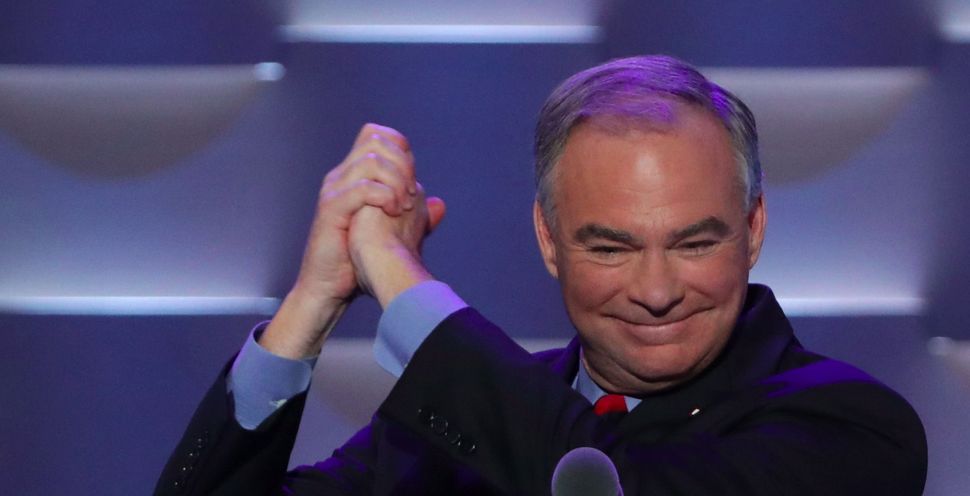 Senator Tim Kaine, Hillary Clinton’s pick for vice president, is a devout Catholic who sings tenor in the choir of the church he has attended regularly for 30 years. As he reminded his fellow Democrats last night, he went to a Jesuit high school and worked with Jesuit missionaries in Honduras. He quotes freely from the Bible.

And he has a very Jewish way of squaring faith and politics.

“Tim sees his faith, in Jewish terms, as ‘dina de’malkhuta dina,’” said Rabbi Jack Moline, executive director of the Interfaith Alliance, who has known Kaine well for 15 years. The Aramaic saying, dating back to the Talmud, translates roughly as “the law of the kingdom is the law.”

It’s the rule that says the law of one’s country is binding, even if, in some cases, it contradicts Jewish law. The concept took root centuries ago as a pragmatic way to justify Jewish acquiescence to gentile rulers, and has found modern expression in some legal disputes in Israel.

Kaine doesn’t use that precise phrase, naturally, but Moline has discussed the concept at length with the vice presidential nominee, dating back to his days as governor of Virginia. “For him,” the rabbi said, “no amount of personal preference, even if based on deeply held religious beliefs, supersedes the Constitution.”

In practical terms, this means that Kaine is personally against abortion, but he is an outspoken supporter of the reproductive rights codified in Roe v. Wade; he’s personally against the death penalty, but as governor he signed multiple warrants for execution.

In political terms, Kaine may be the sign of things to come. He’s not the first devout Catholic to navigate this delicate path; remember the late Mario Cuomo’s brilliant exposition of the role of a Catholic lawmaker back in 1984. Nor is Kaine the only public official on today’s stage to make the distinction between personal belief and public responsibility. Joe Biden, the first Catholic vice president, comes to mind.

But Kaine speaks about his faith more broadly, frequently, warmly and, frankly, more coherently than do many other Democrats. Now that he is on a national ticket, he is helping to redefine what it means to be a politician of faith at a time when we are witnessing a wider renegotiation of faith and politics.

The model of the super-religious, uncompromising public official — think of Kim Davis, the Kentucky clerk who refused to sign marriage certificates for same-sex couples — makes headlines, but that style is going out of style. This election, in particular, has loosened Americans’ once-sturdy expectation that their president be a churchgoing, Bible-quoting, outwardly pious man.

We’ve got a majority of white evangelical Christians supporting Donald Trump, whose character and career have never been associated with piety. We’ve got Bernie Sanders, an avowedly secular Jew, garnering millions of votes and a passionate following. In their own way, both men defy the stereotypes, and represent subtle shifts that have been building for years in the electorate.

And while a notable majority of Americans still believe that it is important for a president to have strong religious beliefs, the share has dropped to 62% from 72% in just eight years, according to recent data from the Pew Research Center,. The decline is true for both Democrats and Republicans.

For those of us who still believe that faith can instruct politics positively and inclusively, Kaine represents an appealing prototype. First, because he privileges upholding the law and the Constitution, even when it causes him deep anguish, as it did when he presided over 11 executions as governor. That attitude represents a challenge to those who wish to bend the law or to ignore its communal weight when it doesn’t suit them.

Second, because his open exposition of his personal beliefs allows us to know where he stands and therefore allows us to imagine how he would act in future situations.

Faith, when taken seriously, anchors us and motivates us. Kaine has said that politicians owe their public the opportunity to know what motivates them. We know what motivates him, and it’s more than political opportunism or personal greed. You may not agree with it, of course, but his expression of values is a blueprint for future behavior.

Third, because he realizes that for America to continue to flourish, we have to be able to make these personal/public distinctions. The anxiety we see now among white evangelical Christians and exploited by Trump is rooted in a fear of a lost majority, a lost way of life. But that fear is rational only if America is a zero-sum game, if one group’s gain forces another group’s loss. It needn’t be that way.

In his memorable address at Notre Dame University, Cuomo elucidated this reasoning as only he could. The “Catholic who holds political office in a pluralistic democracy — who is elected to serve Jews and Muslims, atheists and Protestants, as well as Catholics — bears special responsibility. He or she undertakes to help create conditions under which all can live with a maximum of dignity and with a reasonable degree of freedom; where everyone who chooses may hold beliefs different from specifically Catholic ones — sometimes contradictory to them; where the laws protect people’s right to divorce, to use birth control and even to choose abortion.”

He continued: “I protect my right to be a Catholic by preserving your right to believe as a Jew, a Protestant or a nonbeliever, or as anything else you choose.

“We know that the price of seeking to force our beliefs on others is that they might someday force theirs on us.”

Tim Kaine is reminding us of those wise words today.