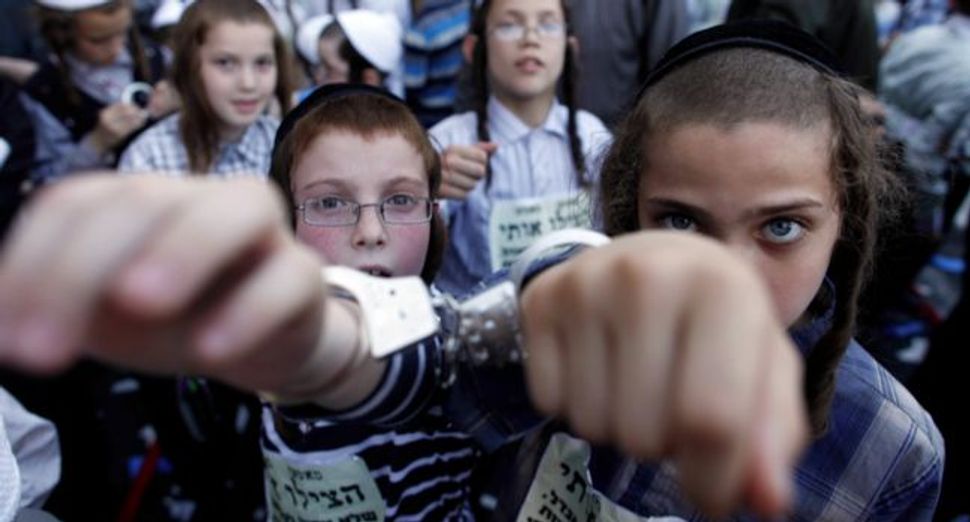 As you read these words, a new law is being hustled through Israel’s Knesset that would abolish all requirements for the teaching of a “core curriculum” in ultra-Orthodox Israeli schools, even those that are partly funded by the government itself.

If the bill becomes law, many young Israelis educated in right-wing Orthodox yeshivot will learn nothing about math, science or history — even though these subjects are (rightly) deemed essential by the same Israeli public that will be underwriting the children’s education. And this breathtaking deprivation of educational basics is being carried out, we’re told, in deference to the rabbinic leaders of the communities involved, who prefer that such “secular” subjects not be taught to their young.

An Orthodox Jew myself, I regard this initiative as a serious attack on the basic rights of children. But to explain what I mean, I have to focus for a moment on the way many of my coreligionists defend such measures.

Yitzchak Adlerstein and Michael J. Broyde recently provided a good example right here in the Forward. They argued that ultra-Orthodox rabbis’ decision to “den[y] the most basic educational tools available to other Americans” to their community’s children should be seen as a “religious freedom problem.” That is, since “compelling secular education will destroy [the ultra-Orthodox community’s] basic religious values,” its rabbis’ right to religious freedom allows those rabbis to prohibit such education — even if that ensures the functional illiteracy of the students.

Adlerstein and Broyde didn’t invent that way of framing the issue; their argument is concerned mostly with how to ensure better secular education for Orthodox children (a goal they clearly favor) without treading on U.S. Supreme Court precedent that includes decision-making power about children’s education among the religious rights of their elders.

Maybe it’s my extensive involvement with issues of child abuse that leaves me so deeply dissatisfied with that whole approach.

There’s an elephant in the room, and the sooner we recognize it the better off our children will be. Why, in all this talk of “rights” and “freedom” in connection with the education of the young, is there so rarely any mention of the rights of the people with the most to lose? Why does “religious freedom” in the arguments we hear about this question invariably mean the freedom of adults — specifically, of rabbis — to impose on children the sort of educational system they prefer, not the sort those children deserve? Why is no one charged with protecting the rights of those young people who, lacking outside help, will have absolutely no say in the sort of education they are allowed to have?

Once you see the issue from this perspective, it’s very hard to accept at face value a discourse about “rights” that enshrines the rights of the powerful (in this case, rabbis and other Orthodox leaders) over those of vulnerable children.

If you think Orthodox leadership would never knowingly define “religious freedom” in such a one-sided way when children face a tangible threat to their wellbeing, think again. Orthodox rabbis made exactly the same sort of arguments when there seemed to be a chance that New York City, for reasons of health, would regulate the use of the controversial rite metzitzah b’peh, oral suction of blood from a baby’s penis during circumcision, as prescribed by the Talmud and still practiced by many ultra-Orthodox Jews.

Rabbi Aaron Glatt, affiliated with the more “modern” wing of today’s Orthodoxy, insisted that this too was a matter of religious freedom: “I would hope that everybody in the Jewish community would be advocating for the total ability of every Jewish person to practice their religion…. [I]t’s not something that should be in the newspapers or regulated by the Department of Health.” Rabbi Avraham (“Romi”) Cohen anticipated Adlerstein and Broyde in appealing to the U.S. Constitution: “We have a Constitution that gives us freedom of religion,” he said. “Now that freedom is being threatened.”

In the rabbis’ formulation, the possibility that the infants might contract herpes didn’t matter — in a word, the children didn’t count. Though their lives were the ones that might be at risk, Jewish infants were not among the rabbis’ “us,” were not part of “the Jewish community” and did not enjoy the protection of the Constitution invoked by Rabbis Glatt and Cohen. For them, religious rights belonged exclusively to the rabbis who would decide how to impose their idea of “religious freedom” on their children.

The same distorted thinking is at work in connection with the proposed waiver of “core curriculum” requirements in ultra-Orthodox Israeli yeshivot. If it passes, the measure will be hailed among Haredim as a victory for religious freedom, and defended by the government on grounds of “sensitivity” to the needs of religious communities.

In my view, it is neither. What the bill envisages is a form of collective child neglect — one imposed by those among the ultra-Orthodox with the power to get away with it, aided by a compliant secular government that, like rabbinic leadership, is prepared to define “religious communities” as if they consisted only of adults, as if their children were mere objects to be used however the grownups see fit.

This is not about protecting “religious freedom.” This is about restricting freedom so as to exclude the most vulnerable members of religious communities from its scope.

I sincerely hope the bill fails. But for me, that isn’t the real point. My message is meant mainly for those in my Orthodox Jewish community who have either sought such measures or, like Adlerstein and Broyde, are still prepared to describe them in the language of “religious freedom.” And the message is this: How long are we going to talk about the “rights” of religious Jews in language that shows we haven’t even started to think about the rights of our children?