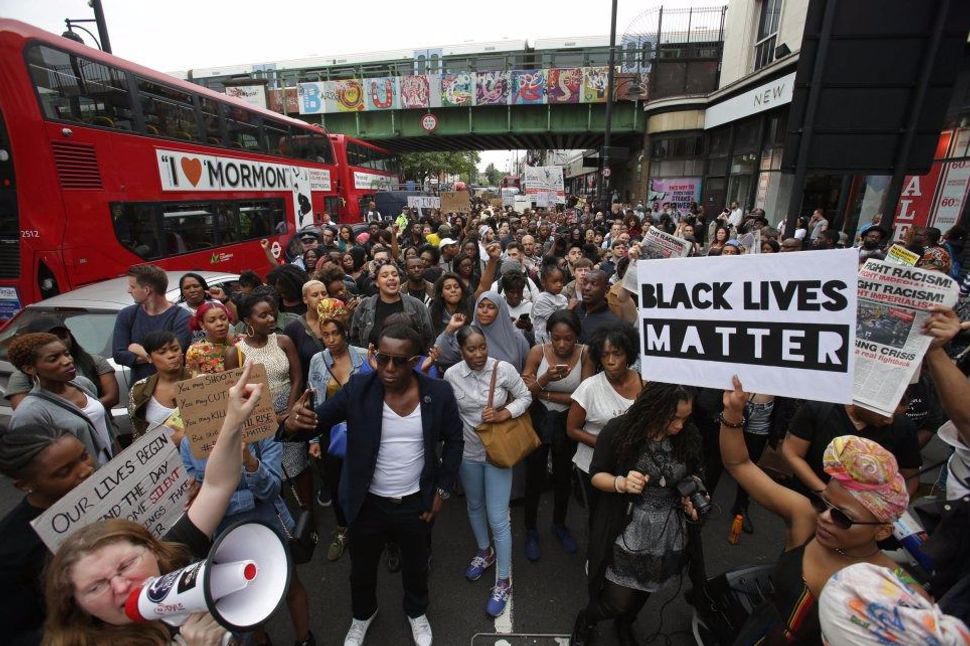 Until now, Black Lives Matter has been seen as a U.S. movement; its website lists Toronto as its only international chapter. That all changed on Friday, as Black Lives Matter U.K. hit the headlines when, as part of a coordinated day of action, the movement blocked roads across the U.K., most notably the route to Heathrow Airport.

Not that the spreading of the campaign to Britain should come as any surprise. There’s a long an ignoble history of people of color dying at the hands of the British police, from Blair Peach and Joy Gardner to Anthony Grainger and Jean Charles De Menzes. The police shooting of Mark Duggan was the trigger for the London riots of 2011. The campaign for racial justice in the U.K. has previously been led by groups like London Black Revs and Sisters Uncut. But the name Black Lives Matter has become well known from successful U.S. campaigns, and its use will definitely raise the profile of these issues.

Particularly significant in Friday’s actions is the highlighting of Britain’s immigration policy, and how it imposes violence on those seeking to come to, or remain in, Britain from southern Europe, North Africa and the Middle East. In 2010 Jimmy Mubenga died on an airplane, while being forcefully repatriated to Angola, yet the private security guards who caused his death were later found not guilty of manslaughter. This year, Amir Siman-Tov, a Jewish Moroccan, died while being held in an immigration detention center in West London.

It remains to be seen how British Jewish leaders will react to Friday’s actions, but it seems likely that attitudes of the British leadership will mirror those of U.S. Jews.

The British Jewish community has a complex history when it comes to questions of racial equality. In the postwar period, British Jews preferred to self-define as a religious rather than an ethnic minority; the community was disinclined to endanger its hard-earned respectability and acceptance by advocating the rights of more recently arrived immigrants. In the 1970s and 1980s, important work was done by groups on the fringes of the community, such as the Jewish Socialist Group and the Jewish Council for Racial Equality. Only in the late 1990s, once it became politically safe to do so, did the community’s leadership move toward an explicitly pro-multicultural position; even then, they mostly spoke out only on issues of Jewish concern.

In recent years, there has been Jewish community organizing especially around the Syrian refugee crisis, with the Reform, Liberal and Masorti movements calling on the government to give refuge to Syrian children, comparable to the Kindertransport program of the 1930s that brought around 10,000 German Jewish children to Britain. Such an approach lies within the traditions of the community: charitable and politically neutral activity. But it’s hard to imagine any U.K. Jewish groups outside the radical fringe supporting direct action such as was seen Friday. When it comes to Black Lives Matter U.K., most Jews will be broadly supportive of the movement’s goals, but little will be said publicly.

If, however, the movement starts commenting on issues around Israel/Palestine, the community’s response is likely to move from quietly supportive to actively hostile. The Jewish community is extremely active in advocating for Israel, and key figures such as Chief Rabbi Ephraim Mirvis and the head of the Board of Deputies Jonathan Arkush frequently defend Israel and its actions in the British media.

There have been several recent incidents in which the Jewish Chronicle and the communal establishment have gone to battle with people of color due to their position on Israel and perceived tolerance of anti-Semitism. Malia Bouattia, the recently elected president of the National Union of Students, was criticized for her explicitly anti-Zionist politics, which, Jewish critics argued, had crossed the line into anti-Semitism. Jackie Walker, an activist who defines as being both black and Jewish, was condemned by communal figures for suggesting that Jews, including her ancestors, had been chief financiers of the slave trade. Most recently, Shami Chakrabati, a prominent civil-liberties advocate, received flak for not having been tough enough in her report into allegations of anti-Semitism in the Labour party, and for accepting a peerage in the wake of it.

Just like in the U.S., Israel/Palestine is a significant barrier to greater U.K. black-Jewish cooperation and activism. Despite significant disagreements with Benjamin Netanyahu’s government, the majority of British Jews consider themselves pro-Israel, while most non-Jewish activists of color are broadly in sympathy with the U.K.’s large Palestinian solidarity movement. If Black Lives Matter U.K. chooses to campaign around Israel/Palestine, it is hard to imagine that it won’t take a pro-BDS stance. Unsurprisingly then, it is non-Zionist groups like Jewdas that have the closest connections with racial justice activists, and, tellingly, both Rene Cassin (a Jewish human rights body) and Tzelem (a group campaigning on issues of social and economic justice) explicitly exclude Israel-Palestine from their remits, in order to avoid controversy within the Jewish community.

This divide exacerbates the erasure of Jews of color. While the majority of British Jews are Ashkenazi, the significant minority that are not are frequently forgotten, and there is no U.K. equivalent of Bechol Lashon or the Jewish Multiracial Network. Black Jews like Jackie Walker are beyond the pale. Whatever their ethnicity, Jews are welcome in the mainstream of the community only if they support Israel.

British Jews are broadly socially liberal and progressive, but they are also deeply attached to Israel, whose government grows ever more right-wing, alienating potential Jewish allies in the diaspora. Eventually Jews in Britain may be forced to choose between their Zionism and their liberal values, but until they do, it is hard to imagine the community giving full-throated support for the racial justice movement in the U.K. For the British Jewish community, black lives matter, but Jewish lives matter even more.