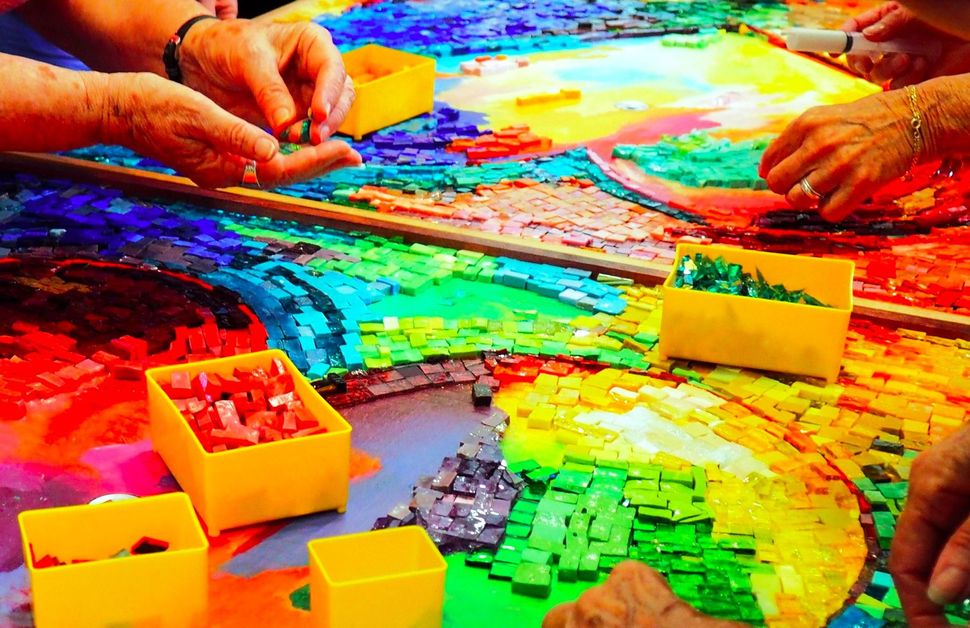 The many issues that divide people in Israeli society tend to drag me down, so I try to focus on projects that build community to hearten and inspire me. Since December, I’ve been involved in one such endeavor that’s connecting people regardless of religion, background or age.

As a liaison in Galilee Medical Center’s International Affairs Department, I’m shepherding Heart and Soul, a public art project for our new cardiology department (currently under construction), around the Western Galilee with Israeli artist Yael Buxbaum. Yael and her cousin, artist Joani Rothenberg from Indianapolis, give renewed meaning to the symbol of the heart with their design of a bright colorful four-panel mosaic being tiled by people of different cultures and faiths.

At least once a week Yael comes to the medical center and anyone who wants to share in creating Heart and Soul can work on the mosaic. The artwork offers patients, visitors and staff members an opportunity to unwind from the pressures of their lives. Since community involvement is a key factor in the project, we also bring it to places throughout the Western Galilee so that people from different walks of life can have a hand in its creation. The project is in collaboration with St. Vincent Indianapolis Hospital, where Joani is overseeing work on four similar panels. When the mosaics are completed, each hospital will gift two of its panels to the other for display.

GMC, the largest institution in the Western Galilee, serving approximately 600,000 residents who live in the cities, towns and villages along Israel’s northern border, is a window into the multi-layered society of northern Israel. The staff, volunteers and patients reflect the variety of ethnic groups and religions, including Jews, Muslims, Christians, Druze, Circassian and large immigrant communities from the former Soviet Union and Ethiopia, all of whom populate the region. Heart and Soul is accessible to all, and the mosaic, formed by putting together small colored pieces of glass called smalti, is an apt metaphor for the medical center and the area. 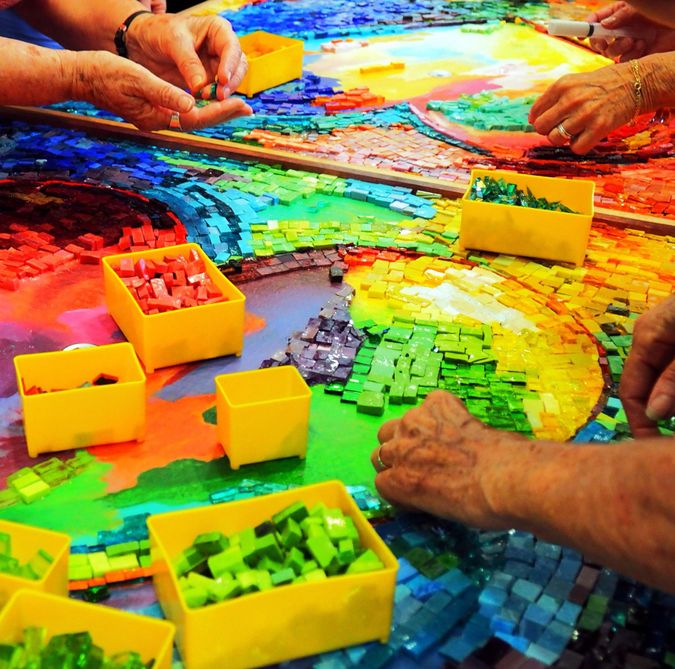 So far we’ve brought the project to Druze and Arab villages, kibbutzim, Nahariya’s library, a community center for the visually impaired, a home for teenage girls at risk, senior citizen centers, schools and Nes Ammim, a European Christian village, to name just some of the places.

Recently we visited IBDAA (Association for Developing the Arts in Arab Society) Gallery in Kfar Yasif village, where an Arab and Jewish women’s dialogue group called NAIMA chatted over refreshments and worked on Heart and Soul. NAIMA, a Hebrew acronym for the words “Arab and Jewish Women Fostering Equality,” fittingly means “pleasant.”

The group has been meeting biweekly for over a year to widen and deepen the women’s knowledge of each other’s way of life, social norms, religious customs and folklore through sharing their own personal experiences. They believe that their connections are influencing not only themselves but also their family circles, social circles and wider communities. NAIMA’s work on the mosaic, like others who have contributed, goes hand in hand with the vision behind Heart and Soul.

These outings broaden my horizons and understanding of art as a universal language that all can relate to and enjoy. Similar to putting the pieces of a jigsaw puzzle together, working on the mosaic offers the challenge of finding the right shade and fit for each tile. Many find plugging away on Heart and Soul to be therapeutic and meditative. While people glue their glass pieces into place, they often share their stories, which seem to become embedded into the work along with the smalti. As progress on Heart and Soul continues, I’ve come to appreciate it as an instrument that fosters sharing and caring and reflects the beauty of the colorful palette of people and places that contribute to its creation.

The heart, a symbol of love, also suggests life, the future, energy and good health. Everyone who adds a tile to the mosaic knows that it will help form a welcoming environment for the medical center’s long-awaited new cardiology department. The artwork will create a healing setting that will favorably affect patients’ inner world as well as that of their family, friends and staff. I am continually moved to see that all who lend a hand to Heart and Soul feel inspired by the joint effort that promotes a sense of community.

Sharon Blassberg Mann lives in Nahariya with her husband and three children. She is a Liaison in Galilee Medical Center’s Department of International Affairs. Her writing has appeared on ReformJudaism.org