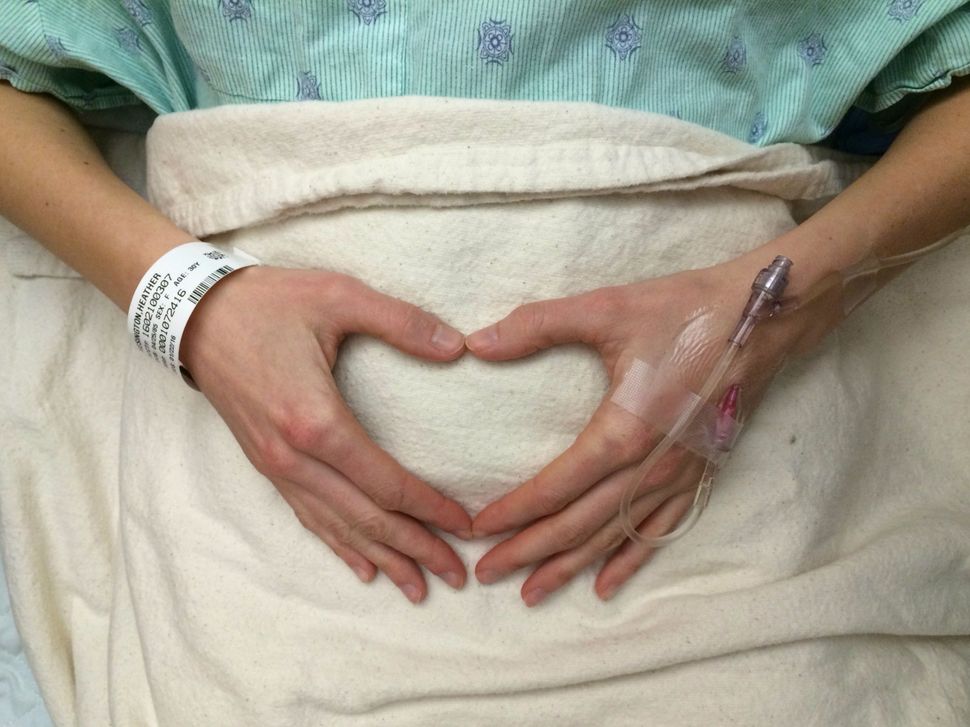 As Sarah and her husband were checking off last-minute wedding preparations and appointments, they got a suggestion from their rabbi. He asked them if they’d been genetically tested for diseases common among Ashkenazi Jews. The couple, both Ashkenazim, took the rabbi’s advice and headed to their local JCC for a blood test. They figured it was just a precaution and waited for an all clear.

The outcome was unexpected: Both Sarah and her husband had mutations of the CFTR gene, making them carriers of cystic fibrosis. After hearing their results, they went to a genetic counselor, where they learned about their relatively high likelihood of passing cystic fibrosis on to any children they might have. Though shaken by the news, they decided that it didn’t change the fact that they wanted to start a family together, and they happily married as planned.

“I would have never thought to get tested,” Sarah said, “and I’m thankful we knew what we were going into. I’m glad my rabbi suggested it, and I’m kind of like, gosh, wow, all these people out there rolling the dice and don’t know what they’re bringing to the table when all they have to do is get genetic testing. I’m thankful that I knew about it, because otherwise…my doctors never said anything, my non-Jewish friends were just like, ‘What? You got tested?’ It was helpful to know even before embarking on a family that this was a possibility in our future. You don’t get as blindsided that way.”

About a year into their marriage, they learned Sarah was pregnant, and were understandably nervous. They decided not to tell anyone at first, because they didn’t know what the genetic lottery had in store for them.

“It changes things,” Sarah said. “You sort of lose your pregnancy experience, because you want to post ultrasound pictures after four weeks, but anything can happen with us, so we can’t.”

After an anxious wait, they were relieved to find out that the fetus had inherited the gene from only one parent: Their son or daughter would be a carrier for cystic fibrosis, but would not be afflicted with the disease. Thrilled and relieved, Sarah carried the pregnancy to term, and gave birth to a healthy baby boy.

Bolstered by their success, they were hopeful when Sarah got pregnant a second time. Her second pregnancy felt just like the early stages of being pregnant with her son: mild nausea, but otherwise no difficulties. However, when she went in for a routine ultrasound, the fetus showed abnormalities. There was a bright spot on the bowel. That sort of bright spot could have meant any number of things, though, and Sarah needed further tests to know for sure. She was prescribed a chorionic villus scan, and a long, thin needle was inserted into her abdomen to extract the prognostic information that would change their lives.

The results confirmed their fears: The fetus was positive for cystic fibrosis. Sarah and her husband, rocked by what they’d been told, began exploring their options. What would this mean? If this child was born, what would its life be like? Cystic fibrosis can vary in terms of severity, but doctors told them that because of their unique gene combination, their child was likely to be born severely disabled: She would probably not be able to move, breathe or eat on her own and would be in near-constant pain and discomfort. They met with parents and nurses who cared for severe cystic fibrosis patients and took in the reality of what that would look like on a day-to-day basis. After consulting with their rabbi and their therapists, they ultimately made the difficult decision to terminate the pregnancy. “At the end of the day,” Sarah said, “I didn’t want to bury a child and see a child suffer.”

When it came to the procedure itself, Sarah met resistance. Because of the abortion laws in her state in the Southeast, she could not undergo the termination with her doctor, who had guided her through her first pregnancy. Though her doctor told her that she would love to help her, she was legally unable. “I felt that it was just…of course it wasn’t her fault,” Sarah recalled, “but the laws in my state are completely backward. I decided not to have a really sick child with a deadly disease, which I feel like is pretty understandable. In that sense, I was just like, I can’t believe it. It’s ridiculous.”

As it turned out, Sarah’s doctor knew one of the doctors who practiced in the clinic she would need to attend. This allowed her to bypass the usually-mandatory counseling, which would force her to justify her emotionally devastating decision over and over. Still, there were some obstacles that she couldn’t avoid: Once Sarah had waited weeks for the diagnosis, then finally decided on having the procedure, she had to wait an additional three agonizing days due to a legal mandate. The wait, which is ostensibly meant to encourage women to make “informed” decisions, was a slap in the face to Sarah, who had already made her informed decision, and felt she should not have been doubted.

“It was horrible”, she said. “To wait. It’s just too bad. I know other states do things differently. I would love to have laws change for people. Looking at our legislature today, I’m like, are our laws moving backward? That’s the concern. It’s already a horrible thing to go through, and this is just like rubbing salt in the wound.”

Women in situations like Sarah’s are often asked if they would make the same decision again. For her, this wasn’t a hypothetical: She went through the same process with another cystic-fibrosis-diagnosed pregnancy, which, upon contemplation, she also decided to terminate.

“It’s been a tough year and a half,” she said, “but I don’t have any regrets. Knowing what I do know about the disease, it’s not a life I want to give to a child.”

Though Sarah feels that what she calls the “God-gave-us-what-He-gave-us” attitude is perfectly legitimate if that’s what a woman feels comfortable with, she is glad that she underwent amniocentesis. “If we hadn’t known”, she says, “then of course we would have had a child with severe cystic fibrosis, and we would go through life dealing with that.” But, ultimately, granted the information she was granted, she does not believe that would be the right choice. “Just to have the choice, even though it’s a hard choice,” she said, “was essential.”

Lana Adler is the Forward Summer Fellow in opinion. Find her on Twitter @Lana_Macondo