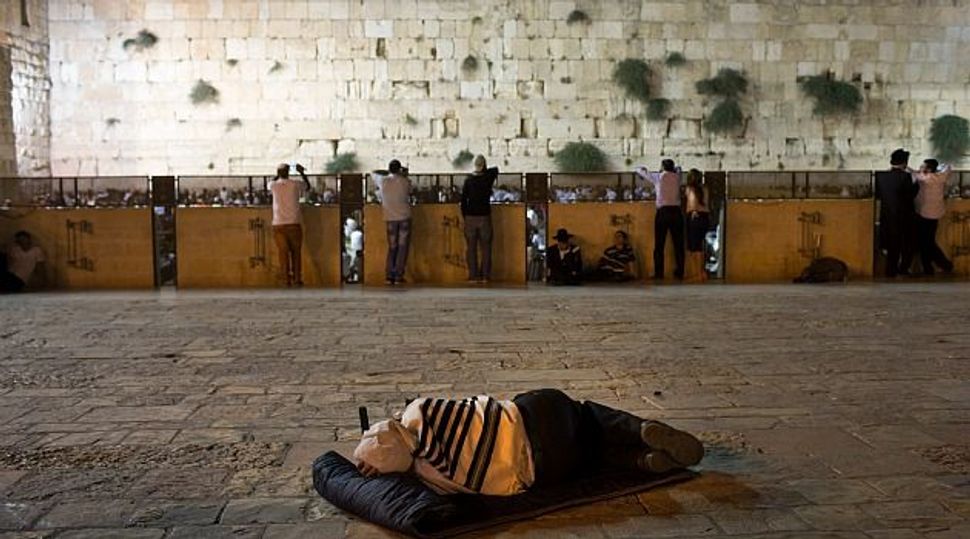 Sharing the Holy City: Observant Jews pray in mourning for Tisha B?Av at the Western Wall Image by getty images

This week we marked Tisha b’Av (the ninth of Av), a date commemorating a series of horrific events throughout Jewish history. According to rabbinic tradition, these spanned from the destruction of the first Temple in Jerusalem in 587 BCE to the 1942 liquidation of the Warsaw Ghetto. While one common thread binding these calamities is persecution by gentiles, the rabbis of old also turned inward for explanations. They were perceptive and bold in attributing responsibility to the Jewish community. Was their soul-searching merely an exercise in history, or should we draw contemporary lessons relating to these very days?

Rabbinic introspection left us with the following mindboggling statement in Tractate Bava Metzia 30b: “Jerusalem was destroyed because the rabbinic courts strictly applied din Torah (Jewish legal judgments) rather than allowances of lifnim mi-shurat ha-din (equity).” The Talmud acknowledged that the Divine Torah law, strictly applied, may cause destruction!

The other classic rabbinic explanation for the second Temple’s destruction is sinat hinam (baseless hatred). The famous story of Kamtza and Bar Kamtza, often quoted, demonstrates the extent to which intolerance and hatred can deteriorate into destruction. The rabbis did not spare their predecessors the lion’s share of responsibility, claiming that such instances of abuse and humiliation took place in the presence of the rabbinic leadership, who held their peace, rather than counter the hatred and heal the community.

The first example placed the responsibility upon the overzealousness of the adjudicating rabbinate. In the second example, responsibility was attributed to the rabbinic leadership due to its inaction in the face of social strife. Rabbi Naftali Zvi Yehuda Berlin of Volozhin (the Natziv, 1816-1893) critically describes people in Second Temple times who deviated from the Divine Will, as they labeled fellow Jews “Sadducees” for pursuing a religious path not identical to their own, and at times did not even refrain from bloodshed, “for the sake of Heaven,” bemoaned the Natziv. Sounds familiar, doesn’t it?

Israel faces numerous challenges. Many come from outside, stemming from anti-Semitism, the refusal of neighboring countries to acknowledge the Jewish people’s right to a national home, the lack of natural resources, security costs, etc. These are well known, and Jews throughout the world support Israel in facing them. However, to do justice to Israel’s existential challenges, especially during these days of Jewish soul searching, we must emulate the rabbis of old, look boldly at our own religious scene, and identify the threat it poses to Israel’s social cohesiveness and Jewish unity. The hateful rhetoric and theocratic pressures stemming from today’s self-righteous Israeli rabbinic and political leadership, aiming to de-legitimize the “other,” is reminiscent of the Talmud’s focus on sinat hinam and the threat of Din Torah as a catalyst in weakening society.

In the past year, Deputy Minister Meir Porush of the ultra-Orthodox United Torah Judaism party called for the Women of the Wall to be thrown to the dogs, and his colleague MK Moshe Gafni proclaimed Reform Jews (a catch-all phrase for all Jews who are non-Orthodox) a bunch of clowns who stab the holy Torah. MK Rabbi Eichler (also of UTJ) labeled Reform “mentally ill” and secular Jews “two legged animals.” Shas party leader Minister Aryeh Deri announced, “They will not get any recognition. In Judaism there is only one stream,” and his Shas colleague Minister of Religious Services David Azoulay said that he has a difficulty considering them Jewish. Not to be outdone, Rabbi David Yosef, son of the late Rabbi Ovadya Yosef, charged that the Reform movement “is a collaboration with idolatry,” while Rabbi Yig’al Levenstein, cofounder of a renowned, state-funded pre-military academy, publicly said that “Reform is a stream of Christianity” and gay people are perverts.

These are the modern parallels of the label “Sadducees,” which led to the Natziv’s lament of sinat hinam. Today’s “others” include not only the non-Orthodox Jewish streams, but also women, LGBTQ, modern Orthodox Jews — and even Haredim with differing views. Shortly after Rabbi Ovadya Yosef z”l approved of conversions done in the IDF, graffiti was seen in the ultra-Orthodox Jerusalem neighborhood of Me’ah She’arim, which dropped his rabbinic title and labeled him “Reform!”

Hiddush’s polling has shown that 71% of Israeli Jews perceives the Rabbinical Courts’ rigid rulings, as well as the anachronistic Chief Rabbinate’s monopoly over kashrut, burial, marriage, divorce, etc., and their refusal to accept the legitimacy of even modern Orthodox conversions and kashrut supervision, as distancing people from Jewish tradition. Clearly, strict application of Din Torah today results in social alienation and strife.

The Jewish people’s challenges today are profound. The threat posed to Jewish unity from our religious leadership steadily gains momentum, unrestrained by a government reliant on the ultra-Orthodox parties’ political support. In the wake of Tisha b’Av, even as we mourn the many historic calamities that befell us, we must also draw brave lessons from our sages of old and reject theocratic fundamentalist pressures and sinat hinam, especially when it’s spewed “for the sake of Heaven”! We need equity, tolerance and compassion. Only the deepest soul-searching and bold action will stave off today’s threat of growing erosion from within.