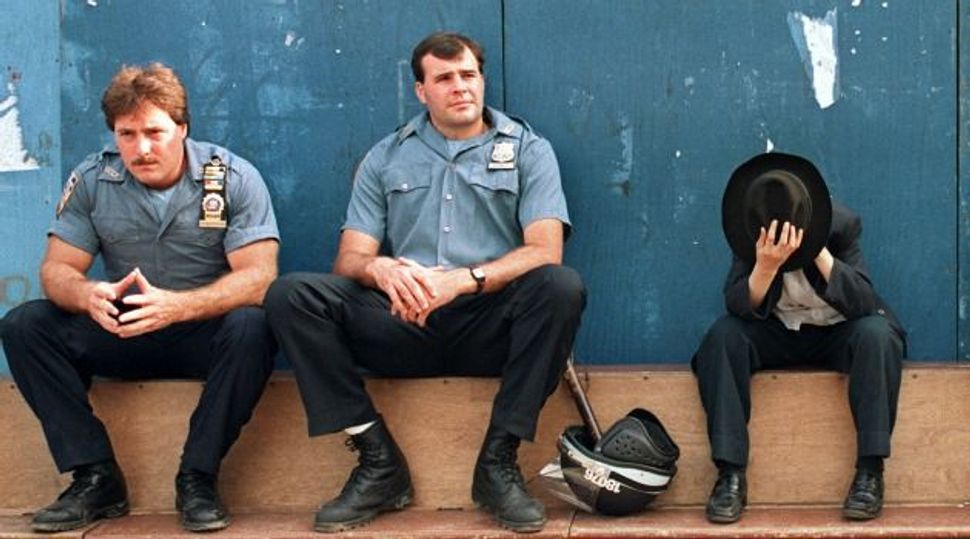 Staying Put: The most enduring lesson of the Crown Heights riots is that the Jews did not abandon the neighborhood after the violence. Image by Getty Images

I was 7 years old when I first heard of Crown Heights.

At the time, growing up in Los Angeles, my entire world felt Jewish. There were Hollywood Jews who worked in the industry like my parents, Russian Jews down the block from our West Hollywood home and Hasidic Jews on Fairfax. Sure, there were non-Jews, but in LA, everyone felt kinda Jewish.

Driving with my mother in the car as the radio played, she suddenly pulled over, visibly upset. Someone on the radio had said something: Jews, she told me, were being attacked in Brooklyn. For the first time in my young life I suddenly felt vulnerable as a Jew. There were riots — and we were the targets.

For the past 10 years, I have lived on the corner of President and Utica. Where steel and concrete once collided, tragically killing Gavin Cato, and leading to the murder of Yankel Rosenbaum, violence, destruction and fear, there is little today that remains the same about the neighborhood. Communication between neighbors, if not perfect, is better; crime is down, and the neighborhood, suddenly hip, is on the rise.

What hasn’t changed is the constant inability of the media to understand this neighborhood and the people who live here.

In 1991, The New York Times and other outlets framed the complex and nuanced web of identities in the neighborhood as reflective of national questions of race. Instead of seeing the conflict as one hinged on the intersectionality of religion, crime, government resources and an undercurrent of anti-Semitism, Crown Heights was simply black vs. white.

Despite accounts on the ground to the contrary — both by journalists and in the Girgenti report, the state’s definitive fact-finding report on the riots — the need to fit the story into its preconceived parameters became paramount. Suddenly the members of the Jewish community, besieged by rioters, were somehow equal partners in the violence on the street.

The echoes of this failure to do journalistic justice reverberate to this day. This week, in covering the 25th anniversary of the riots, the New York Daily News reported, without any basis in reality, that “roving gangs of Jewish and black youth started attacking each other and random pedestrians” during riots — as if somehow cowering Jews along President Street had left their homes under a rain of bricks and bullets to walk out and do battle on Brooklyn’s streets.

Today Crown Heights has been designated as “ground zero for gentrification.” As young white people double-fisting Whole Foods bags and NPR totes have moved to the neighborhood, rapid development has followed in their path.

Where burnt-out tenements and bodegas once stood, there are now posh flats, artisanal taco stands and cold-brew coffee shops. With the changes have come rising rent prices and demographic upheaval. Suddenly a community of working- and middle-class families, both Jewish and black, find themselves no longer able to afford housing in the neighborhood they call home.

The displacement of the African-American and Caribbean-American communities of Crown Heights has been covered at length — in Times, The Wall Street Journal, on WNYC and beyond. Displacement is a horrible thing, and people of color facing institutional racism can be particularly vulnerable.

That said, the gentrification of Crown Heights is something that impacts the entirety of the neighborhood. Among my peers — Hasidic Millenials — the affordable housing crisis has become the single most discussed and most troubling issue. People are looking to East Flatbush and Brownsville if they even consider staying in Brooklyn all together. A friend told me, near tears, of his painful realization that, stuck in a tiny one-bedroom apartment, he would never be able to live in the neighborhood that his parents, grandparents and numerous cousins call home. It was simply impossible to find the funds to stay. He moved to Pittsburgh a few months ago.

Yet this displacement has been completely ignored in the media. Not once has the Jewish community been mentioned in the discussion. And why should they? The story has already been framed: Hipsters move in, black people are displaced — and the eternal Jew stands in the middle. Yes, there are Hasidic Jews, almost entirely not from Crown Heights, who are active in real-estate development. But even in their respective neighborhoods they make up only a tiny sliver of the community. Yet somehow Hasidic Jews of all types — teachers, scribes, plumbers, online merchants and small business owners of all backgrounds — have been relegated to only one role: the trope of the Hasidic landlord.

Hasidim are cast into the anti-Semitic stereotypes of old when it comes to Brooklyn. They are the alien force that preys upon the innocent, ever present but always foreign.

These issues are not new: One of the chief misconceptions among the black communities of Crown Heights was the belief that the Jewish community controlled all the resources and owned all the property — even though analyses of data then show conclusively that, by and large, the Jews of Crown Heights were no better off than their black and Caribbean neighbors.

When Al Sharpton referred to the community of Crown Heights as diamond merchants, the dangerous implications of the slur were clear to all.

Today, depicting the entire community as active in the displacement of others, and not as victims of the same displacement, is dangerous. We can only hope that this time around the narrative changes sooner.

We recently moved to a block where it seems we are the first Jewish family living there in many years. The first week we were there, a neighbor came to tell us about a block party they were organizing. They had purchased kosher food, so that we could take part as well. I thanked him.

“Listen,” my neighbor told me. “Right now, with everything going on in the neighborhood, all the changes… If we don’t stick together, no one else will stick together for us.”

Mordechai Lightstone is a rabbi, a director of digital communications, and the creator of exceptional experiences for Jews in tech and digital media. Follow him on Twitter @Mottel