Donald Trump’s 7 Meanest Dog Whistles, Ranked From Worst to Not Quite So Bad 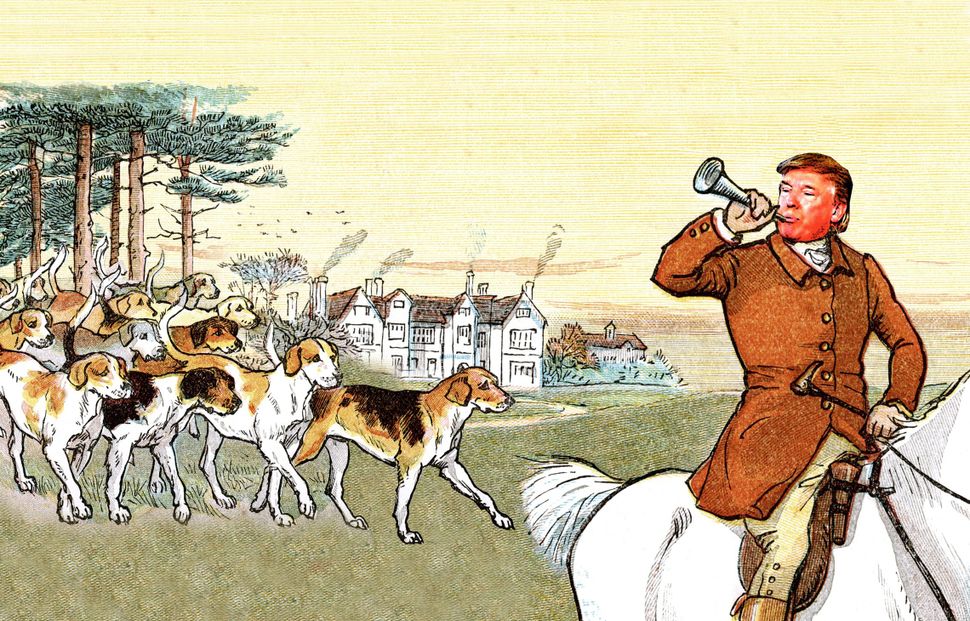 “Dog whistle politics” has been a major part of this year’s election cycle. Like blowing a super high-pitched horn that only bigots can hear, Trump has used hashtags, internet memes, speeches and off-the-cuff rambling to curry favor with a wide range of fringe (and terrifyingly not-so-fringe) groups. He knows that not only do his antics provide a major jolt to those parts of his base, but they also always get picked up by the mainstream media as well — and that just means a lot of free ink.

During the first half of the summer, the media seemed to almost take joy in pointing out Trump’s collection of special whistles (the GOP version of Tim Kaine’s briefcase full of harmonicas). It was like a game of whack-a-Trump.

But then Trump covertly suggested that “second amendment people” might be able to “do something” about Hillary Clinton — what many saw as an obvious threat on her life. In light of Trump’s latest not-so-secret message in a bottle to his base, it seems like a good time to recount his worst offenses.

Below are some of Trump’s most mind-boggling dog-whistles, ranked in order from most to least likely to incite physical violence.

At a rally on August 9, in a segment of his remarks on the Supreme Court, Trump told a North Carolina crowd, “Hillary wants to abolish — essentially abolish — the second amendment.” He suggested that she would stack the Supreme Court with pro-gun reform justices, and that, if she won, there would be nothing they could do about it. Except…

“Although the second amendment people, maybe there is, I don’t know,” he added, to a few cheers from the crowd.

Many voices in the media immediately called Trump’s comments a “wink wink” and a dog whistle to would-be assassins of Hillary Clinton.

Twitter blew up, both with gun owners trumpeting their support for Trump’s statement and everyone else airing their shock.

This is how “second amendment people” take care of things when they don’t get what they want. #trumpelectionobserver pic.twitter.com/oWycElvfQV

It must be the responsibility of all Americans to condemn @realDonaldTrump’s remarks & the violence they suggest.

Don’t treat this as a political misstep. It’s an assassination threat, seriously upping the possibility of a national tragedy & crisis.

In a widely-cited op-ed, Thomas Friedman compared Trump’s statement with the rallies against the 1995 Oslo Peace Accords presided over by Bibi Netanyahu. Shortly after the rallies, in which Jewish protestors depicted Yitzhak Rabin as an SS officer and as Hitler, Rabin was assassinated by Yigal Amir, a Jewish ultranationalist. 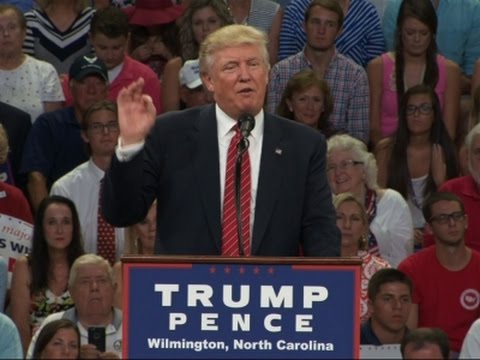 During the first week of August, Trump began to up his rhetoric around the “rigging” of the impending presidential election. He had been making comments about a generally rigged system early in the summer — mostly in order to appeal to Bernie supporters — but starting on August 2 the tenor of his words changed.

“If the election is rigged, I would not be surprised,” he told The Washington Post. “The voter ID situation has turned out to be a very unfair development. We may have people vote 10 times.”

In an op-ed for the Washington Post, Janell Ross wrote that Trump’s rhetoric around voter fraud is aimed at conservative pundits and voters who think minorities are the most likely to commit fraud and try to rig elections.

Trump’s website now has put a call out for “observers” to watch for voter fraud at polling stations, and stop “Crooked Hillary” from “rigging the election.” This is all despite the fact that circuit courts have ruled several times over in recent months that 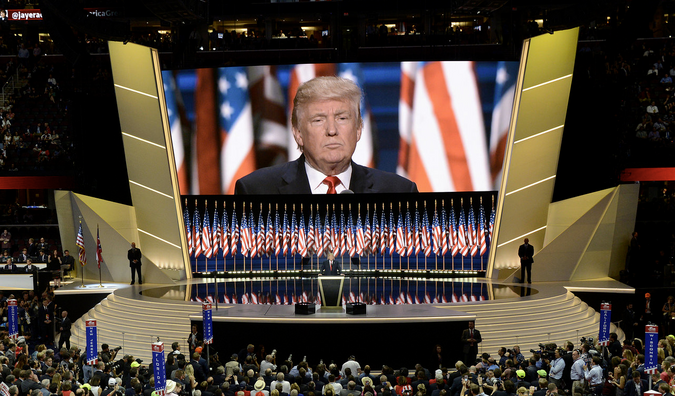 Trump giving his acceptance speech at the RNC in July. Image by Flickr

Trump’s acceptance speech on the last night of the Republican National Convention was textbook fear-mongering. Trump rattled off endless crime statistics and pondered the kind of leader that would be fit to preside over a country in such dire straits.

“Our convention occurs at a moment of crisis for our nation,” Trump said, his hands gripping a funereally black podium. “The attacks on our police, and the terrorism in our cities, threaten our very way of life. Any politician who does not grasp this danger is not fit to lead our country.”

Black Lives Matter activists and black community leaders spoke out against Trump’s speech, particularly in the section of his speech detailing the decay of American cities. They said that it catered to people who believe in policies like the “war on drugs” or “broken windows” — campaigns that ended up hurting and dividing the communities they were ostensibly meant to help.

“The speech lends itself to be interpreted as isolating and scapegoating of communities of color,” Judith Browne Dianis, executive director of the voting rights group the Advancement Project, told NBC News. “It is concerning that, for some people, the ills to which Donald Trump pointed may be interpreted as caused by communities of color, rather than by a corrosive system where people of color have been terrorized and brutalized for centuries.”

As one of our writers also noticed, the GOP seemed to make some overtures to anti-Semites and racists through its deafening silence on the bigoted, hateful comment section that ran alongside the livestream of the event online. 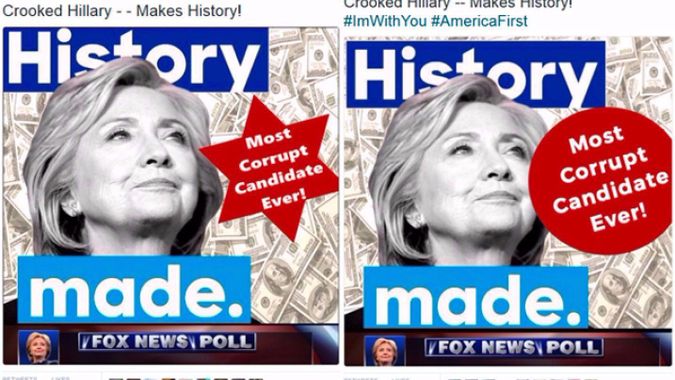 Trump’s original tweet, at left, and the altered version. Image by forward

Trump famously tweeted a graphic wondering if Hillary Clinton was the “most corrupt candidate ever” from within the confines of a conspicuously six-pointed star. Many observers immediately jumped on what they saw as obvious anti-Semitism.

Would be easier for Trump to dodge the star business if Trump supporters weren’t constantly tweeting anti-Semitic stuff at Jewish reporters.

The Trump campaign said that it was just your ‘basic star,’ or a sheriff’s star, and that it represented the Old West-style judgment that Trump would inevitably bring to Hillary.

But when it was revealed that the graphic had come from a message board rife with neo-Nazi graphics, it was clear what the intention of the graphic was – as well as its intended audience.

In a (teleprompted) speech on foreign policy last week in Ohio, Trump told the crowd, “Hillary Clinton wants to be America’s Merkel.” A few in the crowd voiced their approval of the comparison, but the line was mostly met with silence. After the speech, Trump’s campaign put out two press releases that referred to Clinton as “America’s Merkel” and he tweeted his new nickname, and the source of the evidence for the comparison.

As Think Progress noted, Merkel’s name recognition in America is too low for the nickname to have been a popular rhetorical device — over a third of Americans have no opinion of her at all, according to the Pew Research Center.

What was most likely, Think Progress concluded, was that Trump’s “nickname” was a dog whistle to the ultranationalists who so love him — and to his supporters in Europe. Merkel is widely vilified by ultranationalist movements there — particularly by Generation Identity, which released a video called “A Declaration of War” against Merkel and other European leaders trying to find homes for Syrian refugees.

6. That time when Trump made Breitbart his campaign manager

It’s no secret that the so-called “alt-right” is a great big fan of Donald Trump. From the brash, media crazy Milo Yianniapoulos to the neo-Nazis at the Daily Stormer, the alt-right has been more than happy to embrace their “daddy,” as Milo calls him.

But when Trump hired Steve Bannon, formerly the chairman of the alt-right mouthpiece Breitbart, it was a veritable love song to the internet racists and white supremacists who can’t get enough of the Donald.

Breitbart shouted out a series of articles making fun of virtually every news article to report on the development. If Milo Yiannapoulos hadn’t been booted from Twitter for leading a racist cyberattack on Leslie Jones, maybe we would have heard something laughable from him as well.

In his RNC speech, Trump made an isolationist pitch for the 21st century.

“The most important difference between our plan and that of our opponents, is that our plan will put America First,” he said. “Americanism, not globalism, will be our credo.”

Though globalism is sometimes used as an antonym to isolationism, or “Americanism,” Media Matters speculated that the term was an appeal to Trump’s more conspiracy-minded supporters. Alex Jones, in particular, is a radio host and conspiracist who is constantly talking about “globalism.”

“Jones frequently invokes “globalists” as the villains behind the various conspiracy theories he discusses on his radio show,” Matt Gertz wrote. “He believes that a New World Order of global elites is working behind the scenes to rule the world through an authoritarian government and eliminate 80 percent of the world’s population.”

Though the scheme in question sounds dangerous, we’re not worried about the conspiracists who peddle it inciting any real violence. They mostly stay glued to their computers.

Donald Trump’s 7 Meanest Dog Whistles, Ranked From Worst to Not Quite So Bad