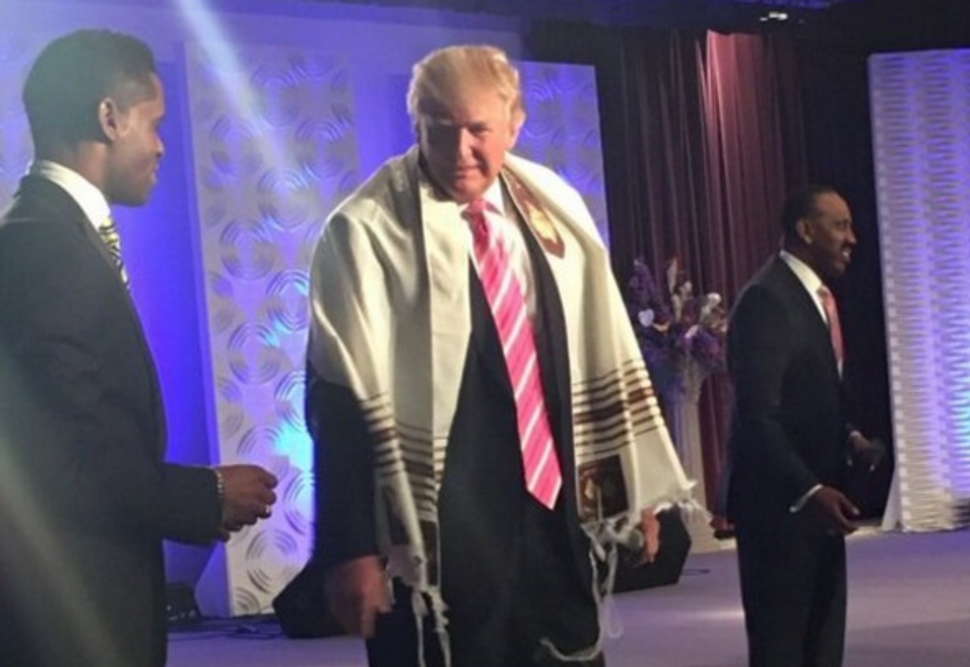 “This is a prayer shawl straight from Israel,” Detroit pastor Bishop Wayne Jackson said as he draped a tallit around Donald Trump’s shoulders on Saturday, casually appropriating a Jewish ritual item for Christian purposes.

Trump, who had just addressed the Great Faith Ministries, a black church, in an attempt to make inroads with African-American voters, accepted the gift with a smile. Immediately, the Jewish Twittersphere exploded — not just because of the inappropriateness of this appropriation, but probably also because it was especially galling to see Trump, a man who has stoked “alt-right” anti-Semitism in this country, wearing this symbolic Jewish garment.

But what about the pastor — what was he thinking? Does he, like some other Christians, think that adopting elements of Jewish ritual makes their worship more “biblical,” and therefore more authentic? Does he think that Jesus wore this same type of “prayer shawl,” and therefore Christians should wear it to emulate Jesus? If so, the pastor badly needs a history lesson, because this whole business with the tallit is historically ridiculous. Imitating Jesus by wearing a modern Jewish prayer shawl during morning prayers? Just…no.

In the religion known as rabbinic Judaism, rectangular garments are required to have knotted tassels on the corners, following the Torah. According to the scholar Dafna Shlezinger-Katsman, in Jesus’s era, people in the eastern parts of the Roman Empire routinely wore a rectangular thing called a pallium, and therefore people who wanted to observe rabbinic Judaism probably put tassels on their pallia. (In more fashion-forward parts of the empire, they wore togas, which were elliptical and therefore didn’t require tassels.) A tassel-equipped pallium is what the early rabbis were probably referring to when they said “tallit.”

In a sense, this tallit was a bit like a “Make America Great Again” baseball cap. For the initiated, it signifies membership in a particular group. For everyone else, it’s just a cap with a slogan. According to Steven Fine of Yeshiva University, the tassels on the religious Jews’ pallia probably stood out to those in the know, but those who weren’t savvy to the significance wouldn’t have cared especially.

Jesus may or may not have worn a tallit, depending on whether he was the type who wore pallium and whether he was inspired to mark himself as part of the rabbinic in-group by attaching tassels to it. We might recall that Matthew was not overly keen on that kind of social parading (see chapter 23 of his gospel); quite possibly Jesus, too, thought there were more important issues to focus on.

.@realDonaldTrump given prayer shawl from Israel after remarks at African-American church in Detroit. pic.twitter.com/BH4M8dCoTr

But this kind of tallit, the tasselled pallium, is just like wearing a baseball cap with a slogan on it — it’s something you might routinely wear, adapted in a way your in-group cares about. It is not a “prayer shawl,” a garment associated with worship services. Having a special rectangular garment with tassels that you wear during prayer seems to have been a late medieval development, according to scholars like Elisheva Baumgarten. Jewish tradition today is influenced by two millennia of developments in practice, including medieval ones, and this kind of tallit (a “tallit gadol,” in Jewish terms) is used by contemporary Jews at certain times to accentuate the experience of prayer.

Some Christians (and some Jews) labor under the impression that Judaism as practiced by Jews today is an exact reproduction of Judaism in all historical periods, going back to Moses. This misconception isn’t new, as Steven Fine points out: a third-century fresco of Moses at Dura Europos anachronistically depicts Moses in Roman pallium with tzitzit, or fringes. And so some Christians who want to imitate the actions of the historical Jesus suppose that he worshipped exactly as modern Jews do, and thus a mass-market prayer shawl “straight from Israel” somehow, nonsensically, becomes imitatio Dei, behavioral emulation of the Divine.

Jesus didn’t wear a “prayer shawl,” but if you believe he did, you can buy a tallit and put it on and play dress-up-as-Jesus. You can put a tallit on your presidential candidate and pretend that makes him just like Jesus, with all the character traits you want in a leader. Certainly buying a few Jewish ritual items from an online store is a lot easier than persuading Trump to develop the character traits that originally endeared Jesus to his followers.