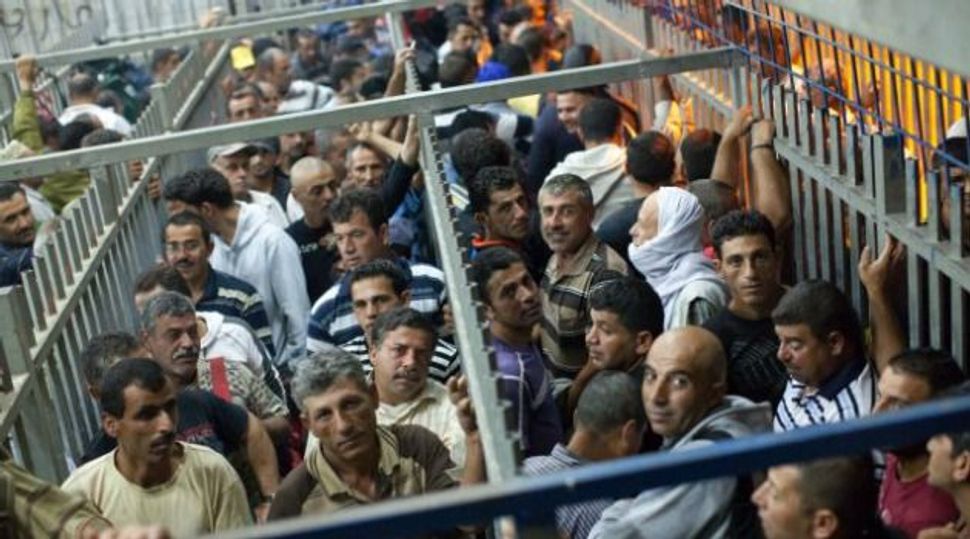 You Call This Life? West Bank Palestinian workers wait an an Israeli checkpoint near Hebron. Image by haaretz

As the 50th anniversary of the Israeli occupation of the West Bank approaches, Israeli peace groups are strategizing. I’ve written before about Daniel Bar Tal’s nascent initiative called Save Israel, Stop the Occupation. Now, two other groups — Blue White Future and Peace Now — have partnered, along with others, to help launch “Decision at 50.” This project urges the Israeli government to hold a nation-wide referendum on the future of the West Bank.

Arguing that “there has never been an issue in the history of Israel which so dramatically affects all aspects of life in the way that the Israeli rule over the Territories has for the past 50 years,” the group says that a “referendum could constitute a turning point in Israeli history, leading to permanent borders, security, international acceptance, and internal solidarity.”

While the exact question has not yet been formulated, the group’s website suggests it will ask Israelis “whether Israel’s vision includes one state between the river and the sea or a two state solution.”

Any public reckoning around the occupation is a good thing, and Israel’s peace movement is by definition opposed to permanent rule over the Palestinians. But politics and morality suggest that this initiative is both risky and wrong.

It’s risky because it’s not clear that Israelis prefer a two-state solution over a continuation of the status quo. There is still an Israeli majority in favor of a two-state solution, but it’s not a very strong majority. A poll from last month found that 59% of Israelis support such a political arrangement, but only 46% support the type of two-state arrangement suggested by previous rounds of negotiations. And most troubling is an April 2016 poll that found that 72% of Israelis don’t believe that Israel’s control over the West Bank even constitutes an “occupation.”

And it’s risky because without precise wording at this juncture, Israelis are likely to associate the movement with unilateralism. Israelis are loath to consider unilateralism, something that has not served Israel well in Gaza. (That Israel has maintained, with Egypt’s help, a land, naval and air blockade around the Strip since 2007 complicates matters, mind you.)

It would be bad enough if it was merely risky. But Decision at 50 is also wrong. It’s wrong because the idea of a referendum on the fate of West Bank Palestinians suggests that this fate is Israelis’ to decide. Palestinians are under a military occupation — which was supposed to be temporary — run by a military directed by a government for whom these Palestinians don’t get to vote.

From my vantage point in Canada, I remember well the 1995 province-wide referendum on whether Quebec should separate from Canada. There, sovereigntists (those who wanted Quebec to separate) faced off against federalists (those who wanted to keep Canada intact) to decide the fate of the province. The “no” side won by a hair: 50.58% against separating, and Quebec has remained in Canada ever since. Scotland went through a similar process, as readers will recall, voting in 2014 to stay within the U.K.

The Quebec and Scotland referendum wagers were risky, too. Political fortunes hung in the balance, collective political and economic stakes were high, and in Quebec, there were issues of language and identity to consider. But the question was well within the moral and legal right of these political entities to deliberate. This was not a situation of one group of people deciding whether to grant — or continue to withhold — human rights to another.

In any event, if the Israeli referendum proceeds, the drafters should be careful to word the question carefully. The Scottish question was clear: “Should Scotland be an independent country?” But the Quebec question was decidedly not: “Do you agree that Quebec should become sovereign after having made a formal offer to Canada for a new economic and political partnership within the scope of the bill respecting the future of Quebec and of the agreement signed on June 12, 1995?” This tortuous phrasing led the Canadian government to pass the Clarity Act to ensure that voters in any future referenda understood what they were actually voting for, and empowering the Canadian parliament to determine whether a strong enough majority had spoken.

Sure, Decision at 50 is exciting for being the newest anti-occupation kid on the block. But in being so risky and so wrong, the founders might want to consider packing up and transferring their group’s social capital to other initiatives instead.