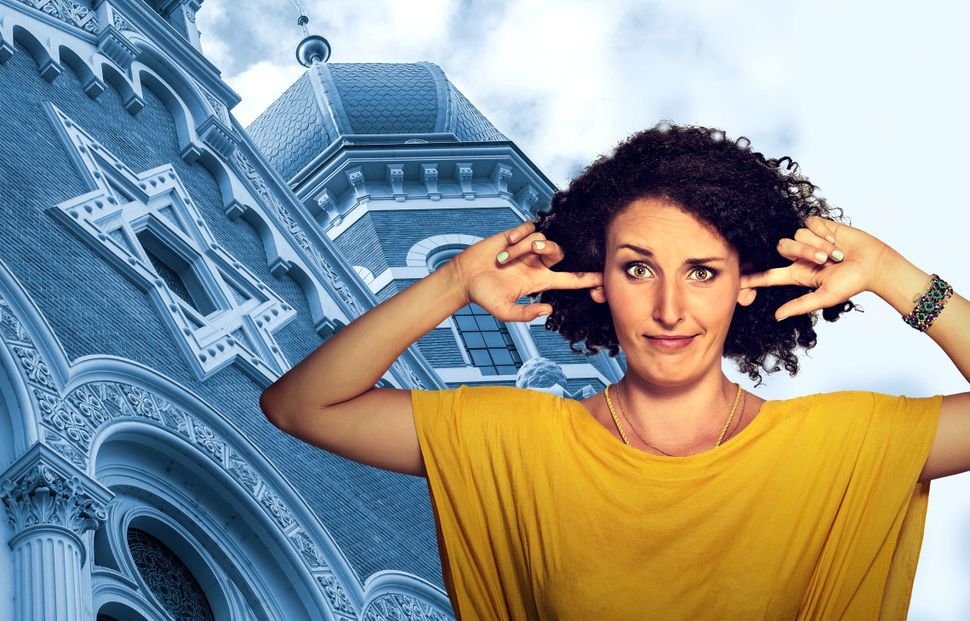 As the summer ends, Americans get back to business, and for American Jews, there’s no bigger business than the High Holidays at your local synagogue. I have some unconventional advice for you this year: Don’t go.

Instead of attending the kitschy mass performances that even your rabbi probably finds uninspiring, choose a different holiday from the Jewish calendar, one that you don’t currently observe, and commit to it instead. Sukkot is coming up soon, and most rabbis (including this one) love it. Or Tu B’Shvat in the winter. Or maybe Shabbat — it happens every week.

There are at least three reasons for you to avoid your local temple or synagogue this Rosh Hashanah. First, the holiday’s themes and liturgy focus on the least believable, most misunderstandable aspects of Jewish theology. Sure, introspection is great, and asking for forgiveness from friends and relatives can be extremely powerful. But the Man in the Sky with the big Book of Life? The Birthday of the World? Who are we kidding here? Does anyone believe this stuff?

And yet, here we are again, listening to authority figures drone on about them, standing up, sitting down, praying to a deity we don’t believe in. No wonder half of American Jews are leaving the fold — this fold sucks.

This is especially a problem for Conservative and Reform congregations, less so for Orthodox ones. But even the more, shall we say, reconstructionist versions of repentance reinforce the most problematic themes of Jewish tradition. Yes, an important part of being Jewish — religious or secular — is reflecting on your actions and trying to do better. For secular social justice Jews, that might mean increasing your commitment to activist work. For traditional religious Jews, it might mean keeping kosher — or, even better, “keeping yosher,” that is, holding oneself to a higher moral standard.

But these aren’t the only parts of being Jewish. Take the High Holidays out of context, and you’re left with a religion of finger-wagging. The guilt; the sins; the chest-beating; the fundraising; the memories of your grandmother, who only wanted you to marry Jewish. Oy!

In contrast, other holidays are refreshingly life-affirming. Sukkot is a holiday of harvest, joy, environmentalism, companionship, paganism, cyclicality, agriculture and community. Passover is a holiday of freedom, liberation, spring, nature, debate and making history new each year. The Sabbath is a time of rest, non-doing, mindfulness, holiness, community and family. None of these has much to do with guilt.

Whether gross or refined, the Days of Awe overemphasize one aspect of the Jewish experience — and a problematic one at that. Trade it in.

Second, Rosh Hashanah is a series of mixed messages. The day itself is confused, an amalgam of celebration and repentance, conviviality and sobriety. Are we supposed to celebrate the Birthday of the World or get busy with apologizing to God? Do we wish each other a happy new year or a serious, pious new year?

These mixed messages are amplified a hundredfold in most American contexts. One name for Yom Kippur, for example, is the Day of Death. Pious Jews deny themselves the vital activities of embodied life: food, sex, bathing. We are invited to exist in a liminal space, neither alive nor dead, and to do the hard work of looking inward.

That, and also to show off our new Italian suits, intone responsive readings and fill out pledge cards. The High Holidays, in many places, are the time to see and be seen — the Fashion Week of Jewish life. It’s a great time to gossip about other people in the congregation, for example. One big, happy family.

So which is it, a funeral or a quinceañera?

And then there’s the formality of the service, with far more monotone readings, honorifics, up-and-downs and rehearsed speech than any other time in the Jewish year. Believe me, your rabbis hate this, too — they’re just stuck with it. Even though they know that the formality makes no sense if what we’re supposed to do is either celebrate or introspect (or, somehow, both), the HiHos are big business. You don’t mess with them.

I’m exaggerating somewhat, but this isn’t just a problem of “bad shuls.” Even in the best of synagogues, these mixed messages make Rosh Hashanah a poor stand-in for the Jewish experience.

Finally, there’s the whole model of what Jewish life is supposed to be about.

Before the High Holidays, my rabbi and cantor friends spend weeks practicing every detail of the services, like b’nai mitzvah with receding hairlines. God forbid the sermon is too pro-Israel, or not pro-Israel enough, or too challenging, or not challenging enough. It’s like the congregation is an assembly of East German Olympic judges (I’m dating myself here) ready to be unimpressed.

Often, the High Holiday congregation is an audience, appreciating (or not) the cantor’s voice, bewildered by the Hebrew, alienated by the prayers. This is consumer Judaism at its worst: customers guilted into experiencing a mediocre product. It’s Judaism at its least interactive, least embodied, least kinesthetic, least engaging. It’s more show than service.

Rosh Hashanah is a disempowering feedback loop. Presenting a pageant for passive consumers, it creates more passive consumers. Dress nice, be infantilized and write a check — that’s the Judaism it presents.

And yet, while I am urging you to trade in Rosh Hashanah for a better, more empowering holiday, I wouldn’t want you to abandon it entirely. Because even amid the insincere sincerity and mass-market packaging, there’s still the Shofar, the epitome of Jewish magic and ritual.

Where the prayer liturgy is prolix and verbose, the Shofar is wordless. Where the theology of Rosh Hashanah is a mess, the primal call of the Shofar can be a shattering experience, packing thousands of years of history and pre-history into one, inchoate cry. Where Rosh Hashanah is often a day of infantilizing mediation, the Shofar is vivid and immediate. It calls to you, personally.

Of course, blowing the Shofar, too, can be a performance — I have been to many places where it is met by applause at the end. But at its best, the Shofar cuts through all that. The ancient magic of the ram’s horn is a reminder both of how much has been lost in terms of spiritual intensity and of how much is still available — if you want it and work for it yourself.

My advice? Get yourself a Shofar. Learn how to blow it. Listen to it and be inspired by it, interpreting its call as you wish. Share the experience with others.

Go to synagogue some other time.