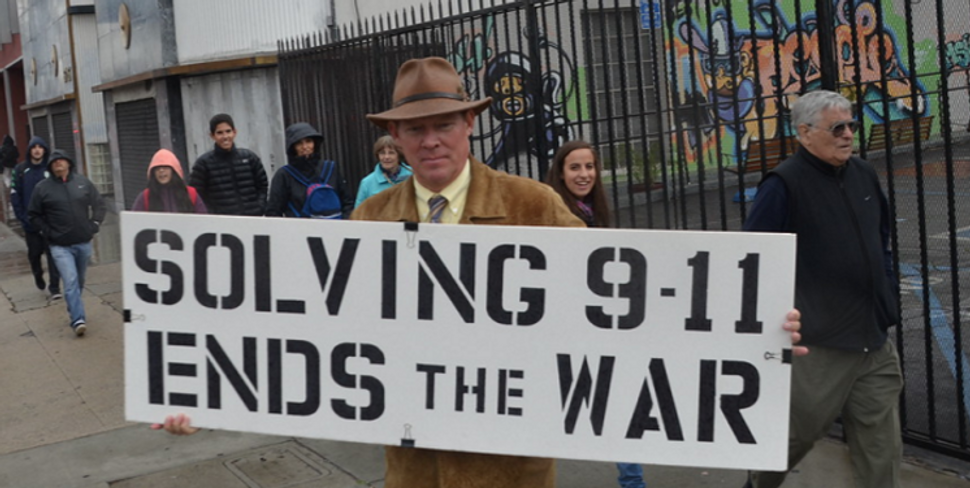 It’s not often that I get an opportunity to come face-to-face with one of the extremists whose activities, in my work as a research fellow at the Anti-Defamation League, I am charged with following and exposing.

But on Wednesday night it happened that one of the most ardent spokespeople for anti-Semitic 9/11 conspiracy theories was appearing in New York City, my hometown.

It was tempting to ignore that Christopher Bollyn was speaking locally. But I couldn’t pass up the opportunity to see him in person. As reprehensible and repulsive as I find him and his views, I felt I had to witness this anti-Semite firsthand.

Why? Certainly, I was curious. How does he rationalize his distorted views? What kind of audience would he attract? Would Jews, or perhaps others, be bold enough to show up and denounce him and his conspiratorial fictions?

So I went, paid the $10 price of admission, took a seat near the front and absorbed what was going on around me without revealing my professional affiliation to anyone in the room.

Bollyn is a particularly pernicious conspiracy theorist. Poised and clean-cut, he has a following and is one of the most ardent proponents of the notion that the 9/11 terrorist attacks were orchestrated by Israel and the Jews. His 2012 book, “Solving 9-11: The Deception that Changed the World,” suggests that the terrorist attacks were “a monstrous Jewish-Zionist crime of our time.”

Bollyn spoke (of all places!) at a progressive venue in Brooklyn — The Brooklyn Commons. And yet, despite a number of progressive groups — both Jewish and non-Jewish — protesting the event, The Commons allowed it to go on.

The first indication of the kind of people interested in the event came when I paid admission to a woman wearing a T-shirt with “Palestinian Human Rights” on one side and “#righttoboycott” on the other. I heard this woman and another woman by the door mention that Jews hear the word “Zionist” and think of anti-Semitism. I later heard the woman with the T-shirt disparage Jews after some protestors disrupted the event. She said, “Look at what the Palestinians have to put up with.”

I listened to the conversations around me. It was clear that many of the people present shared Bollyn’s views.

About two dozen people attended the event and they included pro-Palestinian sympathizers, 9/11 “truthers,” an assortment of lefties, and the curious. After 15 years of tracking and writing reports about the development of the Big Lie about 9/11, I had a good sense of what to expect. Bollyn is a longtime anti-Semite who promotes a number of anti-Semitic tropes — Jews control the media and the government — but focuses much of his work on the idea that Israel and the Jews were behind the 9/11 attacks.

Bollyn was late to start his presentation. Once he started, what ensued was a two-hour talk about how there is a vast conspiracy by Israel and Jews in the U.S. to carry out the 9/11 attacks as a false flag operation to create a war on terror that would give Israel, and presumably Jews, control over the Middle East. Bollyn showed slide after slide of prominent Jews — from Paul Wolfowitz to Larry Silverstein to Lew Eisenberg to Ronald Lauder — all of whom, he claimed, played a role in setting up the operation that led to 9/11.

But Bollyn did not stop there. He gave a history of Israeli politics, alleging that Israel’s goal since its founding was to smash the states around it to dominate the Middle East and control world events.

When Bollyn droned on with endless slides and information, a few people in the audience asked when he would stop and let people ask questions. One said he was experiencing information overload. Bollyn ignored them and went on to show more slides, this time trying to assert that commercial planes did not hit the World Trade Center towers.

Bollyn’s presentation was interrupted a few times by people shouting that he was an anti-Semite. Those people were escorted out, and later the police were called in to keep protestors from disrupting the event.

I overheard Bollyn tell a journalist that no one has been able to prove his anti-Semitism. It struck me that the fact that a person spends his time talking about a vast conspiracy of Israel and Jews to control the world and doesn’t think that’s anti-Semitic is a warped reflection of how acceptable anti-Semitism is in these circles. I keep thinking of the woman in the Palestinian rights shirt. Surely, Palestinians deserve human rights. But somehow it was okay here for Bollyn to blame Jews for conspiring to dominate the world.

What I find particularly disturbing is that a progressive venue would defend Bollyn’s presentation as a free speech event, claiming to be a place where all sorts of views can be presented. If a David Duke or a Ku Klux Klan member wanted to present their perspective, would they have been allowed to speak?

I guess my takeaway from this experience is that my work at ADL is more important than ever. Words do have an impact — and Bollyn’s words are dangerous.

Marilyn Mayo, a research fellow in ADL’s Center on Extremism, is an expert on right-wing extremists. She has written several reports on anti-Semitic 9/11 conspiracy theories.