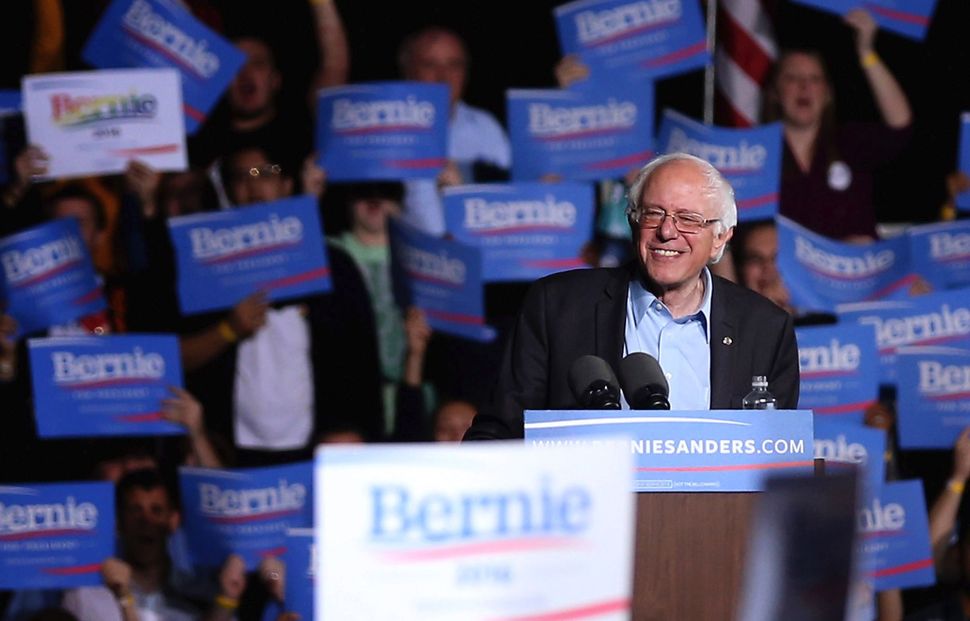 When a hacker leaked a trove of internal emails from the Democratic National Committee several months ago, one of them considered the condition of Bernie Sanders’s soul — and its potential as a wedge issue during the primary campaign against Hillary Clinton.

“Does he believe in a God,” asked Brad Marshall, the DNC’s chief financial officer, who identified himself as a Southern Baptist. “He had skated on saying he has a Jewish heritage. I think I read he is an atheist. This could make several points difference with my peeps.”

Marshall was taking a cheap shot, but not an inaccurate one. When the subject of Sanders’s Jewish identity had arisen during the presidential race, Sanders linked it almost entirely to having had relatives murdered in the Holocaust. As a young man, he spent a few months with Hashomer Hatzair, a secular, socialist Zionist movement.

And on the first day of Tishrei in 5776 — otherwise known as September 14, 2015, the first day of Rosh Hashanah — Sanders did not attend synagogue. He held several campaign rallies in Virginia. The closest he came to worship was visiting the mayor of Lynchburg, who happens to be Jewish, and though he got there too late for tashlich, the casting off of the previous year’s sins, he reportedly snagged some challah and wine.

Yet there was one other significant event for Sanders on that holy day, and it occasioned the most important speech on religion and politics that any candidate has delivered in this campaign.

Sanders spoke at the weekly convocation at Liberty University, an evangelical Christian school founded by the Rev. Jerry Falwell of Moral Majority infamy and now overseen by his Donald Trump-supporting son. It would be hard to envision a less sympathetic environment for a left-wing, non-believing Jew. (An Orthodox, pro-settler Jew would’ve been an easy fit among Liberty’s Christian Zionists.)

Thousands of students, however, gave Sanders a cheering welcome, and the Vermont senator, in turn, addressed them with respect both for their religious devotion and for the very obvious political differences between them and him — abortion, same-sex marriage, federal funding for Planned Parenthood.

As Sanders searched for common ground on economic issues, which took up the bulk of his speech, he did something entirely unexpected and enduringly consequential. He embraced the language of religion — Judaism, Catholicism, African-American Christianity, the New Testament gospels — to argue for liberal political positions and federal policies. Rather than premise his calls for morality and justice in secular ethics, as one might have anticipated, he went to Scripture. In doing so, he made a major step toward dressing a self-inflicted wound for progressives, Jewish or otherwise: abdicating the profound, value-laden, history-drenched rhetoric of faith to political conservatives.

“I am far, far from being a perfect human being,” Sanders said early in his 25-minute speech, “but I am motivated by a vision, which exists in all of the great religions, in Christianity, in Judaism, in Islam and Buddhism, and other religions.”

Let’s be clear here. Most of Sanders’s address at Liberty consisted of his standard stump speech about income inequality, his signature issue, and policy points such as universal health care and free tuition at public colleges. His dips into theology were relatively cursory.

For instance, his single reference to a New Testament text was Matthew 7:12 — that is, the Golden Rule: “So in everything, do to others what you would have them to do to you….” He cited the prophet Amos’s injunction to “Let justice roll on like a river, righteousness like a never-ending stream,” without even mentioning that it was one of Martin Luther King Jr.’s go-to texts, intoned in the “I Have a Dream” speech among many other orations. Sanders approvingly quoted Pope Francis’s attack on market capitalism with its admonition, “Money has to serve, not to rule.” From Sanders’s sound bite, you’d never know that Francis expounded on the basis of a large body of Catholic social teaching, including Pope Leo’s 1891 encyclical on the rights of workers, “Rerum Novarum.”

The superficiality of Sanders’s scriptural references was too bad, because at Liberty he had an audience that would have understood and appreciated greater depth.

Still, the overarching point of Sanders’s Rosh Hashanah sermon is that he delivered it. Without shame, without apology, without censure, he linked progressive politics to religious tradition. Yes, the Democratic convention and Clinton’s campaign have made much use of the Judaic concept of chesed and the Christian notion of agape, a love among people that is meant to mirror God’s love for humankind. But Clinton and her allies have beamed those messages primarily at her own base, which, while much of it is irreligious and uneasy with faith talk, certainly is not theologically and politically right wing. Sanders, in contrast, took his homily straight to believers, like an evangelist seeking well-intentioned but wayward souls.

Much of the coverage of Sanders’s speech at the time described the students’ reception as merely polite. To see it now on YouTube is to grasp how wrong those original reports were. Sanders received numerous bursts of applause, including after his endorsements of women’s rights and gay and lesbian rights. The C-SPAN video of the speech has been viewed more than 300,000 times, while the one posted by Live Satellite News has been seen by close to 350,000.

In a narrow way, such responses suggest a deep generational divide among evangelical Christians — an openness by the millennials to many elements of a social justice agenda that their elders ignore or denigrate. More broadly, Sanders showed the courage and dignity that Democratic liberals must summon now and in the future to engage with the faction of the American electorate we have foolishly allowed to own religion as a powerful force in the public square.

Samuel G. Freedman, a frequent contributor to the Forward, is the author of eight books, including “Jew vs. Jew: The Struggle for the Soul of American Jewry.”