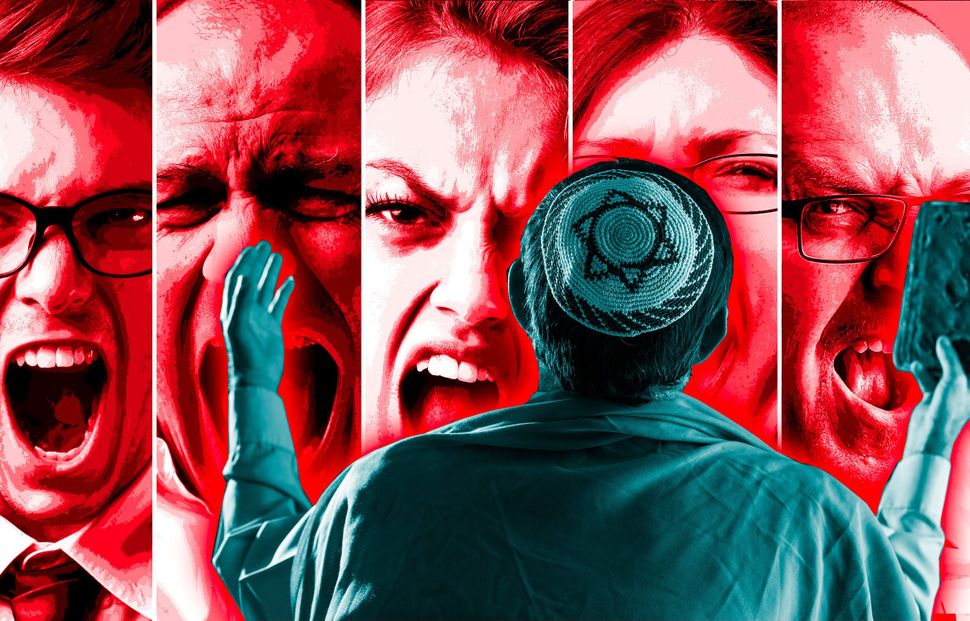 I’m a second-career rabbi, which means that before I worked in synagogues, I worked in secular businesses, restaurants and offices. There, I experienced and witnessed bullying and verbal abuse from managers and co-workers. But most of these incidents were reported to HR departments, and steps were taken to correct the problem and discipline the offender. There was always accountability when it came to bullying and abuse.

That’s why I was so surprised to learn just how little support there is for Jewish clergy who experience bullying or verbal abuse from their congregations.

In my (admittedly limited) tenure as a rabbi, I experienced a wide range of abuse from congregants. I was openly ridiculed at board meetings; I was demeaned and ignored when I challenged the status quo; I received countless verbally abusive emails from congregants; I was called names, and I was even threatened with physical violence.

At first, I did what most of our children do when they’re bullied at school: I reflected on my behavior and tried to correct what I was doing to see if that would change anything. When that didn’t work, I spoke out to the people who were doing the bullying and asked them to stop. When that didn’t work, I asked the higher-ups in my congregation to protect me. It was then that I realized how little value is attached to clergy in congregations. My board and my congregants told me that I was overreacting, that I was oversensitive, that I was too thin-skinned.

This is something we would never tell our children or students when they suffer abuse — and yet here it was.

I reached out to rabbis in the field and asked if what was happening to me was unique or if they had experienced something like it. The flood of responses was overwhelming. Countless rabbis, educators and cantors told their stories about being abused and bullied. They spoke of how their confidence was chipped away, their wills broken, their experiences at congregations ruined.

I received a great deal of empathy. But that’s all I received, because that’s all that my colleagues knew how to give me. I was told I needed to be strong, and to just “get through it.” I was referred to “consultants” who charge to bring congregants and rabbis together to mediate between two difficult parties. It seemed that everything I confessed somehow put me, the rabbi, at fault. Instead of being viewed as the victim, I was seen as the person who had somehow messed with the ecosystem of the synagogue and needed to take responsibility.

As it turns out, this is a pattern in our congregations. According to the results of a survey that I sent out myself (there had been no previous survey work) to rabbis, cantors and educators across denominational lines, 65% of rabbis have received verbal abuse or bullying more than once during their tenure; over 70% consider this abuse “severe” or “emotionally exhausting.” Most upsettingly, half of those who experienced abuse received no help from their synagogue leaders. The numbers for cantors and educators were similar. These are not small numbers.

This didn’t seem right to me. I grew up in, and dedicated my life to, the Reform Movement — a movement that breathes social justice, equality and peace. And yet, there wasn’t a single book, thesis or dissertation about how Jewish clergy could prepare for, respond to and recover from bullying and verbal abuse. Ironically, some rabbis referred me to the books our Christian friends had written on the subject. It seems that priest, pastor and reverend abuse is something of an epidemic, as chronicled in books like “Clergy Killers,” “Pastor Abusers: When Sheep Attack Their Shepherd,” “Healing for Pastor & People Following A Sheep Attack” and “Antagonists in the Church.” Where were our books? Where was our task force, our committee, our outrage that thousands of rabbis, cantors and educators were currently being abused and bullied?

Anecdotal evidence seems to suggest that the issue is a generational one. Previous generations of rabbis accepted abuse and bullying as part of the job. Despite the backlash Clint Eastwood received when he declared, “When I grew up, those things weren’t called racist,” our older generations of rabbis and leaders say the same about bullying; it was just part of being a rabbi back then. Of course, we know that just because something didn’t have a name back then, or wasn’t properly identified, does not mean that it is acceptable today. Racism isn’t acceptable today, nor should it have been when Eastwood grew up. Bullying isn’t acceptable today, nor should it have been when our mentors and older rabbis entered their synagogues.

Just as alcoholism and mental illness lurk in the shadows of the Jewish world because of the stigmas attached to these issues, and because of the claims that these problems do not exist among Jews, bullying and verbal abuse of our clergy are continuously disregarded. Our rabbis are told that they are whiners; that they are too young to understand what it means to be a rabbi; that there is no support available so we should simply seek therapy. “Jews don’t bully” is the new “Jews don’t drink.”

It’s time we stop ignoring the issue, stop blaming the victim, and start supporting those in our communities who have dedicated their lives to the Jewish people. We must shine a light on the issue, accept that it exists and create resources for our clergy, whether they are new in the field or have been serving for decades. When we teach our children, “Bullying is never okay,” we cannot add the implicit caveat, “unless you’re bullying a rabbi.”

Michael Harvey is the rabbi of The Hebrew Congregation of St. Thomas. Ordained in 2015, he earned a Master’s degree in Hebrew Letters from Hebrew Union College – Jewish Institute of Religion and a Bachelor’s degree in psychology from Boston University. Throughout his tenure at HUC-JIR, he served congregations in Arkansas, Missouri, Ohio, Alabama, Mississippi and Texas. Follow him on Twitter, @island_rabbi