Hillary Clinton Made a Huge Mistake at the Debate. I Say That as an Anti-Trump Republican. 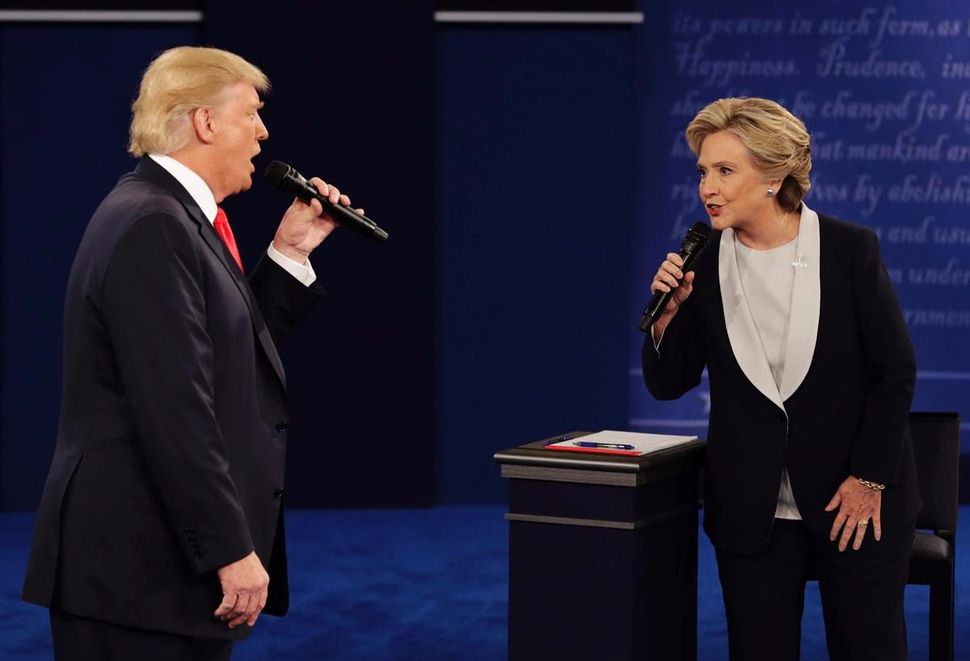 The second presidential debate was supposed to be a thrilling cage match between the two sides, framed by a half dozen of Bill Clinton’s accusers sitting in prime seats at the Washington University event. But from the moment Hillary Clinton walked on stage and made a point of refusing to shake Donald Trump’s hand, she blew her chance at changing Americans’ minds.

After the release of the Access Hollywood tapes in which Trump is heard bragging to host Billy Bush about sexually assaulting one of his married coworkers, Clinton’s campaign refused to release a statement, holding all its ammunition for what might have been the most-watched debate in American history (it was reportedly the most discussed on social media). Clinton, along with the media and entertainment wing, believed these tapes to be the slam-dunk that would end Trump’s candidacy. The lethargic manner in which Trump began the debate only seemed to strengthen that perspective. Clinton never went in for the kill, instead claiming to go high while her opponent went low. She probably reasoned like this: Why continually press Trump on his words and actions when it’s right out there in the media for all to see?

Unfortunately, as Republicans have learned too late, going in for the kill is what’s necessary to take down a candidate so intensely popular with his base that it sometimes resembles a cult. Clinton’s camp is making the same mistake Trump’s Republican opponents made in the primaries, letting the media handle the down-and-dirty attacks. Clinton’s failure to go on the offensive in defense of women everywhere turned this debate from a cage match into an uncomfortable but uneventful snoozefest.

As a Republican who has been vocally outspoken against Trump, and who constantly monitors the Republican conversation about Trump on Twitter and in my own social circles, it’s painfully obvious to me that neither the Access Hollywood tapes nor the second debate did a thing to move the needle for those who were already supporting him. I realize that this may come as a surprise to readers who don’t have Trump fans and voters in their social circles. But trust me when I say that the “it’s just locker room talk” line was an acceptable excuse for millions of Americans — yes, the very Americans who supported impeaching Bill Clinton for his sexual and moral failings.

These same Americans cheered when, after moderators pressed Trump for the third or fourth time, Trump went full-bore on the Clintons’ past history not only with sexual crimes and misdemeanors, but also with Hillary’s own gaslighting and slut-shaming of her husband’s past paramours and possible victims. It seems many Republicans’ motto is “Sexual misconduct for me, but not for thee.” What a way to run a campaign, especially as the party that prides itself on morality and family values.

Meanwhile, the same liberals who have spent the last 48 hours aghast at Trump’s comments from 2005 were the same folks likely rolling their eyes at Trump’s discussion of Bill and Hillary’s past affairs and misdeeds. There’s enough hypocrisy to go around.

What is clear after this year is that most Americans don’t have principles or ideals, but instead have chosen teams and have decided to stay in those corners no matter what. Many of the same conservatives who have (rightly) decried the lawlessness of the Obama administration are now posting approvingly about what they view to be Trump’s best zinger of the night, in which he tells Clinton that if he were in power, she “would be in jail.” He reiterated the promise in a more lengthy threat of indictment later in the evening. Even Trump supporter and former Bush White House Press Secretary Ari Fleischer sees the danger in such a statement, tweeting, “Winning candidates don’t threaten to put opponents in jail. Presidents don’t threaten prosecution of individuals. Trump is wrong on this.” Such a response isn’t surprising given how many threats of war crimes indictments members of the Bush administration have had to put up with since leaving office. But for consistency’s sake it would have been nice to hear, especially from the left, that threatening political opponents with prison is a threat to democracy, after many on their side spent a decade accusing President George W. Bush of war crimes.

After the second debate, America is back where it started, with each of the two sides camped in its corner and millions of the rest of us surveying our options with complete despair. During the debate I tweeted “Moshiach now,” a Chabad slogan that implores the messiah to come post-haste. This year has sent us modern-day plagues ranging from clown stalkings to the sex scandals of the 1990s revisited and relived. It seems the only thing that will save us from the insanity is Moshiach, and even then, I wish him or her good luck picking up the pieces.

Hillary Clinton Made a Huge Mistake at the Debate. I Say That as an Anti-Trump Republican.