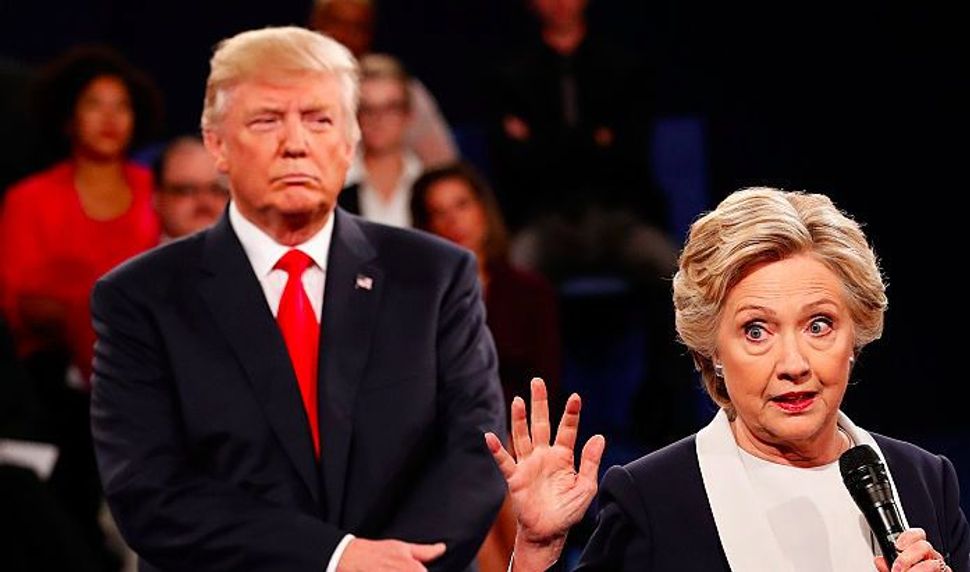 So this is what it’s like to be a woman running for President of the United States.

You share the stage in last night’s second debate with a man who just days before was heard joking on tape that he forced himself on women, kissed them without permission and described their bodies in vulgar terms, and he’s allowed to justify all this as mere “locker room talk.”

You are confronted with your husband’s past alleged infidelities as if it is a stain on your character — or, as the great Nick Kristof tweeted, “a serial adulterer who brags about his sexual assaults is needling a woman because her husband cheated on her.”

Your opponent repeatedly interrupts you, utters lie after bald-faced lie, stalks you around the stage, states outright that you have “tremendous hate” in your heart — and threatens to throw you in jail if he is elected president. And afterwards, some commentators actually say that because he didn’t completely screw up, he “won.”

This is, evidently, what it’s like to be a woman running for president in 2016, at least if you are Hillary Clinton and your opponent is Donald Trump. Perhaps some of you overlook the fact that she is the first woman in our history to be in such a position, or perhaps you have gotten used to it. I haven’t. I am both amazed that we have finally achieved this milestone in gender equality, and completely dismayed that the woman who gets to play this starring role has to face a misogynist like Trump.

Last night’s town hall event in St. Louis brought it all home for me — Trump’s boastful bombast versus Clinton’s steady answers; his meanness versus her empathy. In one of the more moving questions from the audience, a woman asked what the candidates would do about the humanitarian crisis in Aleppo, likening it to the Holocaust. I happen to think that President Obama’s reluctance to pursue a robust policy to stop the Syrian civil war is the greatest blot on his tenure; Clinton was secretary of state when the hostilities first began, and arguably could have done more to shape an effective response.

Still, her answer last night was solid and specific: She acknowledged that the situation is “catastrophic” and called for a no-fly zone to administer humanitarian aid. She also criticized Russia’s role in aiding the Assad regime and called for an investigation into possible war crimes.

And Trump? He blustered his way around the fact that he has effusively praised Russian leader Vladimir Putin, entirely misrepresented American nuclear capabilities and, when pressed by moderator Martha Raddatz, contradicted his own vice presidential running mate.

Imagine if a woman candidate did that, even once.

But this is also what happens when a woman is running for president: She brings up the causes of women and children, a lot.

In a question about the future of the Affordable Care Act, Clinton noted that the law abolished the long-standing practice of charging women more than men for insurance. In a question about the future of the Supreme Court, she said forthrightly that she would appoint judges who would uphold the reproductive rights guaranteed in Roe v. Wade. She talked about her record of obtaining health care for poor children and the disabled, and her advocacy for women’s rights when she traveled around the world as secretary of state.

It’s just about impossible to be the first and get it all right, and Clinton certainly has shown her flaws as a candidate during this long election campaign. Still, along with all the hardship that accompanies being a woman in what is still a man’s world comes the opportunity to talk about the issues that women like me really care about.

I hope we’ll hear more of that in the next few weeks. Trump’s statements and actions, his tapes and tweets and accusations, have portrayed women in the most awful, objectifying terms. We don’t deserve it, and neither does the country.