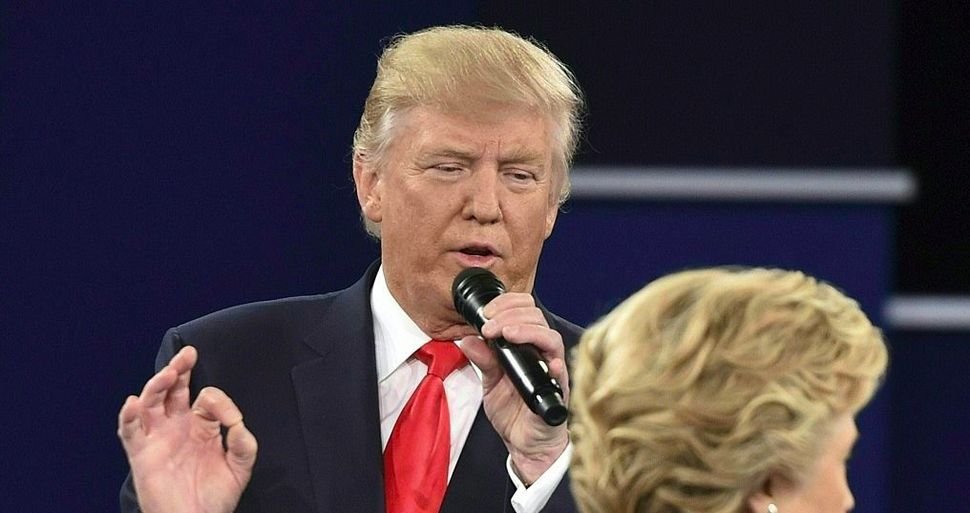 Donald Trump seemed to be physically stalking Hillary Clinton on stage at their debate at Washington University in St. Louis on Sunday night. He kept on sniffing into his microphone, grating the ears of viewers throughout the world.

He disregarded facts and ignored evidence, to put it mildly, which is to say he often lied through his teeth. And yet, in the warped political reality of the 2016 election campaign, at the end of the evening Trump had good reasons to go home feeling pleased with himself.

From the very first minute, after they refrained from shaking hands with each other, Trump came out swinging against Clinton. He was relentless. He horrified Clinton supporters, and disgusted professional pundits and politicians and may not have convinced even one undecided voter to come to his side. But he gave his core constituency of Clinton-haters and die-hard fans exactly what they wanted and even more.

Trump probably did well enough to stop the internal bleeding of his campaign in the wake of the Washington Post publication on Friday of the 2005 tape recording in which he makes abusive statements about women. He may also have slowed the momentum of Republicans publicly dissociating themselves from his candidacy. When the ship no longer seems to be sinking, the politicians are no longer in a hurry to run away.

Trump paid little attention to details, denying things he’d written and said — on the war in Iraq, for example, or tweeting about Miss Universe’s sex tape, for example — but at this point, his fans care less about facts and more about sticking it to Clinton, their most hated person in the world. As far as emotional satisfaction is concerned, Trump delivered the goods they wanted. He showed them that he still carried the same kind of wallop that decimated his rivals during the Republican primaries.

Clinton was less forceful than she had been in the first debate at Hofstra University two weeks ago. If we discount conspiracy theories, echoed in this week’s Saturday Night Live, by which the last thing that Clinton wants is for Trump to crash and burn and leave the race altogether, then the Democratic candidate probably decided to give Trump enough rope to hang himself in connection with the tape recording. By refraining from pinning Trump down and hammering him repeatedly on this issue, however, Clinton enabled her rival to explain what host Anderson Cooper accurately described as descriptions of sexual assault as mere “locker room talk” — and to then move aggressively from defense to offense and to slam Clinton incessantly.

Trump repeatedly called Clinton a liar, stressed the term “bad judgment” again and again and mocked Clinton for being “all talk.” Trump also made good on his deplorable pre-game gambit of trotting out four women who claim to have been sexually harassed and even raped by Bill Clinton by savaging his wife on stage for “attacking” the complainants against her husband. It was surely one of the most debased moments in the history of presidential politics, and probably didn’t do Trump much good among women voters, who didn’t like him much in the first place.

The debate will be remembered for a few memorable moments in which Trump made some of his characteristically outrageous statements. He openly threatened Clinton that if he became President he would appoint a special prosecutor who would investigate her crimes and put her in jail, a statement better suited to a Third World dictatorship than to American democracy. And when confronted with the position taken by his running mate Mike Pence about a possible U.S. military strike against Assad, Trump flatly said, “He and I haven’t spoken and I disagree.” It was an unusual expression of public disagreement between two candidates for national office and could be seen a rebuke by Trump for Pence’s criticism of his attitude towards women.

It was an unpleasant evening which was not salvaged by its final act in which both candidates were asked if they could mention one thing they admired about each other: Clinton praised Trump’s children while Trump did her better by acknowledging that Clinton never quits, which is one of her main campaign slogans and selling points. But the evening itself was marked by torrents of abuse that Trump heaped on Clinton, a tactic which, unfortunately, is considered to be successful.

The evening may have disappointed some of Clinton’s supporters, who had been yearning for a knockout blow that would have brought Trump to his knees. It means that the third debate, scheduled to take place in Las Vegas on October 19, could turn out to be just as important as the previous two. And also that there are still 29 days left before the craziest election campaign in history will finally be over.