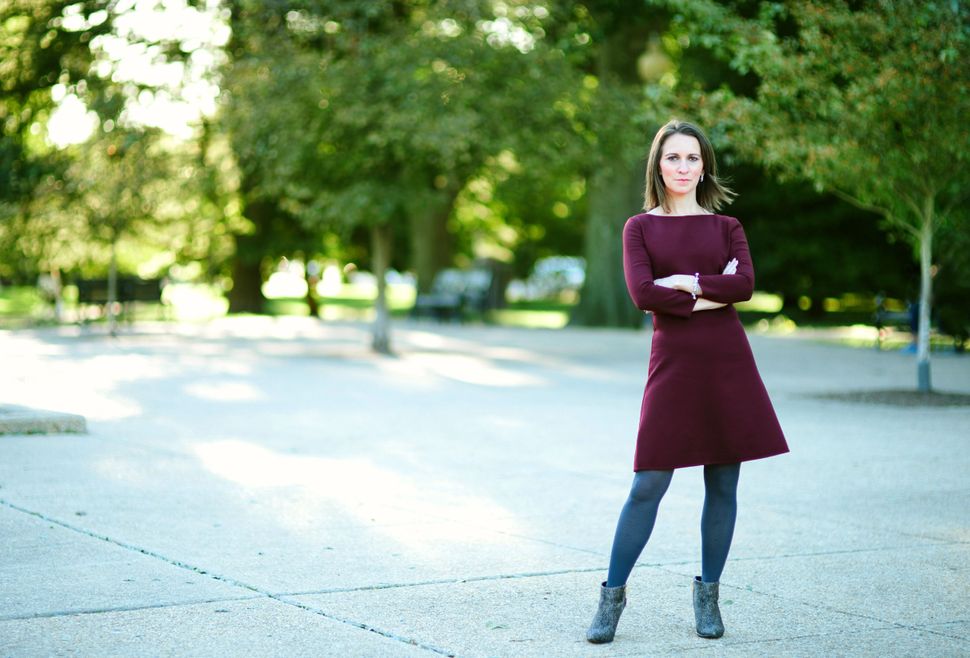 Image by Courtesy of Mindy Finn

As we’ve watched the rise of Donald Trump with abject horror over the past year, us “Never Trump” Republicans have stuck together because we’ve had to. We’ve helped each other withstand the onslaught of pressure to vote for what many Republicans perceive to be the lesser of two evils. One of the political friends I’ve become closer to this election cycle — because of our shared hard-line stance on the unacceptability of Trump — is Republican strategist Mindy Finn.

When I appeared on Megyn Kelly’s show the night after Trump’s much-anticipated interview with the host with whom he’d been embroiled in an extended feud, it was Finn who spent 45 minutes on the phone with me, preparing me for the appearance. She has the case against Trump cataloged in a mental Rolodex, especially when it comes to his problems with women, which was the focus of the segment. Those problems have only grown since I appeared on Kelly’s show, and Finn is now in an entirely different role, trying to provide conservative women with a path forward in this election cycle.

Last week it was announced that Finn would join a conservative independent presidential ticket led by former CIA agent and Republican House staffer Evan McMullin. The pair bill themselves as the conservative alternative to Trump: committed to traditional Republican principles like a strong national defense, free markets and respect for religious liberty and the sanctity of life. (Disclosure: It’s why I plan on writing on the pair.) For the many conservatives aghast at Trump’s policy positions and statements that are antithetical to what mainstream Republicans (were thought to) believe over the past half-century, the McMullin-Finn ticket provides a principled way to cast a ballot, even if the chance of the ticket garnering double-digit support is next to nothing outside of the mountain states.

McMullin’s campaign began in August, and his slogan is, “It’s never too late to do the right thing.” It was, however, too late to get on the ballot in every state. The pair has an unorthodox path to victory according to New York magazine:

ABC News pondered this subject for some time, and concluded that McMullin’s miracle plan is to win Utah and then deny both Hillary Clinton and Donald Trump the 270 electoral votes necessary to win in the Electoral College, and then prevail in the House as regular Republicans and presumably some Democrats lift the third-place EC winner to the top of the heap.

With the religious makeup of the McMullin/Finn ticket — a Mormon and a Jew, respectively — and the conservative constituency’s horror at both Trump and Clinton’s many moral failings, winning Utah and other socially conservative states could actually be possible. In a story for BuzzFeed, McKay Coppins outlined what he called a “remarkable conservative Mormon revolt taking place against Donald Trump.” He interviewed Utah’s lieutenant governor, who said: “I never believed the earlier stories about Trump losing Utah… Now, I’m honestly not sure. This feels different.” Coppins lays out a very plausible scenario in which the McMullin/Finn pair does actually win the heavily Mormon state.

In a phone interview for the Forward, Finn and I talked about Trump, the campaign and how Judaism factors into her candidacy.

Bethany Mandel: What was the moment you decided you couldn’t go along with a Trump candidacy? Has it cost you anything professionally, breaking with the Republican nominee?

Mindy Finn: I was in disbelief that he could actually be the nominee. I had grave concerns about his candidacy from the beginning. He was the chief Birther. He’s a celebrity; there was nothing in his record that indicated that he was fit for the highest office in the land. His crass and loose way to talk about immigration during his announcement speech, about Mexicans as rapists, raised alarms. When he denigrated Sen. John McCain’s war record because he was captured… veterans are sacred in our country. The fact that he would smear the record of a previous presidential nominee, and a POW war hero at that, was an abomination. And of course from there there’s been hundreds of other incidents that have confirmed the initial concerns.

My hope for the Republican Party for my entire professional career was that it would be a body that would represent everyone (race, religion, etc.) and conservative values. That’s what I fought for and worked for. Donald Trump took us many steps backward as a party.

Have you been a target of the “alt-right”?

To some extent. I hear horrible stories about what happens, but I haven’t borne the worst of it. In the early months of his candidacy, when I was on TV more and calling out his failings about his dangerous nature — not only unfit but also a danger to our country — I definitely had a lot of trolls and vile commentary thrown my way on social media.

Does he bear responsibility?

Absolutely he does. We’ve gone out of control with political correctness in our culture. People feel like they can’t share opinions in the public square that go against the grain. But Donald Trump goes beyond being anti-PC. He stokes distrust of entire national, racial and religious groups and has promoted violence at his rallies. He has demeaned and vilified entire racial groups and religions, and that is a recipe for violence.

How did joining the McMullin ticket come about? What were some of your concerns and considerations before saying yes?

I’ve been part of an anti-Trump fight for months, behind the scenes and in front of the camera. After the conventions I was feeling pretty discouraged. The pro-Trump forces seemed to overtake the principled-based conservatives. And I felt depressed about it, but on the other hand optimistic, because when you hit rock bottom it’s an opportunity to rebuild. 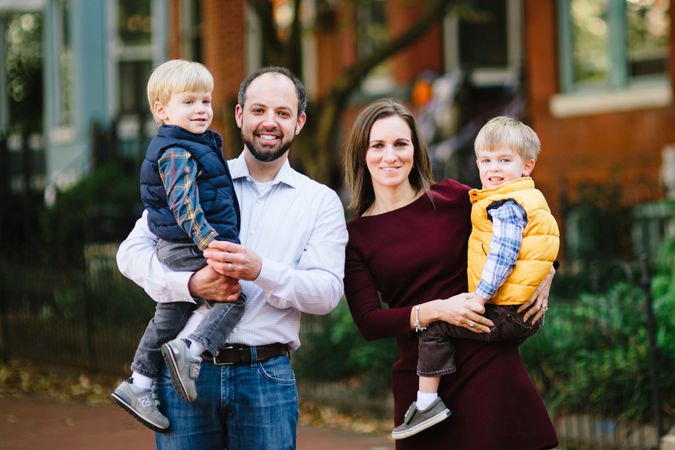 Mindy Finn with her husband David Feinberg and her sons Max and Nathan. Image by Courtesy of Mindy Finn

I was watching Evan’s campaign and was supportive in an innocuous way. I knew they wanted me to be more involved, but I didn’t at all expect this. I never expected to be a vice presidential candidate, this year or ever. After Evan asked me to consider it, and I got over my initial shock, I understood the unconventional nature of this campaign, and it made total sense. We are going to take this energy and build a new conservative movement. We want to ensure that voters have an option they can be proud of and to be a voice for those voters.

I couldn’t think too much about doubts, concerns or fears. It really seemed like there was more upside than downside. You can’t do wrong standing on principle. I’m someone who advocates for people to work in public service and this was my chance to walk the walk. The biggest concern was that it would open my family and me up to increased scrutiny and people saying nasty and negative things about them. I didn’t want to put them through that. But I countered that by saying how proud I would feel to tell my children that this is what I did.

What does your being Jewish bring to this ticket?

I think the most important role that our religions each play (McMullin is Mormon) is that we deeply value religious freedom. Neither candidate on the stage at the debate Sunday night stood for religious freedom for all people (Christians, Muslims, Jews, etc.). When you don’t protect the religious freedoms of one group, you don’t stand for it at all.

Bethany Mandel writes on politics and culture, usually from a conservative perspective. Follow her on Twitter, @BethanyShondark