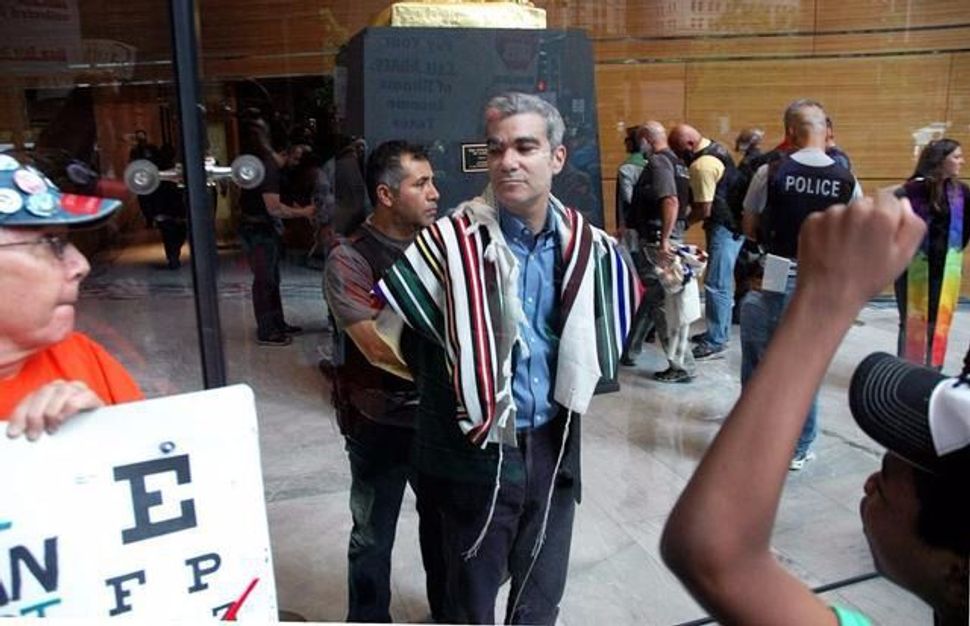 As Tzedek Chicago’s rabbinical intern, I was interested in Mira Sucharov’s recent Forward opinion piece, “My Problem With the Idea of a “Non-Zionist” Synagogue,” which explores how the issue of Israel impacts congregational life. It’s an important subject, and Sucharov raises some important questions that American Jewry should address. I was disappointed that her article contained several critical misconceptions about Tzedek Chicago, which was created by Rabbi Brant Rosen. I’d like to clarify a few points and respond to some thoughtful critique.

Sucharov writes that Tzedek “bills itself as non-Zionist.” We are a values-based community, and our core values include “a Judaism beyond nationalism.” But we are not a one-issue congregation, and we don’t refer to ourselves as such. Had Sucharov done more research beyond a “perusal of the website,” she would have discovered that Tzedek and its members are active in many progressive issues, from immigration justice to #BlackLivesMatter to fighting Islamophobia to #StandWithStandingRock. Our second day Rosh Hashanah service was a prayerful solidarity action with the Chicago Teachers Union in Chicago’s City Hall.

We uphold non-Zionism as part of our core values. We understand non-Zionism to mean not Zionism. The adage “two Jews, three opinions” applies just as well to Tzedek as it does to any other congregation. Had Sucharov interviewed any of us, she would have learned that we do not have “redlines in reverse”; among us, there are a-Zionists, those indifferent; post-Zionists; anti-Zionists; those unsure of their position regarding Zionism, and even a few political Zionists who appreciate our anti-Occupation activism. We impose no litmus test for membership.

Non-Zionism relates to multiple core values of ours. We take an anti-oppressive, anti-racist, anti-militarized, anti-Islamophobic worldview. We connect detention of Palestinian children with the school-to-prison pipeline in America. Our commitment to justice for Palestinians means our coalition partners don’t wonder when we will abandon them because they support Palestine. Our non-Zionism is motivated by an intersectional understanding. As a values-based congregation, we don’t focus on ensuring every person would feel comfortable in our community. Rather, we focus on creating community with those who share our values.

Though liberal mainstream synagogues share many of our other values, almost none of them make room for non-Zionist Jewish voices. Our commitment to ending the Occupation does not, as Sucharov writes, make us “anything but” non-Zionist. We are not “hiving off” from these congregations; we have been rejected by them. We are not “avoiding Jewish communal spaces” — we created one.

Sucharov wants us to “push for the kinds of tough conversations we should be having with those who disagree.” This attitude is sadly reminiscent of those who put the onus on the marginalized to make needed change — for example, by saying that it is the responsibility of people of color to insist white Americans dismantle racism, or that LGBTQ people must push cisgender straight people to have “tough conversations.”

It is not their responsibility to push for tough conversations. There is no shame in them “hiving off” to create safe spaces where they are free to be themselves without confronting a privilege-oppression dynamic. Similarly, we seek a congregation where we can proudly celebrate our Jewish values instead of spaces where, at best, we are tolerated as long as we don’t disturb the status quo or, at worst, we are tagged as anti-Semites or self-hating Jews.

As a transgender man, I seek safe spaces among other transfolk. We don’t ask if cisgender people would feel welcome in those spaces. Similarly, Zionists have many Jewish spaces to call home. Tzedek need not cater to their concerns. There’s a world of difference between a silo and a safe space.

Mentioning a substantive objection to Tzedek’s approach, Sucharov writes: “We need to reinvigorate pointed debate about Israel — and Zionism — across the Jewish communal divide. Justice might just depend on it.”

We disagree. Mainstream American Jewish institutions created a Jewish communal divide over Zionism. These institutions marginalize the increasing numbers of Jews, especially young Jews like me, who view Israel as an oppressor nation. To blame the marginalized for the divide is to miss the power dynamics at play. Until we disentangle Zionism from American Jewish institutions, this divide can never truly be crossed. At Tzedek Chicago, we feel blessed to provide space for these passionate, thoughtful Jews who are ostracized in other communities.

As ever, justice does not depend on “pointed debate.” It depends on those who confront systems of oppression and demand change.

Jay M. Stanton is a rabbinical student at the Academy for Jewish Religion in New York and rabbinical intern at Tzedek Chicago.