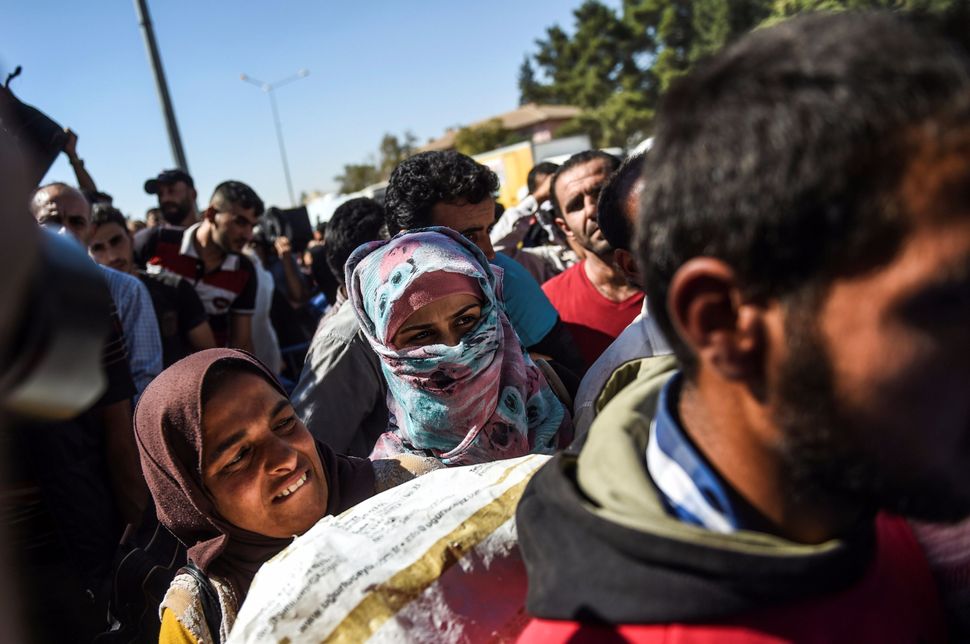 *This piece is part of a series about the issues in the 2016 presidential election.**

With the number of people killed in Syria climbing toward 500,000, almost 5 million people have left their homes in search of safety. Under the Obama administration, the U.S. has accepted 10,000 Syrian refugees. Hillary Clinton has said she would raise the number to 65,000. Donald Trump, however, wants to stop accepting Syrian refugees altogether.

He threatened that if he’s elected, he would deport the Syrian refugees we’ve already accepted. Trump claims that these measures are necessary to protect our safety. But these policies do not reflect America at its greatest. They reflect America at its most pathological — acting on irrational fears and turning against those who most need our help.

Trump argues that his policies are necessary protection from the “tremendous flow” of refugees who “pour into our country” and who are, in many cases, “ISIS aligned.” And, he warns, we have “no system to vet them.”

Well, that does sound ominous. But it’s not an accurate description of the challenges. Unlike the situation in Europe, refugees are not “pouring” into the U.S. They aren’t swimming across the Atlantic Ocean and landing on our shores. They apply through the United Nations High Commissioner for Refugees once they’ve left Syria and made it to a nearby country. And they wait there, sometimes up to two years, to be processed. During that time, at least three U.S. security agencies aggressively and repeatedly screen candidates.

Out of the millions of refugees, we accept only a few thousand of the most vulnerable refugees. Almost 60% of the Syrian refugees we’ve taken in are children. Single male refugees of fighting age, the Syrians many Americans are most afraid of, make up only 2% of those we’ve taken in. And they are victims of ISIS, not supporters.

Rafat, a 22-year-old Syrian student I met in Greece, reflected, “If people are afraid of us, it’s not their fault, because they’ve never met us. We’re not ISIS, just normal [people] searching for a home.”

Is there some element of risk? Yes. Life is full of risk. When we cross the street, or commit to a romantic partner, we take a risk. America is at its best when we evaluate our fears against the facts. We should never simply dismiss our fears. Nor should we ignore real threats. But we must find the emotional and mental strength to evaluate them without succumbing to irrational fear.

Batya Septimus is the co-creator of The Refugees: A Story Project, an online space where refugees share their stories, hope, and fears. You can read and listen to these stories at www.refugeesite.com.