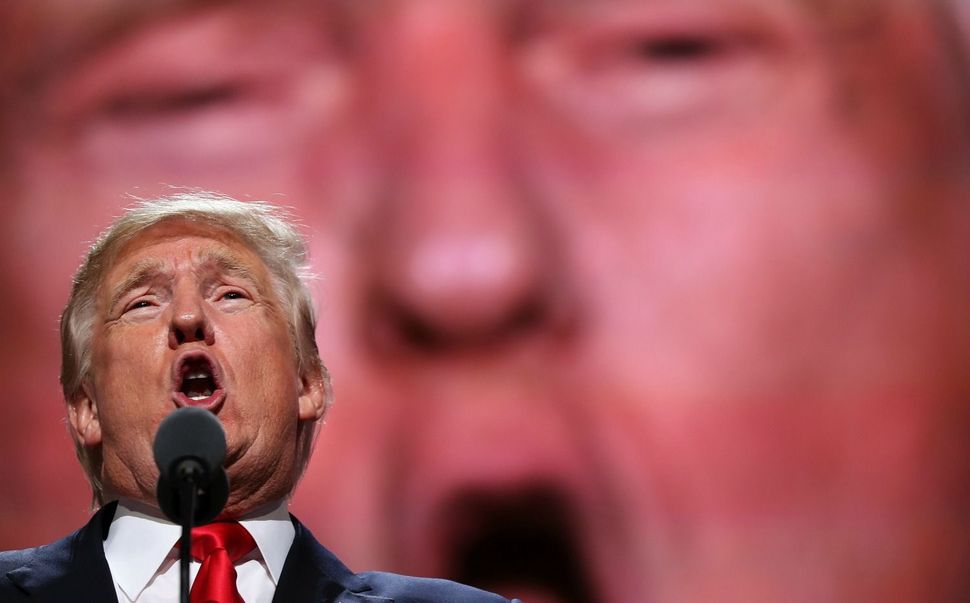 You could say a lot of things about this year’s presidential election campaign, but there’s one word that keeps popping up over and over: unprecedented. And that’s just the right word. This is unprecedented. We’ve never seen anything like it.

Never before have the two major candidates been so widely disliked by voters. Never, at least since the Civil War, has the American public been so bitterly divided, nor a presidential election campaign been conducted in such coarse, degrading, inappropriate tones.

Let’s be frank: There’s plenty of blame to go around on all sides, and neither candidate is close to ideal. But the debased tone of this campaign is mostly the handiwork of one man: Donald Trump.

When we speak of an unprecedented election year, we’re really talking about Trump. This nation has never seen a major-party presidential nominee who was so profoundly ignorant of the nature, scope and limits of the job, of the workings of government and the content of the Constitution. So uncomprehending of the dangerously volatile complexities of international relations, of military power and its uses, of deterrence, of weaponry, treaties and international law. So unaware of his own limitations, so incurious about the things he doesn’t know.

Above all, we’ve never seen a competitive candidate for the highest office in the land who was so emotionally unstable, so quick to dole out outrageous insults and yet so quick to take offense, so incapable of taking what he’s dished out. So thin-skinned and narcissistic that he’s perpetually threatening to use organs of the state to take revenge on those who’ve hurt his feelings. So incapable of separating his own needs from those of the nation that he can actually express confidence in his ability to repair relations with Russia because “Putin has said nice things about me.”

We’ve known all along that he represented something new and frightening in American politics. You didn’t have to be a Democrat to find him alarming. The Trump phenomenon has split the Republican Party, to the point where many question the very future of the GOP. A new movement, Never Trump, has emerged from the ranks of sane conservatives with the sole purpose of repudiating the candidate. We’ve seen and heard the alarms sounded by journalists like William Kristol, Jennifer Rubin, George Will and Charles Krauthammer, by elected officials like Paul Ryan and Jeff Flake, by the entire Republican royal family, the Bushes.

All the more disappointing, then, that the Democrats and their standard-bearer, Hillary Clinton, have devoted so much of their campaign to attacking the conservative principles Trump shares with the Republican mainstream, rather than hammering home the ways in which he is not like other Republicans but is rather a malignant mutation. Pursuing business as usual, flogging the liberal cookie-cutter issues that please the Democratic base but unite Republicans in opposition to them.

Until the last month or so — until the Access Hollywood video was released on October 7 — the Democrats were practicing business as usual rather than responding to the national emergency that Trump represents. In building a campaign around opposition to Republican policies — on immigration, abortion, racial justice, gun laws — they were effectively reminding anti-Trump Republicans of all the reasons they didn’t like Democrats. They were shoring up Trump’s base rather than shrinking it and expanding their own.

This unprecedented election year could have been a rare opportunity to attack one of the most urgent crises in Washington, the polarization and gridlock that embitters all sides and paralyzes government. Rather than — or in addition to — using the Trump phenomenon as an opportunity to push back the Republicans, Clinton could have called for bipartisan unity in the face of an unprecedented threat to America and American democracy. She could have called on Republicans to join her in a sort of government of national unity, with serious Republican representation in her Cabinet and an agenda topped by resetting the tone in Washington.

It’s not too late. In the few days remaining before the election, Clinton could issue a declaration of national emergency, a call for unity and an agenda for the next two years including creating task forces, identifying areas of possible common ground, or at least compromise, and trying to define new ground rules that might promote civility in public affairs.

Thoughtful liberals argue, with considerable justification, that the Trump phenomenon didn’t appear out of nowhere. They say Trumpism emerged from a ground prepared by the culture of contemporary Republicanism, with its anti-government, anti-science, anti-intellectual extremism, its free-market fundamentalism and fierce hatred of everything liberal.

In recent weeks, as I’ve argued for outreach to Republicans from an incoming Clinton administration, readers and friends have countered that compromise, especially as a first choice rather than a fallback, would amount to rewarding the right for its years of bad behavior. I’ve been told repeatedly that a Democratic administration should immediately use its mandate and grace period to begin fixing the societal ills that give rise to frustration and extremism, beginning with discrimination and economic inequality.

In an ideal liberal world, no one could argue with that. But we live in a country that’s divided in two, and each half seems to think it can somehow make the other half disappear — progressives no less than conservatives. Certainly progressives should continue to strive for a higher minimum wage and a woman’s right to choose, just as conservatives will continue to fight for lowering taxes and restricting abortion rights. Disagreement is what makes democracy work. But absolutism, the belief that my truths are indivisible and yours are illegitimate — these are the polarizing impulses that lead to political paralysis and ultimately to Trumpist nihilism.

An electoral margin of 51% or 52% is a victory and entitles one to the reins of office. But it’s not a mandate for sweeping change. Seeking common ground is not a recipe for surrender — it’s the beginning of healing.