Your Ambivalence Toward Hillary Clinton Says More About You Than Her 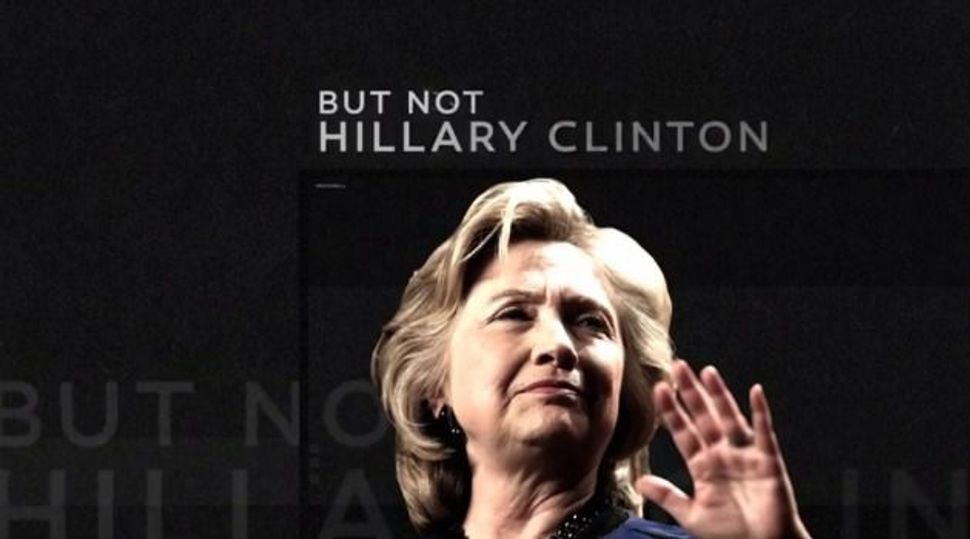 I don’t mean to Team Bernie or, God forbid, Team Trump. I mean that it’s time to take a good hard look at the reasons many of us are still on Team Reluctant, Team Lesser of Two Evils, or Team This Has Been a Nasty Election All Around.

If you do, I think many of you will switch, as I did a few months ago, to team Hell Yes I’m With Her. Because this is an election between an excellent candidate and an abhorrent one. It’s a test of all our values. Moreover, this is the most critical election for American Jews since World War II.

We all know, or should know, the case against Trump. He has normalized racism, misogyny, xenophobia, boorishness and anti-Semitism like no other candidate in recent memory. He is actively supported by Vladimir Putin, whose agents have hacked American email accounts, planted fake identities to boost Trump online, and (at times) paid one of Trump’s former campaign managers. He is unstable, ignorant, mean, trigger-fingered, vain, demagogic and insecure. He has campaigned on fear, innuendo, anger and a yearning for authoritarianism. His populist protectionism would take us backward, his isolationism would be tragic for Israel and other allies, and his economic policies (repealing the estate tax, lowering the top bracket from 35% to 15%) would be the most regressive in American history, costing 4 million American jobs and hurting his own supporters the most.

And he has lied about his assaults against women, his non-payment of income taxes, his (nonexistent) plan to defeat the Islamic State group, his position on the Iraq War, his net worth, his debts, his fraudulent university, his views on abortion, his “charitable” foundation, his memories of Muslims cheering 9/11, his bribe of a Florida attorney general, and his opponent. He is — by the numbers, not by opinion — the most dishonest person in politics today.

But enough about Trump.

The fact is, most Clinton supporters aren’t too thrilled with her either. Yet this is where it gets interesting. Pressed to explain, reluctant voters generally say either that she isn’t progressive enough or that she isn’t honest enough.

On the first count, Clinton is, indeed, less progressive than Bernie Sanders. She is a liberal Democrat, and he is a Democratic Socialist. If your views are more in line with the latter, it’s fair to be lukewarm about electing someone who is indeed part of the American mainstream — even if it is your moral and civic duty to save us from Trump.

But let’s talk about the second count. What is the evidence that Clinton is dishonest? The email “scandal”? She followed Colin Powell’s advice, did what dozens of other officials did, and has admitted a mistake. The new “revelations,” as J.J. Goldberg recently discussed in these pages, are a big fat nothingburger on a right-wing propaganda bun. Indeed, the same Republican FBI director who threw the ninth-inning curveball last week has said that no prosecutor would press charges.

So what, then? Benghazi, for which she has been cleared in three separate investigations, again led by hostile Republicans? Do you really think they’d have left anything on the table that they could have used against her? The Clinton Foundation, which, sure, served the Clintons’ desire to remain players on the international stage, but which also managed to raise and disburse tens of millions of dollars to fight disease around the world?

Back in the 1990s, there was a phenomenon known as “Clinton Fatigue.” Travelgate, Whitewater — it seemed like an exhausting litany of one scandal after another. Yet if you look closely, nothing was ever discovered, except Bill Clinton’s sleazy affair (and lying about it afterward). Whose fault is all that fatigue, then?

As Susan Faludi astutely discussed in the New York Times, there’s been conservative resentment against the Clintons for 35 years — and hundreds of millions of dollars to amplify it. The fatigue, the ambivalence, the reluctance that I myself felt was, in fact, the product of right-wing political activism. When I looked, personally, at the substance of my reluctance, all I could see was right-wing innuendo.

And, of course, sexism. Many men don’t trust Clinton because they don’t like how she talks, or how she acts, or how she inadequately appears masculinely presidential and femininely feminine at the same time. True, she is not a born politician; she’s no Bill. But we give men all kinds of passes we decline to extend to her.

In fact, what I found, when I looked closer into my own doubts about Clinton’s trustworthiness, reminded me of a painting by Georges Seurat: an aggregate image that was really made up of a thousand little dots. But unlike a Seurat painting, each of these dots was meaningless. The aggregate was an illusion.

So, when people say, “I don’t trust either of ’em,” I wonder what’s underneath that mistrust. On the Trump side, there’s a whole lot of evidence. On the Clinton side — what, exactly? Mostly smoke and mirrors.

Of course, in today’s segmented media landscape, liberals and conservatives consume entirely different narratives. If you watch Fox News all the time, asking “What’s so dishonest about Hillary Clinton?” is like asking what’s wet about the sea.

But that just raises the stakes. Without exaggeration, this is a choice between truth and lies, between substance and a con. This hasn’t been a nasty election all around — this has been an election with one singularly nasty candidate in it, someone who has debased our political discourse in unimaginable ways. There’s not enough blame to go around; the blame lies with Republican voters, for electing and supporting this demagogue.

And what about us Jews? The American Jewish situation has not been this precarious in half a century. We are endangered by the way the Trump campaign has legitimized bigotry in general, and how it has appallingly failed to condemn anti-Semitism in particular.

But even more so, we are imperiled by the failure to distinguish truth from lies. We Jews are a tiny minority. The lie about us is that we’re exceedingly powerful, controlling the media, the government and the banks. If we give up on truth — verified truth, truth with evidence behind it, rather than just innuendo that “everyone knows” — we have nothing with which to fight those who hate us.

Let’s look closely at why so many of us are so ambivalent about the most qualified presidential candidate in history, an imperfect human being who has dedicated her life to progressive causes. If we let the rumors about Hillary Clinton go unchallenged, the rumors about us will be next.

Your Ambivalence Toward Hillary Clinton Says More About You Than Her