Hey, Curt Schilling, Let Me Tell You About American Jews 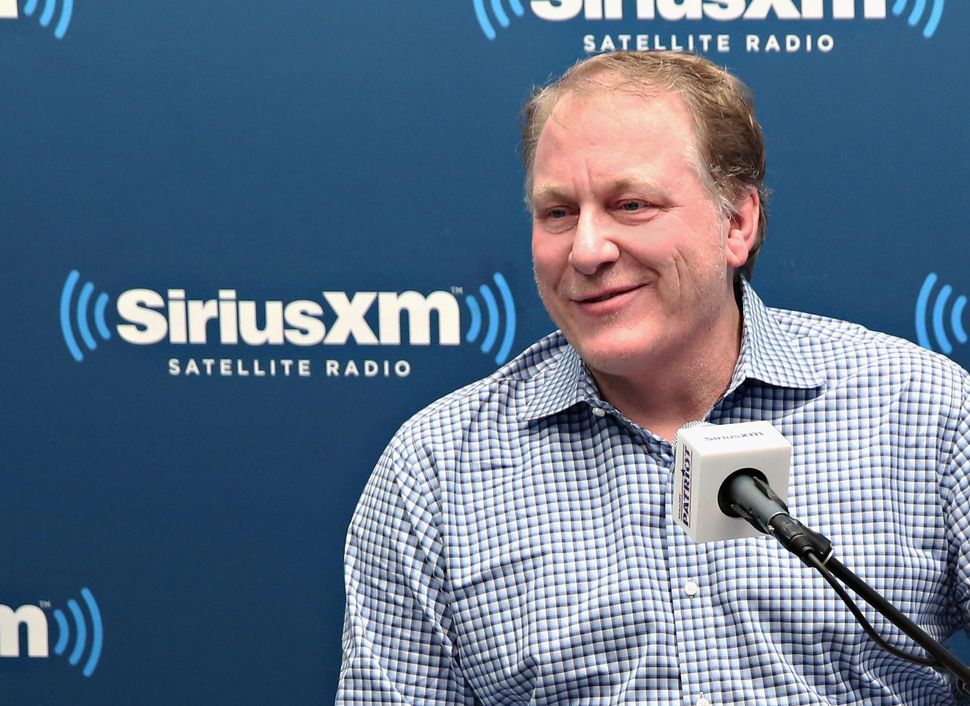 He’s Got a Mike: Curt Schilling wondered why Jews support the Democrats when they are “so clearly anti-Israel.” Image by Getty Images

Tapper duly pointed out that “I don’t speak for Jews,” but hypothesized that Jews vote for Democrats more because of their “support for social welfare programs,” rather than Israel.

Immediately, I called my friends who do speak for the Jews. But they were busy; High Holidays, building the sukkah and, of course, bigger fish to fry than you. Alas, the task has fallen to me. So, Mr. Schilling, here are six reasons why American Jews, by a two-to-one ratio, support Democrats over Republicans:

1. Comments like yours. Dude, that was creepy! Is Jake Tapper the first Jew you’ve ever met? Are you trying to put him on the spot, or maybe “out” him as Jewish? Or maybe (and I can’t help but think this is the real reason) subtly point out that some (many?) journalists are Jewish? Your question was like the televised equivalent of (((echoes))). And from Henry Ford in the 1920s to the white-shoe anti-Semitism of the 1950s to the coddling of the alt-right in the 2010s, most Jews recognize that anti-Semitism and flag-waving, nativist conservatism like yours go hand in hand. For about 30 years there, some neo-cons could delude themselves otherwise, but your man Trump has changed that. The fact that you don’t even see how inappropriate, offensive and weird you were is, of course, part of the point.

2. We are loyal Americans. Like other groups (including German Americans), American Jews don’t vote solely on the basis of our own group’s interests. True, some of us are “Israel First” voters. But many more, the data says, are not. Like other Americans, we want what’s best for our country. Suggesting that we don’t, that we Jews should vote on the basis of what’s best for Israel, is — once again — to invoke the specter of anti-Semitic allegations of disloyalty. Now, I’m not accusing you of anti-Semitism. I’m suggesting that you’re swimming in such an anti-Semitic sea over there on the far right that you aren’t even aware of when something sounds bigoted.

3. Democrats are better for Israel — especially this year! Donald Trump would destabilize the Middle East, trash alliances that Israel depends on, cripple America’s partnerships with Muslim allies and return our country to an “America First” isolationism that, as one Orthodox rabbi recently told me, has proven disastrous for Jews. Presumably that’s why Israelis overwhelmingly support Clinton over Trump. But it’s true in other years too. Support for Israel’s hard right is bad for Israel. Friends don’t let friends turn their government over to messianic nationalists with no plan for peace and normalcy. Democrats have been staunch allies of Israel for decades. Republicans are indebted to fanatical Christian Zionists who want to hasten the coming of the apocalypse.

4. We remember oppression. My favorite Biblical quotation, as Forward readers may know, occurs several times, including Exodus 22:21-22: “You shall not oppress or mistreat a stranger, for you were strangers in Egypt. Do not afflict the widow or the orphan.” The majority of American Jews remember that we were “strangers in Egypt” right here in America, as well as in Germany and the rest of Europe. As my Twitter feed reminds me every day, many of our fellow citizens do not regard us as fully American, or even fully human. And we get that oppression of Jews is not unlike oppression of African Americans, immigrants, Muslims, Latinos, women, Asian Americans, LGBT people and anyone else. Different, but related. That’s why American Jews overwhelmingly (though not unanimously) allied with blacks against conservatives in the 1960s, with LGBTs against conservatives in the 2000s, and with Latinos, women and others against conservatives today. Once again, not all of us. But most of us. And it’s why it creeps us out when people speak in broad generalizations about “the Mexicans” or “the Muslims” (yes, even though Jews and Muslims are fighting each other in Israel): because they used to speak that way about us. And still do.

5. We’re new immigrants. In addition to being a historically oppressed group, American Jews are mostly only two or three generations removed from the immigrant experience. We’re outsiders here in America, even when we’re on the inside. (Your comments to Tapper reinforced that.) We root for the little guy, the underdog, the underprivileged. This is what Tapper meant, I think, when he talked about “social welfare programs.” My grandparents came here with nothing and worked their way up, American Dream style — with the help of their community, family and basic government assurances that they wouldn’t have to go it alone if times got really rough. Sure, we could learn the opposite lesson: that we worked hard for ours, now it’s time for “them” to work for theirs. But that’s a mean, nasty lesson to take away. How about putting yourself in the shoes of the other guy? I have sympathy for gun owners, business owners and farmers. I listen to them, read about them. So how about sympathy for transgender people, Native Americans, the working poor and folks dealing with mass incarceration, police violence and systemic racism? Maybe having been on the wrong side of the establishment has helped some of us to listen better.

6. It’s part of American Jewish culture. Some of our leading sociologists and political scientists, including Steven M. Cohen and Sam Abrams, would disagree with much of what I’ve said so far, arguing that actually, American Jews vote Democrat because that’s what we’ve always done. The Yiddish joke ran Alte Velt, Neue Velt, Roosevelt — the Old World, the New World, and Roosevelt, the three pillars of American Jewish life. Well, fair enough. But there’s a reason why these cultural norms persist: because, in general, Democrats are messier, more ethnic, less prejudiced, less biased toward the country club set, less establishment. It’s part of our identity because the Democratic Party looks and feels like us — not Jewish, specifically, but not part of the old establishment money that wants to return us to some earlier time when they controlled more and everyone else had less.

I hope that helped, Mr. Schilling. Any other questions about what Jews think or why they do what they do, just let me know.

Hey, Curt Schilling, Let Me Tell You About American Jews