Who Are the Donald Trumps in Our Midst? (Hint: You Meet Them Every Day) 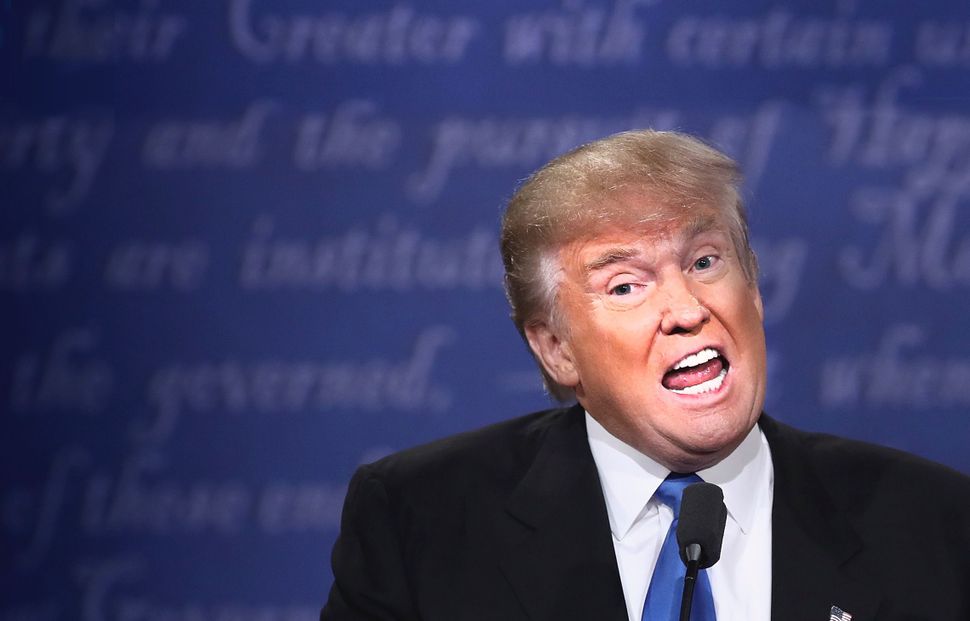 Like the scapegoat sent to the wilderness on Yom Kippur, so Donald Trump is now, at last, being disowned and disavowed by conservatives and Republicans of all stripes.

It’s all a little too convenient.

How many more Trumps are out there? How many men who brag about sexually assaulting women, who are serially investigated for assaulting women, and who somehow escape legal consequences for their actions? (Even Brock Turner, the Stanford rapist, is already free.)

It’s too easy to blame it on Trump. There is a continuum from chauvinism to rape culture. Indeed, many women have said, in response to the recent tapes, “Welcome to my life. Welcome to a world in which bullying, overconfident, uninformed men dominate conversations, use their power to coerce petty (and not so petty) sexual favors, and justify their actions with words like ‘locker room talk.’”

Oh, and he’s right — this kind of talk happens in locker rooms all the time. Locker rooms: the safe spaces of rape culture.

Of course, one end of a continuum is not equivalent to the other. But it is a continuum, not a convenient binary between good and evil. This is how a man can talk for 40 minutes and the woman for 39, yet the man complains she’s getting too much time. It’s how the man continues to interrupt over and over and over again, so used to interrupting women that he doesn’t even notice he’s doing it. It’s how men pace, glower, hover over women, pointing at them, lying about them — and do so out of habit and ignorance. Donald Trump may be the extreme, but he is not unique.

And how many more Trumps are out there: wealthy men who evade taxes, cut corners and enrich themselves with an army of lawyers, accountants and shysters?

Fine, let’s condemn Trump for creatively declaring a $900 million tax loss, which he then carried over for up to two decades. But how many in our own midst — in our business worlds, our communities — do the same? I don’t mean cutting a few corners on personal taxes. I mean the kind of professional theft that is only possible for the top 1% or 2% of society.

And then, to have the temerity to call this “smart.” Hardworking teachers, social workers and doctors who pay their taxes are dumb. Corrupt real-estate tycoons who parley inherited wealth into larger fortunes (albeit below the rate of an index fund) are smart. Just as Trump defends sexual assault by saying everyone does it, so he defends his hideous unpatriotism in the same terms.

But what if he’s right? In the Jewish community, we emblazon the names of the wealthy on the walls of synagogues. Most of them, I am sure, deserve the honor. But we all know that many do not. There are plenty of Trumps in our midst. They say it’s not cheating if they get away with it.

And how many more Trumps are out there: mini-dictators who, in their public and private lives, believe that the strong should dominate the weak?

At one end of this spectrum are the thousand indignities of entitled, wealthy men who treat other people like garbage. We all know that some of the Jewish community’s most prominent men do this, yelling and cursing like potty-mouthed children in their offices and homes. They berate rabbis, housekeepers, non-profit directors, administrative assistants, business colleagues and family members with equal degrees of vulgarity. We all overlook this, because they cut the checks. They sit on our boards. And yet they are foul, malodourous cretins, just like Trump.

Yet the petty and the profound are related: At the far end of this authoritarian spectrum lie actual injustice and actual tyranny. It is no coincidence that some of the same men who are little dictators in their personal dealings support anti-democratic policies in their political lives, whether it’s ending the Israeli democratic experiment or undermining the rule of law by threatening to prosecute political enemies.

It’s too easy to lay it all on Trump’s doorstep, to say that he is some kind of sui generis monster with no connection to the Republican Party. After all, three quarters of Republicans want him to stay in the race, even after he boasted that as a “star,” he can grab the genitals of any woman he wants. And a majority of Republicans put him where he is. And a majority of Republicans support his anti-democratic policies, sorting people by religion or race, bringing back racist “stop and frisk” policing, “bombing the hell” out of entire countries, while demonizing those countries’ refugees as criminals or terrorists. This is the reality of the Republican Party in 2016.

Trump isn’t the scapegoat. He’s the high priest of an angry, mean, bullying, anti-democratic part of our society. He is Fox News, the Tea Party, the fearmongers of the right with their lies about emails and Benghazi.

In fact, there are many kinds of locker rooms, not just the “boys will be boys” kind. I’ve been in rooms – Jewish rooms – where people feel safe to call our president racist slurs, where outrageous calumnies about Arabs and Muslims are exchanged with impunity, where casual sexism and low-level sexual harassment is still “how it is.”

The fact is, there are many, many more Trumps out there. In our society, in our families — even in ourselves, in the form of those reptilian, angry, unreflective urges that all of us, as human beings, have.

It is Donald Trump’s world. And we all live in it.

Who Are the Donald Trumps in Our Midst? (Hint: You Meet Them Every Day)