After Nice, We Should Fight Islamic State Terror With Ruthless Progressivism 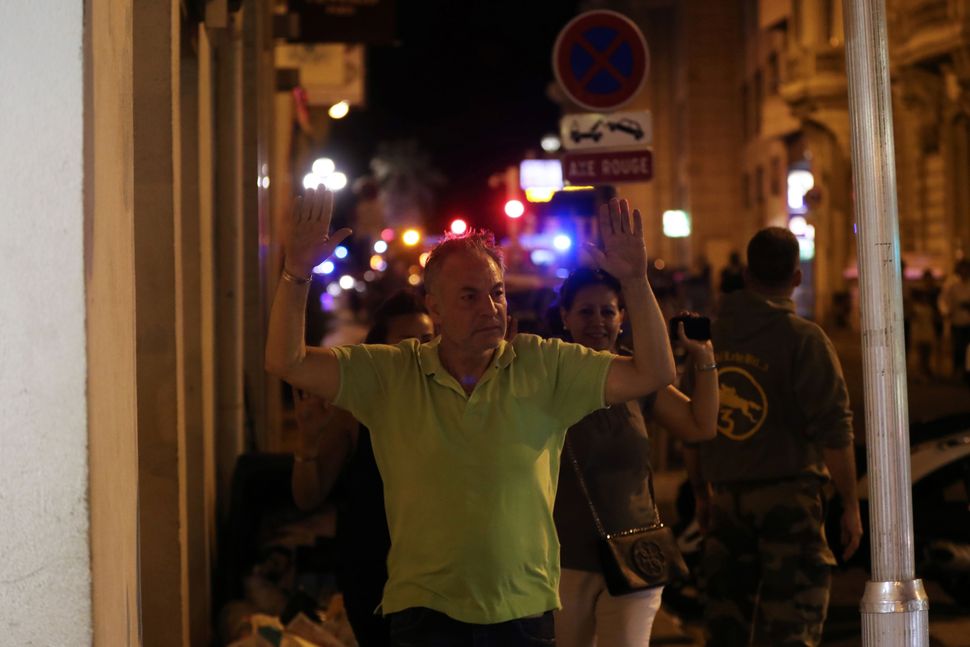 Bastille Day: A man raises his hands for police checks after a truck kills dozens in Nice, France. Image by Getty Images

Will this season of death ever stop? Nice, Dhaka, Istanbul, Orlando, Brussels, San Bernadino, Paris – and those are just the mass murders in cities we know. Over 1200 people have died in ISIS-inspired attacks around the world, not counting those in Iraq and Syria.

It is practically impossible to defend against an endless, global war of attrition like this one. ISIS is now more an idea than an organization, especially as it loses its hold on its home territory. Anyone can be “inspired by ISIS,” and the group will gladly take credit for the carnage. If they lack planes, they’ll use guns; if they lack guns, they’ll use cars; if they lack cars, they’ll use knives, machetes, even rocks.

But ISIS’s most dangerous weapon is us.

To achieve its ultimate goal of an end-times battle between Islam and the West, ISIS needs our participation. And it has honed its methods to provoke as much rage as possible. The more you know about the beheadings, drownings, rapes and mutilations, the more horrified you must, as a human being, become. The more you read about the victims of these attacks, from gay Puerto Ricans in Orlando to dancers and cosmopolitans in Istanbul, the more you must weep.

But the weeping and horror doesn’t last long. Rage comes to take its place. And so the West finds itself awash in nativism, right-wing populism, and xenophobia. It’s not inconceivable that Donald Trump will be president of the United States while Marine LePen is prime minister of France. It’s not impossible that a neo-Nazi will be the next leader of Austria. It’s quite possible that Europe, as we know it, will fall apart.

We stand at the brink of falling into a new dark age, with prejudice dignified as a form of political discourse and ignorance, as George Orwell foretold, being touted as strength.

We find ourselves magnifying ISIS’s body count. Now, not only do the casualties include 70 innocent people celebrating Bastille Day. Now they include our values, our freedoms and our friends.

Golda Meir once said, “We can forgive the Arabs for killing our children. But we can never forgive them for forcing us to kill their children.” The greatest casualty in Israel’s long battle with its enemies, Meir was saying, was Israel’s own humanity. Our own children, our own culture, had to become capable of killing.

This is the moral cost of responding to barbarism with barbarism. But there is also the practical cost. If, as nations in the West, we make rage our policy, we will do ISIS’s work for, and with, them.

If rage dictates our nation’s foreign policy, we will make foolish decisions, alienate our allies, and play right into ISIS’s strategy. We will turn more conservative Muslims into extremist Muslims. We will undermine the very moderates who are our greatest allies against religious extremist. If we say the West is at war with Islam (or “radical Islam,” whatever that means), we will make it so.

Progressives must not delude ourselves. Our goal must the complete, utter obliteration of ISIS and all that it stands for. No less than conservatives, we must hate this ideology and commit ourselves to wiping it off the face of the earth. This is our generation’s Amalek, and we must destroy them.

But conservatives must not delude themselves either. Amalek isn’t a people, religion, or culture, but an ideology that can be anywhere and everywhere at the same time. “Bombing the hell out of ISIS” will kill thousands of innocent people — in fact, the same people ISIS has been killing brutally for the last two years. Banning Muslims from entering our country won’t keep us any safer; it will just create more enemies from would-be compatriots. “Getting tough” makes sense on the ground in Iraq and Syria, where ISIS is, in fact, in retreat — but “getting tough” in fighting a shadowy enemy that is more an idea than a territory is stupid.

We need liberal means toward conservative ends: merciless moderation, ruthless education, overpowering carefulness. We must sublimate our rage into reason. Really, as I suggested after the Paris attacks, the real distinction shouldn’t be between Right and Left but between short-sighted emotional responses and cold, calculating rational ones.

For example, we must boost, support, fund, and amplify the voices of mainstream Muslim leaders who have condemned these attacks every time they have occurred — not simply because it is morally right to do so but because it is in our own best interests. The stronger moderate Muslims are, the weaker extremist Muslims will be.

Likewise, we must uproot Islamophobia, not simply because prejudice, stereotypes and discrimination are morally wrong –- but because they weaken moderates and strengthen extremists.

And, on a grand scale, we absolutely must stop the rise of nativist populism, because in the likes of Trump, LePen and Vladimir Putin, ISIS has indeed found its ideal dance partners: militaristic demagogues who will give them the “clash of civilizations” that they want. It is truly terrifying to imagine the consequences for the Middle East, Israel included, if Donald Trump becomes president. Nuclear war, which gave us nightmares in the 1980s but seemed to be extinguished in the 2000s, is no longer out of the question. Biological warfare has already taken place.

Indeed, if all this sounds like the end of the world, that suits the American Christian Right just fine. 77% of U.S. evangelicals believe the Rapture will take place during their lifetimes. Spookily, many have the same end-times scenario: a battle near Damascus, as prophesied by Isaiah 17:1, or near Megiddo, aka Armageddon. And they’ve put their checkbooks where their mouths are, with Christian Zionists funding the settlement enterprise and other initiatives that make confrontation more likely.

We are witnessing a nightmare unfolding around us in real-time: first and foremost, the unbearable losses to ISIS’s brutal barbarism; but secondarily, the evil it has awakened within ourselves. We face a moment of reckoning. Will we help ISIS destroy thousands, even millions, of lives? Or will we, individually and collectively, rise above our ‘inner ISIS’ and mercilessly uproot it from the world?

After Nice, We Should Fight Islamic State Terror With Ruthless Progressivism