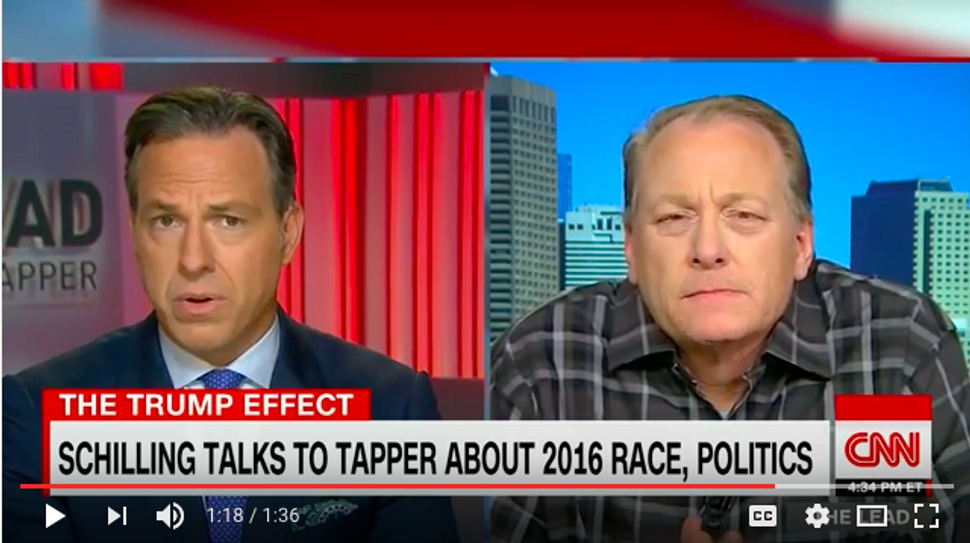 A former baseball player and sportscaster with political ambitions concluded a recent CNN interview by asking his Jewish host to speak for all American Jews and explain why so many of them support Democrats.

Jake Tapper, CNN’s chief Washington correspondent, was interviewing Curt Schilling about the World Series-winning pitcher’s decision to run for Senate when Schilling decided to become the questioner and take the conversation in a more personal direction.

He opened by stating his assumption that Tapper — because he’s Jewish? because he’s a journalist? — would either vote for Hillary Clinton, or at least not vote for Donald Trump. Tapper let Schilling know that he doesn’t vote in presidential elections, at which point Schilling plowed on.

“I would like to ask you something as a person who is practicing the Jewish faith and have since you were young, I don’t understand, maybe this is the amateur, non-politician in me, I don’t understand how people of Jewish faith can back the Democratic Party, which over the last 50 years have been so clearly anti-Israel, so clearly anti-Jewish Israel that I don’t know what else need to be done, said or happen — the Democratic Party is aligned with Israel only because we have agreements in place that make them have to be,” Schilling said.

Jews are traditionally ambivalent about the notion that any one of the group reflects on everyone else. On the one hand, descendants of Eastern European Jews still use the Yiddish expression, a shande far di goyim, literally, a scandal before the nations, which conveys the embarrassment Jews collectively can feel when one of their number does something shameful in public. On the other hand, many American Jews increasingly bristle at the idea that they should be held responsible for the policies of the state of Israel.

Tapper betrayed none of this complicated conflict, merely listened calmly, his expression unchanging. He answered immediately by saying that he doesn’t speak for Jews, or support either the Democratic or the Republican party.

“I would imagine, just to try to answer your question, one of the reasons many Jews are Democrats has more to do with social welfare programs and that sort of thing than it does for Israel,” Tapper said.

Schilling, who was fired from ESPN earlier this year after he shared a Facebook post that had anti-transgender overtones, nodded rapidly as Tapper spoke and acknowledged that it was “fair” for some Jews to decide their party affiliation on issues other than Israel.

Before ESPN fired Schilling, the network suspended him for posting a Twitter meme that compared Muslim jihadists and Nazis.

On October 18, Schilling announced that he was going to run against Senator Elizabeth Warren of Massachusetts in 2018, according to Politico.

On a later interview with Chris Matthews on MSNBC, according to another Politico report, Schilling defended his request that Tapper speak for all Jews, saying it made sense for him to ask an actual Jew his question, and insisting that liberals oversimplify Christian identity in the same way.