From Donald Trump to Israel and Europe, Why This Lurch to the Right? 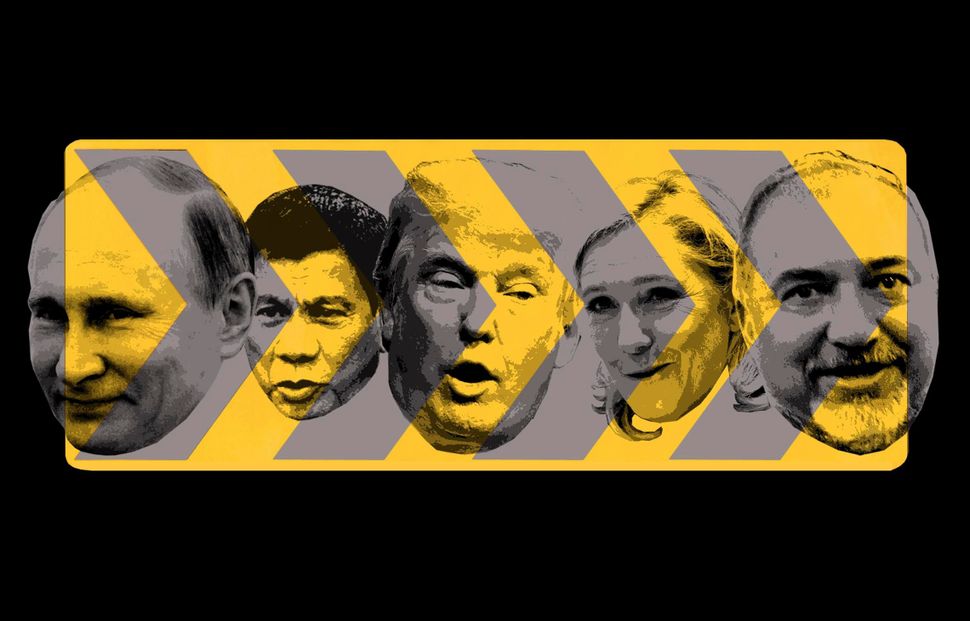 To quote Donald Trump, “What the hell is going on?”

The global rise of right-wing populism — in the United States, across Europe and now in Israel — is clearly the leading news story of 2016. Each week, Trump says something outrageous that hasn’t been said by a mainstream politician in half a century. And each week, his standing in the polls rises.

The trend is global. In Europe, the far right is growing in Hungary, Greece, France, the United Kingdom, and Austria, where the far-right Freedom Party came within a hair’s breadth of winning the presidency. A right-wing populist is now president of the Philippines. A right-wing legislative coup has taken place in Brazil, where a creationist is now minister of science and the Cabinet is all white men. And of course, the “second” President Putin has, since 2012, headed a revanchist Russian populist nationalist regime that has started wars, cracked down on dissidents of all types and renewed fears of a nuclear arms race.

“Extremist and dangerous forces have taken over Israel and the Likud movement,” that ex-minister, the widely respected Moshe Ya’alon, said in May.

What the hell is going on?

Arguably, as with instant messaging and hydroponics, Israel may have been ahead of the curve on openly nationalistic politicians. When Naftali Bennett and Ayelet Shaked formed various Israeli nationalist initiatives in 2011 and 2012, and when Bennett’s Jewish Home party won 12 seats in the 2013 Knesset election, his explicit rejection of the two-state solution and proposal for an apartheid regime in the West Bank (territorial annexation, with voting rights, freedom of movement and full civil rights only for Israelis, not for Palestinians) were considered extreme. Now, these are the positions of Israel’s ambassador to the United Nations, Danny Danon. (Danon has said that he will represent Netanyahu’s “two-state vision” in his official capacity.)

Lieberman goes even further back; he quit the Likud in 1997 because Netanyahu was too dovish. He’s since called Israeli Arab Knesset members “traitors” and advocated loyalty oaths and other McCarthyite measures.

Both Lieberman and Bennett were ahead of the global curve in terms of saying the unsayable, often (in Lieberman’s case) with the same kind of vulgarity and anger that distinguishes Trump’s rhetoric, and that of the UK Independence Party in England.

As commentators have observed, there are many reasons for the global rise in the populist right.

First, the economic order of neo-liberalism and globalization has not benefited everybody. Less-educated and less-mobile people, whether in West Virginia or West Jerusalem, have not recovered from the 2008 recession and are not part of the Start-Up Nation. The collapse of Europe’s social welfare state, America’s regressive tax and spending policies, and Netanyahu’s economic policies in Israel have exacerbated the wealth gap and fed resentment that the haves are getting better and the have-nots are getting worse.

(Ironically, the “cure” for the disease is often the same as its cause — conservative economic policies — Trump’s deviations from them notwithstanding.)

Second, the rise of migration, the persistence of Islamic extremism and the slow sunset of white supremacy in America (and the perception of that decline in Europe) have fed racist, nativist fears that many of us thought had been relegated to the dustbin of history. The Islamic State group continues to ratchet up the horror, recently executing prisoners by immersing them in a vat of acid. And the Islamic State ideology (if not its actual network) has been behind terrorist attacks in Paris, Brussels and around the world.

The liberal response — strengthen Muslim moderates, marginalize extremists — may be rationally the wiser choice, but terrorism evokes fear and anger, not reason.

There are other factors, too: the way information technology has changed our lives (and, again, has left the less educated behind); declines in religious morality; the Obama presidency; and some shift in the zeitgeist, beginning in 2012. But economics and fears of Islam and/or the Other predominate.

Israel has arguably been ahead of the curve here as well. After all, it’s been dealing with terrorism for decades (whether it is properly understood as Muslim, Islamist, Arab, Palestinian or something else, all are conflated by the nationalist right anyway). The fear of Islam-associated violence may be new to San Bernardino, California, but it’s not new to Safed or Beit Shemesh.

And Israel has long had a significant camp advocating for a strong and often violent response to that threat, and for openly fascistic qualities of nationalism: the Revisionist Zionist movement of Menachem Begin and Ze’ev Jabotinsky, whose fascist leanings are described in Eran Kaplan’s 2005 book “The Jewish Radical Right.”

Yet as Ya’alon himself said, the current government “is not the Likud I joined — the Likud of Ze’ev Jabotinsky and Menachem Begin.” There is more rage, more vulgarity, more open racism (remember Netanyahu’s Arab-baiting on the eve of his re-election?). Israel’s right may have been ahead of the curve for decades, but this particular far-right curve is steeper and more recent.

Of course, the horrifying irony of all this is that the European varieties of radical right populism are often anti-Semitic themselves, or spring from anti-Semitic roots. Whether it’s the Nazi imagery of Greece’s Golden Dawn party or the legacy of Jean-Marie Le Pen, the virulent anti-Semite who led France’s National Front party for 40 years before turning it over to his daughter Marine Le Pen (who says she has rejected her father’s anti-Semitism), you don’t have to be Simon Wiesenthal to see that the European radical right has indeed revived the unthinkable: Nazi-style fascism in Europe.

So, too, in the United States. Donald Trump’s son-in-law may be Jewish, but Trump’s Twitter account retweets white supremacists all the time and the candidate himself regularly tosses off low-level anti-Semitic remarks about Jewish money and power. Presumably, that won’t stop him from cashing Sheldon Adelson’s checks — and it apparently won’t stop Adelson from writing them.

Irony notwithstanding, it should be clear now that the Netanyahu-Lieberman coalition government is of a piece with the populist right of Europe and the United States. The anti-democratic laws, the race baiting, the appeals to fear and anger, the Islamophobia, the hard-line politics, the appeal to a “strong leader” (Netanyahu’s actual campaign slogan, Putin’s governing philosophy), the shocking pronouncements of overt discrimination, and now the appointment of an outrageous, divisive, unqualified figure to a key government post — all of these are markers of the new right-wing populism, whether it’s in France, Russia, Austria, the United States or Israel.

And wherever it appears, it is terrifying.

From Donald Trump to Israel and Europe, Why This Lurch to the Right?