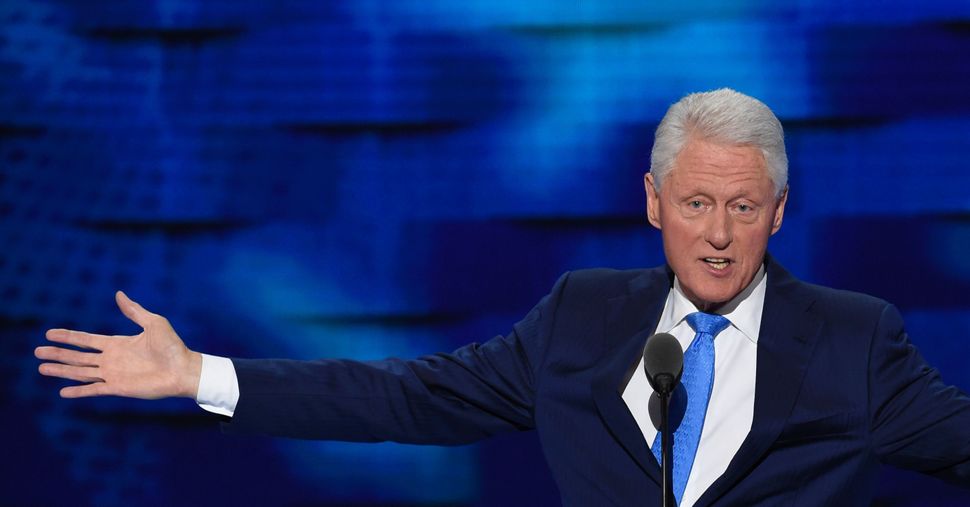 Love him or hate him, former President Bill Clinton delivered a masterpiece of oration last night, a “Checkers” speech for the 21st century. He also reminded us why the spiritual is political and the political is spiritual.

Clinton’s job was clear: humanize his wife, Hillary Clinton. Other people could talk about policy, or the threat posed by Donald Trump – but only Bill Clinton could give this kind of intimate portrait of a woman many people don’t like and don’t trust.

And so, we in the Wells Fargo Arena and everyone watching on TV were treated to a long, seemingly rambling series of anecdotes that, when viewed as a whole, was strategically and rhetorically brilliant. This was neither Bill Clinton the policy wonk nor Bill Clinton the ethically challenged president, but Grandpa Bill on his front porch in Little Rock (never mind Chappaqua), reminiscing about the love of his life.

The first part of the speech, as many have pointed out, was a little weird, describing a long flirtation and seduction that seemed to be from another, pre-feminist era. I actually think this was calculated as well. Bill Clinton depicted himself as a little out of touch and old-fashioned, until Hillary schooled him in how to behave. It positioned Hillary as Bill’s moral superior – a useful counterpoint to the efforts to tar Hillary with Bill’s philandering and other ethical lapses.

As he talked of their lives in the 70s, Clinton actually got me to believe that they were young idealists in love – not Frank and Clare Underwood, but actual soulmates. The crowd actually said “Awww” several times, and many people cried when Clinton described the birth of his daughter Chelsea. We were putty in his hands. I felt like I was being seduced, and I loved it.

Not that this is unproblematic. It was easy for me to imagine an earlier Bill Clinton putting the moves on a young, impressionable woman. And while I can safely describe his charismatic delivery as a kind of seduction, I wasn’t harmed by it, as those women may well have been. I loved being swept off my feet, but metaphorically, not actually.

And I noticed something else.

The press section where I was seated was located behind the podium, so we had a clear view of the teleprompter. Clinton departed from it dozens of times; probably about a quarter of his speech was improvised. And those were some of the best lines. Admitting that his image of Hillary was radically different from the demonic one painted by Republicans and Bernie-supporters alike, Clinton said “One is real, one is made up – you have to decide.” That was made up.

An anecdote about Hillary’s promise to help even the West Virginia miners who weren’t voting for her – not in the script. The stirring appeal to Muslims and African Americans who are unsafe in our country – improvised. The contrast of old people thinking about yesterday, but Hillary thinking about tomorrow – also, off the cuff. These moments revealed Bill Clinton’s greatest gift, which is his authentic presence. Back in the 1990s, his phrase “I feel your pain” was kind of a joke. But gradually, it became clear that he really did. The empathy, the connection – maybe it’s incredibly artful charlatanism, but it sure seems like a remarkable charisma that is less about Clinton puffing himself up than about making others feel seen.

There were a few African-American women in front of me last night, and several times, they did the kind of call-and-response common in black churches. Their reaction reminded me of Clinton’s own roots in black Southern communities, but also of what was really going on here: Clinton was preaching. Not in the sense of dogma or admonition, but in the better sense of sharing his truth, telling his story.

In a sense, the whole arc of the story was a redemption narrative. Bill told how Hillary’s love saved him, and how their shared political journey was also a spiritual one, committed to the ideals of justice. It was a testimony, a bearing witness.

In an age in which “social justice” is now a slur on the Right, this, too, was crucially important. It’s unfortunate that the word ‘justice’ is now so maligned, because it would be a crisp, unifying theme for the Democrats if it weren’t so abused. In Clinton’s speech, justice was the couple’s shared ideal, animating Hillary’s early work with the Children’s Defense Fund and Bill’s failed run for Congress. It elevated the various policy achievements that Clinton duly ticked off – they became less a laundry list of accomplishments and more a series of stops along the long road to justice.

And, crucially, it was a spiritual rebuttal to the odious slogan of “make America great again.” In a theological mode reminiscent of prophetic Judaism and progressive Christianity, Clinton insisted that America’s greatness can only lie in the future, as it becomes the “more perfect union” that the Founders intended. We act in partnership with them, furthering their vision more than they could themselves.

Few people have the charisma to pull off a performance like this. (Indeed, if there’s one downside to Clinton’s speech, it’s that it reminds us how Hillary suffers by comparison.) But even those of us without Clinton’s rhetorical gifts can learn from his personal example. The fact is, from Teddy Roosevelt to Barack Obama, Abraham Lincoln to Donald Trump, Americans vote for people more than platforms. (Indeed, Trump is probably the best example of this, as his ideas are completely incoherent and mere adjuncts to his cult of personality.) Those of us in the chattering class are obsessed by policies and issues, but most Americans, for better or for worse, are more interested in the person than in the ideas.

In the best case, the two come together, as they did in Clinton’s speech. These weren’t just policy positions; within Clinton’s religious narrative, they were part of his and his wife’s personal quest, their lives’ work. The speech humanized the political, and reminded us that our political commitments often reflect our deepest spiritual hopes. Donald Trump, in his dark way, did that last week.

And now Bill Clinton has crafted a profound spiritual alternative.