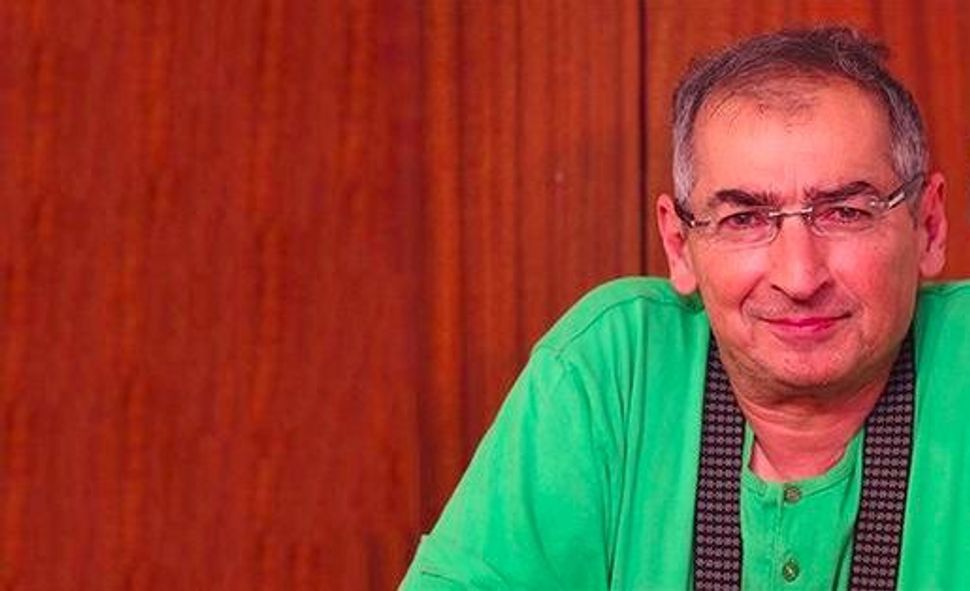 Need a little something hopeful to break our tense political mood right now? Look no further than this video of Iranian scholar Sadegh Zibakalam. A well-known professor at the University of Tehran, the 68-year-old is seen performing some very unique physical and political gymnastics as he enters a building at another university.

Even as everyone in Zibakalam’s entourage is content to step on the Israeli and American flags at their feet, Zibakalam refuses. First, he carefully walks around the Israeli flag in the entrance. Then, when he reaches the first landing, he climbs up onto the railing and shimmies across it rather than treading on the American flag.

Posted to Zibakalam’s Facebook page on November 5, “liked” more than 5,000 times and viewed on YouTube nearly 100,000 times, the video came with a message written in Farsi: “American and Israeli flags not stepped over when Zibakalam enters Azad University [a private nationwide university system] of Mashhad [a major northeastern city in Iran] to debate Hamid Rasaei [a conservative member of parliament].”

Wondering what motivated the Iranian academic’s behavior? Here’s some helpful background, courtesy of a 2015 profile piece in Tablet:

As is the case with many former revolutionaries, Zibakalam’s beliefs have shifted over the past 36 years. He is numbered among a group of former regime insiders, most prominently former president Khatami and the 2009 presidential candidates Mir-Hossein Mousavi and Mehdi Karroubi, currently under house arrest, who have become advocates of a more open society. “I was anti-West, anti-U.S. I was anti-Israel. I was very much what the Islamic regime is at the moment,” he said of his revolutionary student days. “But subsequently many of us, even those students who took part in seizing the American embassy in 1979, have changed.”

Over the past few years, Zibakalam has become an outspoken critic of Iran’s nuclear program, and in 2014 he publicly declared that he recognizes the State of Israel. Here’s Tablet again:

He argues that while hard-liners claim that the West is opposed to Iran’s nuclear activity because they do not want a revolutionary country like Iran to prosper, he says that the real reason for American and European opposition lies elsewhere: in Iranian rhetoric and action against Israel. “The reason that the West is nervous and opposes our nuclear program is because Iran has stated very precisely and officially that Iran is going to destroy the state of Israel. Therefore the Israelis — as well as everyone else — can be worried about this country becoming engaged in uranium enrichment. That’s why the United States, Israel, and Europe are against our nuclear program. If we had not stated that we are going to destroy the state of Israel, none of this would happen.”

Are Zibakalam’s views representative of all Iranians’ views on Israel and the West? Definitely not. Still, it’s nice to see this liberal firebrand taking a stand — and, when need be, a shimmy — for what he believes is right.