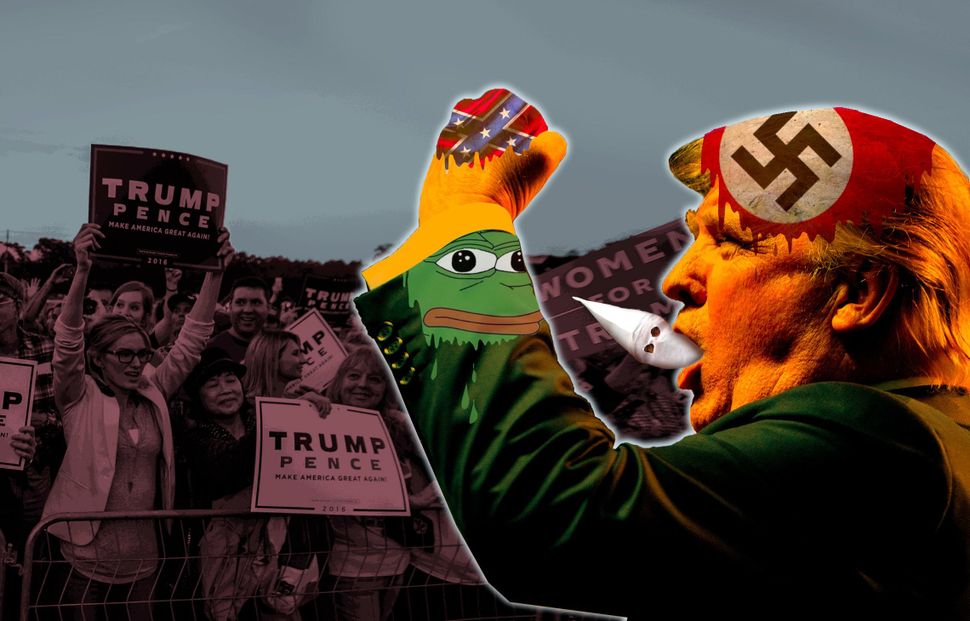 This year, one night before we commemorate that event, millions of Americans will cast their ballot for Donald Trump, whose candidacy for President of the United States is supported by neo-Nazis. There is a cynical aphorism about history — that its most consistent lesson teaches that humans consistently fail to learn from history. Seven decades after thousands of American soldiers died fighting Hitler’s army in Europe, the current election campaign illustrates this frightening truth.

For Jews in America, this election has revealed an additional truth that has not really been sufficiently acknowledged — perhaps because it is too sickening and frightening to think about. And that is that for the American media, which caters to the American people, it was the “Access Hollywood” video showcasing Trump’s misogyny that caused the biggest wave of outrage — and not his flirtations with fascism. Americans’ reaction to the video proved that they find insults to beautiful white women unforgivable; neo-Nazi affiliations are, on the other hand, discomfiting, but ultimately tolerable.

And yet, just as a minority of Italian Jews once joined Mussolini’s fascist party, there are Trump-supporting Jews who choose to overlook, minimize or dismiss the GOP candidate’s neo-Nazi affiliations. Jewish voters are overwhelmingly aligned with the Democratic Party, but about 19% of them support Trump — including casino magnate Sheldon Adelson, who has given millions to the Trump campaign.

For months, Trump played a delicate game of downplaying his neo-Nazi support by burnishing his Jew-loving credentials. He spoke at the annual American Israel Public Affairs Committee conference to a standing ovation. On other occasions he promised Jewish audiences he’d be the greatest supporter of Israel we’d ever seen. His daughter Ivanka, a convert to Judaism, has become the elegant face of her father’s campaign; and her husband Jared Kushner, a powerful New York businessman from an Orthodox family, is a senior adviser to his father-in-law’s campaign. Trump often trots out his Jewish daughter as evidence that he could not possibly be an anti-Semite; and while one Orthodox Jewish blogger slays that argument rather succinctly, so far the GOP candidate has managed to convince even many of his opponents that, while he is not a sympathetic figure, he is no Jew hater.

Despite the mountain of evidence that he is a real, old-fashioned, strutting and sieg-heiling type of Jew hater, Trump has for the most part managed to avoid being labeled an anti-Semite.

Even the Anti-Defamation League, which just issued a report documenting a sharp rise in anti-Semitic attacks on Jewish journalists during the presidential campaign, has pulled its punches. Responding to Trump’s last campaign ad, which mainstream American media labeled an overt rip-off of classic anti-Semitic tropes, Jonathan Greenblatt, the CEO of the ADL, said, “Whether intentional or not, the images and rhetoric in this ad touch on subjects that anti-Semites have used for ages.”

It takes a special type of denial, swallowed with a heavy dose of Kool-Aid, to convince an intelligent person that Trump’s embrace of language and images overtly taken from the “Protocols of the Elders of Zion,” white supremacist sites, the Ku Klux Klan, the “alt-right” and European neo-Nazi parties could possibly be unintentional. Especially given that the “alt-right” regards Trump as a near-messianic voice.

For months, Trump has given speeches laced with dog whistles to anti-Semites and racists. Supporters at his rallies have been filmed attacking black protestors with the “n” word and shouting “Jew S A” at reporters, the latter taunt referencing the conspiracy theory about Jews controlling the media. Trump has not reprimanded these supporters; asked by a CNN reporter whether he disavowed the support of David Duke, Trump claimed not to have known that the Klan leader had endorsed him.

But in the end it wasn’t the racism or the Jew hatred that shocked the critical mass of voters out of their apathy. It was misogyny. More specifically, it was misogyny against white women who fit our society’s current definition of conventional beauty. As long as Trump was insulting fat women or post-menopausal women, he got away with it. But it was the video in which Trump boasted to Billy Bush of his penchant for expressing his sexual attraction for women by grabbing their genitalia and kissing them by force — just before he was greeted by the slender, beautiful soap opera star Arianne Zucker — that caused the huge scandal.

Trump was not brought down by having called Rosie O’Donnell a fat slob, or by making vicious comments about Carly Fiorino’s face. His refusal to disavow his Nazi supporters never proved to be an Achilles heel. Nor was calling Mexicans “rapists” and “drug dealers,” or insulting Muslims, or mocking people with disabilities. Nor was he seriously undermined by the documented fact that he consistently tells huge lies — not just mere distortions, but statements completely unanchored in even a whisper of fact.

After months of being verbally battered by Joseph-Goebbels-sized fabrications and by words that were only recently beyond the margins of acceptable discourse, many of us have all but lost our ability to feel shocked at expressions of genocidal anti-Semitism, racism and extreme xenophobia expressed by the Republican candidate or his supporters. Despite all the evidence that Trump is a social deviant, the polls continued to show his support was frighteningly close to Hillary Clinton’s. Only when he was heard boasting about having committed sexual assault on slim, conventionally attractive, white women of childbearing age did the media begin to report that he was losing the support of women — even Republican women, and even white Christian evangelist Republican women.

What does it say about the state of civil society when people are outraged over sexual insults directed at women who represent an ideal of conventional beauty, but passive or only passingly upset over the resurgence of fascism? It says that fascism can win.

And it says that, no matter who triumphs in this election, America has already betrayed its Jews.

Lisa Goldman is a contributing editor to +972 Magazine, which she co-founded. She lives in New York City. Follow her on Twitter, @lisang