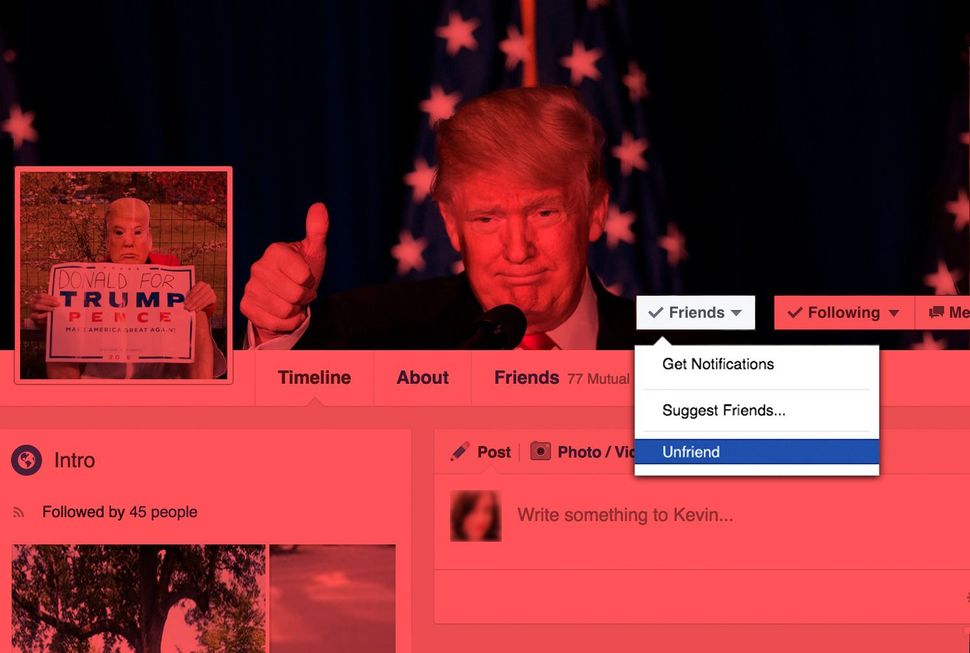 Donald Trump has won the 2016 election, so by all means, take the next 24 hours to cry, mourn, scream, panic, and beg your Canadian friends to marry you and run away together. And then, if you can, please get back to work.

Now that America has elected a racist, misogynist emboldener of white supremacists and anti-Semites, we should be terrified — and that terror should push us to do the hard work of healing this country, so that this never, ever happens again. We can’t leave this work up to the politicians. If we really want to change minds, if we really want to sway the (predominantly white, male, non-college-educated) voters who went all in for Trump, we all need to step up, starting now.

I’m taking my cue for how to do this from a widely read, gorgeously written October 15 article that Eli Saslow penned for The Washington Post, titled “The White Flight of Derek Black.” It tells the story of Black, the son of the man who launched the website Stormfront and the godson of David Duke. A budding white nationalist leader, Black was the sort of kid who ran his own “white pride” website for other children, and who helped popularize the idea of a “white genocide” on his dad’s radio show. When he went off to college, he hid his racist affiliations for fear of becoming a social pariah, but a student discovered his true identity and “outed” him, making him persona non grata on campus.

While everyone was busy shunning Black, exactly one student decided to take a different tack. Matthew Stevenson, an Orthodox Jew, invited the pariah to Shabbat dinner — and Black accepted. He got another invitation for the next Friday night, and the Friday night after that, and week after week he kept going. At these homey dinners, he became friends with a group of Jewish students who slowly began to see him as a human being, albeit one with repellent views. Black, too, began to see them as people who weren’t all that different from him. Gradually, these Jewish students chipped away at Black’s racist ideology until finally, in 2013, he disavowed white nationalism.

I find this story genuinely inspiring in the wake of an election season that has bred nothing but cynicism. It brings to mind that old Margaret Mead chestnut: “Never doubt that a small group of thoughtful, committed citizens can change the world; indeed, it’s the only thing that ever has.” Yes, Trump still won, partly on the strength of the white nationalist movement, but that doesn’t alter the fact that Stevenson changed the world when he invited Black to Shabbat dinner — a move that took a lot of guts, given Black’s deep unpopularity (this would have been like inviting the nerdy kid to your cafeteria table, times a thousand). And Stevenson’s other Shabbat friends changed the world with him when they opened themselves up to the uncomfortable experiment of trying to “convert” a racist over a bowl of cholent. If they hadn’t done this, Black himself might have become the next Trump-like president of the United States. He might have become Trump 2.0, poised to win in 2020.

The image of the Jewish undergraduates who invested so much energy in Black makes a sharp contrast with all the people who have spent the past few months unfriending Trump supporters on Facebook. This has become a major media story in itself, with BuzzFeed providing an instructional guide (“Here’s How To Delete Your Facebook Friends Who Like Donald Trump”), The Washington Post arguing against the practice (“Unfriending Trump Supporters Is Just Another Example of How We Isolate Ourselves Online”), and New York Magazine countering with a stubborn defense of its psychological benefits (“It’s Okay — Go Ahead and Unfriend Your Annoying Trump-Supporter Facebook Friend”).

I hadn’t unfriended any of my Trump-supporting Facebook friends, because I didn’t want to rob myself of the chance to better understand their motivations. In fact, for this reason, I’ve only ever unfriended one person throughout all my years on Facebook. That happened during the most recent Gaza War, when I was writing often about the Israeli-Palestinian conflict. Every single time I wrote something, this person trolled me, posting comments that not only countered the ideas in my columns (I’m fine with that) but that profoundly insulted all Palestinians and undermined their basic humanity (I’m not fine with that). After years of trying to reason with this person, I reached my breaking point and clicked “unfriend.”

This past month, after reading about the Jewish students who changed Black’s mind by reaching out to him rather than recoiling, I wondered for the first time whether I’d made a mistake: Should I re-friend this person on Facebook? Should I take a chance on a troll? Or would that just suck up mental energy I can’t afford to waste?

I swung back and forth on this for a while. Then, on election night, as I watched the needle veer terrifyingly in Trump’s direction, I went to this person’s profile page and clicked “add friend.”

I didn’t do it because I have great plans for us to engage in political debate on my public Facebook page. Real change, I realized, rarely happens in this online public forum, where people are so concerned with scoring rhetorical points and “likes” that it’s hard for all of us to relax out of our rigid ideological postures and open ourselves up to another point of view. The Shabbat dinners with Black worked because they were in-person meals, because real people were sitting across from each other at a real table laden with good food and drinks. They had opportunity to appreciate their basic human commonalities, and to engage in more nuanced debate, and to very slowly work their way toward some kind of understanding.

It’s this model — the “Shabbat dinner model,” if you will — that I’m challenging myself to adopt in the wake of Trump’s horrifying victory. Maybe I’ll invite my ex-troll for a meal (okay, let’s be real: maybe just a coffee or beer) next time we’re both in the same city. Maybe I’ll sit down with a Trump supporter or two.

Some people will tell you that it’s your responsibility to do this. I won’t use that language. Engaging in this type of conversation requires a ton of emotional labor, and I’m always aware of who is expected to perform such labor and why. Not everyone is privileged to have the bandwidth to be able to undertake this work at all times, and that’s all right.

But I will say this: If, in the weeks after Trump’s win, you do find yourself with the bandwidth to host a (literal or metaphorical) Shabbat dinner, now would be a really great time to do it.