4 Unknowns for Jews in Bitterly Divided America Under President Trump 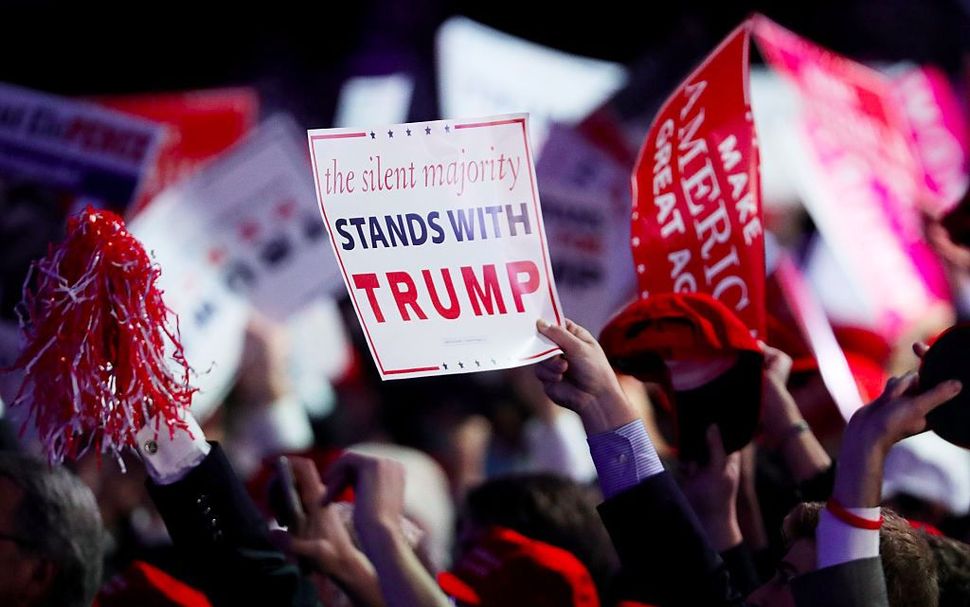 What are the takeaways for the Jewish community? Chief among them: Trump, and the class he represents — anxious, resentful and ready to make radical changes — was once largely invisible to Jews. That is about to irrevocably change.

Here are some questions the vote raises:

Campaigning hard for the state, he sought the support of its substantial Jewish community, in part by pivoting from relative coolness to Israel at the outset of his campaign to aligning with a right-wing pro-Israel posture by its end: Bashing the Iran nuclear deal, swearing to recognize Jerusalem as Israel’s capital, retreating from emphasizing a two-state solution to the Israeli Palestinian conflict.

“We will stand strong, we have to stand strong with the State of Israel in their fight against Islamic terrorists,” Trump told a rally Monday morning in Sarasota. He bashed President Barack Obama’s record on Israel.

“Hillary Clinton meets in secret with international banks to plot the destruction of U.S. sovereignty in order to enrich these global financial powers, her special interest friends and her donors,” he said.

Last Friday, he ran a final statement video ad, featuring excerpts of the speech – and this time attaching to it three famous Jewish names and faces (although he once again did not name Jews as a class).

The speech and ad culminated a campaign pocked with similar dog whistles, including Trump’s use on Twitter of images that originated on anti-Semitic websites. In debates and speeches, he several times invoked the names of little-known Jewish advisers to Clinton as emblematic of nefariousness.

Anti-Semites on the alt-right eagerly perked up at the whistles.

It’s tempting to liken this dilemma to that faced by Jews under President Richard Nixon, who was obsessed with what he believed to be the conspiracies against him by American Jews, but who adored their Israeli cousins. (And who also had trusted Jewish advisers, including his secretary of state, Henry Kissinger.) Jews survived Nixon, and still thank him for the massive airlift of arms during the 1973 Yom Kippur War.

But it’s different with Trump. Whatever Nixon’s weirdness about Jews, it did not permeate his campaigns; it became evident years later, as tapes he recorded became public, peppered with anti-Jewish epithets.

Moreover, Nixon was a relative liberal when it came to other minorities; while it is true that under him the Republican Party pursued a “Southern strategy,” sending coded messages to white racists, his policies, including desegregation and investing in the rise of a black middle class, would seem progressive today.

Trump, by contrast, has hardly been coded in his messages he sends about other minorities, especially Hispanics and Muslims, but blacks as well. And there’s also the matter of his record of misogyny.

That presents a host of dilemmas for Jews, conceivably forcing them to weigh their American identity, forged through a close association with the civil rights and feminist movements, and their loyalty to Israel. Cozying up to Trump as a means of keeping Israel on his good side would likely be seen as a betrayal among considerable swathes of the Hispanic, African American and Muslim communities, constituencies Jewish and pro-Israel organizations in recent years have been eager to cultivate.

Israel is the Jewish homeland. Israel is also foreign. Does Trump get that?

Trump seems to understand – at least in his more recent speeches – the importance that much of the Jewish community attaches to Israel as the homeland.

Trump also wants to pull up the drawbridge, to insulate America against the wider world, that would likely diminish U.S. influence.

The centrist pro-Israel community, led by the American Israel Public Affairs Committee, has for decades cast assistance to Israel as inextricable from the robust U.S. foreign presence overseas. Invest in U.S. influence in the Middle East, in Europe, in Africa, the thinking went, and Israel, as a close ally, could only benefit; America could, and did, leverage its considerable influence in those arenas to benefit Israel.

What holds back the expansion of the boycott Israel movement? What drew a broad array of nations to sanction Iran? The willing to leverage U.S. influence in the global arena, coupled with the willingness to expend U.S. largesse. Diminish influence, and leverage fades as well; there is not stick without carrots.

The formula advanced by Trump – and by the Republican party, which at its convention embraced closeness with Israel while retreating from engagement Israel – is that America will keep Israel close, whatever the vicissitudes of its relationships with other countries.

That raises tough questions for Israel, which chafes at the notion that it must rely on a great power to survive. It also casts American Jews as a protected class, able to seek favors for its homeland, while other ethnic minorities are cut off – not a status much of the American Jewish community would embrace gladly.

What happens to Jewish conservatives?

A good portion of the conservative resistance to Trump during the campaign was driven by Jews in the movement; Jewish conservatives had over the decades led the effort to make the party more amenable to other minorities and also argued for the holistically robust foreign policy described above. (Both postures, rejecting racial particularism and advocating expanded U.S. influence, were hallmarks of neoconservatism, a movement in which Jews are preeminent.)

The thinking until now was to let the election pass, to anticipate Trump’s loss and to rebuild the party.

Trump now is the party. Where do these conservatives go?

Who are these people?

Trump tapped into real frustrations with an American economy that, even as it grew, robbed the middle class of guarantees it once took for granted: College educations for the kids, pensions that lasted until death, a lifetime free of debt.

He also tapped into visceral fears among the portion of the middle class that is white, traditionalist and Christian, that the country looked like it less and less; that privileges that white middle Christians had never acknowledged – the protection of the police without considering what it cost marginalized communities, a culture with icons that were as white as they were, first dibs at jobs – were falling away.

That was a class that was to a great degree invisible to Jews, who are largely liberal, and who are confined to coastal enclaves.

Like the rest of the country, Jewish Americans must now contend with this population: Who are they? What are their legitimate grievances? What are the things they seek to preserve that are abhorrent to Jews?

How do we reconcile these things?

4 Unknowns for Jews in Bitterly Divided America Under President Trump