Donald Trump, Anti-Semitism and the New Socialism of Fools 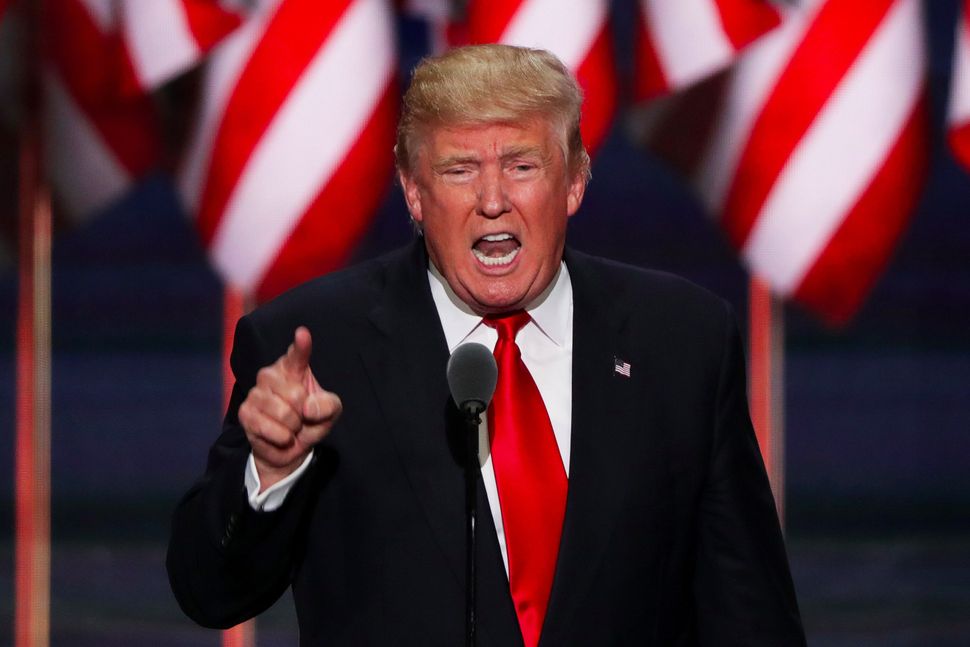 Trump won, so it looks like Trumpism did as well. Image by Getty Images

Here’s a little history for those just joining us: What’s long distinguished anti-Semitism from most other forms of oppression is that this form of bigotry presents itself as an anti-oppression ideology.

The anti-Semite doesn’t (in his or her view) hate Jews because ugh, Jews. Rather, the anti-Semite believes Jews to be an all-powerful force, a tyrannical aristocracy. Anti-Semitism, to the anti-Semite of the left or the right, is a social justice movement. A noble cause.

There’s been much talk, among Jews combatting anti-Semitism, of the ways the left these days refuses to include anti-Semitism among the forms of bigotry that are deemed worth combatting. The left, goes the thinking, either views all claims of anti-Semitism as surreptitious pro-Israel advocacy, or views Jews as too privileged to be oppressed. I promise I have on this, but that’s it for now, and, again, I highly suspect this isn’t the first you’re hearing on the matter.

What I haven’t seen discussed elsewhere, but what needs our attention, is the way racism – that is, the bigotry white people express towards people of color – has, in 2016 America, come to resemble anti-Semitism. Because, gah, it has! That is precisely what we’re seeing!

Eight years of black president followed by a female president was too much of a threat to white male authority.

As Filipovic’s tweet suggests, the new bigotry isn’t resentment at perceived ‘hand-outs’ but, rather, at achievement.

It’s important, though, when discussing white resentment*, to keep the following in mind: Just as anti-Semitism isn’t actually a response to Jewish wealth or power, nor is this new racism, which presents itself as a punch up, actually all that much of a response to a new order where people of color are, all of a sudden, richer and more powerful than white people. That’s… not what’s happening. Rather, it’s that white people have cherry-picked examples, some stronger than others (a black president, a big deal, at least symbolically! a bunch of think-pieces about black student protestors at elite colleges, maybe not representative of much!) and decided that Times Have Changed.

And so we’re left with a new racism – a newly election-winning racism – that understands itself as a fight against the “privileged”, a category that’s long since stopped just meaning the “rich,” but that now evidently includes (from Trump supporters’s perspective) not just Jews but all non-white, non-Christian Americans, all of whom get to fall under the euphemism of “urban elites.”

Really would prefer not to hear the term “white working class” again in my life.

And then there’s that mantra of the moment, the White Working Class. An expression that may have once referred to a demographic, but that’s come to suggest that the working class is only white, and that white people (even rich ones) are the real victims as well as (conveniently enough) the only real Americans. Rather than addressing concerns of the entire country, Team Trump opted to go full Tumblr-identity-politics with this. So it’s not just that white working-class Americans have certain concerns, some of which had been overlooked. It’s that their issues are the real identity issues, speaking callously about their plight the real microaggressions. So now, thanks to a Trumpist racist victory, we have to have this national soul-searching about how white Americans have been wronged.

Donald Trump, Anti-Semitism and the New Socialism of Fools