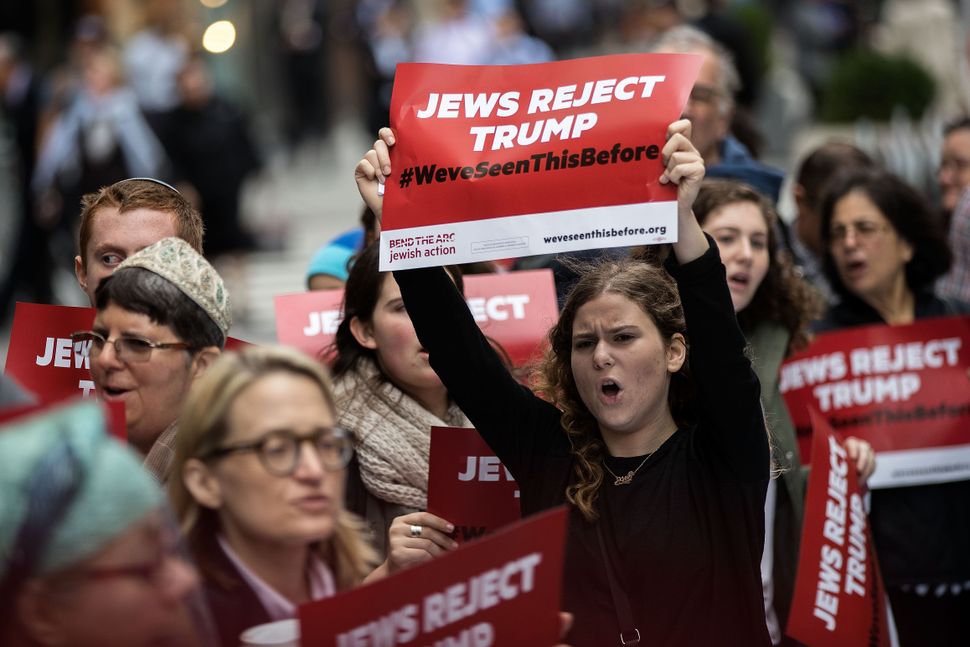 After America elected a man I consider a proto-fascist, a man who used blatantly anti-Semitic tropes in his closing campaign ad, I wish mainstream American Jewish organizations had paused to think before cozying up to his incoming administration.

Yet the Jewish Federations of North America penned a letter congratulating Donald Trump, appreciating in particular his “message of conciliation.” The also jumped to congratulate Trump, though they did invite him to “assure the nation” that America would “live up to its highest ideals.” The Conference of Presidents of Major American Jewish Organizations praised Trump’s “clear commitment…to ‘bind the wounds of division’ after a long and bruising campaign.”

If mainstream Jewish organizations are so interested in a seat at the table in Trump’s America that they’ll issue offers of congratulations on Day 1, we should worry about their ability to protect American Jewish interests and advance our values in Washington.

This is not a partisan question; it is a question of basic safety for American Jews and for (sometimes overlapping) targeted groups like women, immigrants, people of color and Muslims.

Our government has been captured by leaders who rode a wave of anger, resentment and bigotry to electoral victory, attacking pretty much every non-white and non-male group of Americans along the way. The open anti-Semitism of the so-called “alt-right” has helped elect an American president. Trump has failed to denounce the rhetoric of former Ku Klux Klan leader David Duke and of white nationalist supporters. As a result of Trump’s behavior, by publishing this article, I may be targeted by Trump’s anti-Semitic followers, subjected to pictures of my face entering the gas chamber. This has happened to dozens of Jewish writers already.

I do have compassion for the mainstream Jewish leaders who are trying to play the game by the rules that got them to where they are today. Realizing that the world has changed — and that cozying up to power doesn’t work when power looks like this — is hard.

But I have hope because they are Jewish. We know from history. Jewish history is full of examples of us being the ones who stood against the organized power of oppressors for the good of ourselves and humanity. And it is also full of examples in which we took too long to admit that the world was crumbling around us. As T’ruah’s new pledge by rabbis and cantors states:

Jewish history has taught us that fascism arrives slowly, through the steady erosion of liberties. And we have learned that those who attack other minorities will eventually come to attack us. To our great dismay, we learned this truth again when, during this election campaign, anti-Semitism rose to the fore, along with racism, Islamophobia, xenophobia, misogyny, and homophobia. For some Jewish leaders, there will be a temptation to accommodate the new administration in the hopes of protecting our own community’s “interests.” As Joseph learned long ago, and as the Jewish community has learned time and time again, proximity to power does not guarantee protection in the long run. Nor can we ignore the fact that our Jewish community includes people of color, immigrants, women, LGBTQ people, people dependent on the social safety net, and others at risk for reasons beyond Jewish identity. Jews will not be safe until every one of us is safe in a just and democratic society.

This sentiment isn’t way out on the margins. For other examples of it, look at the statements by Democratic Senate Leader Harry Reid, Bend the Arc and the California Legislature. Look at the Anti-Defamation League’s commitment to “not shrink from the fight ahead [against bigotry and anti-Semitism] regardless of where it takes us.”

Fascism depends on us tacitly approving of being separated from one another. It depends on us fearing that we will be left out and therefore acting to protect only our family and our interests. It depends on dismantling our ability to imagine a society where we care for and love one another. Fascism hopes to rearrange the way we make sense of the world and our sense of what is right and wrong. It all happens because we end up believing it’s normal, because we redraw our red lines to avoid confronting the terrible truth that a comfortable reality we once enjoyed may be over.

Jewish leaders, please stop acting like this is normal. It is not normal. Before you issue your next statement, remember our history. Do not normalize; resist. We need you to lead.

Isaac Luria is a Jewish organizer based in Brooklyn, and a member of IfNotNow, which is calling on the Jewish community to join the mutual defense and resistance against Donald Trump.