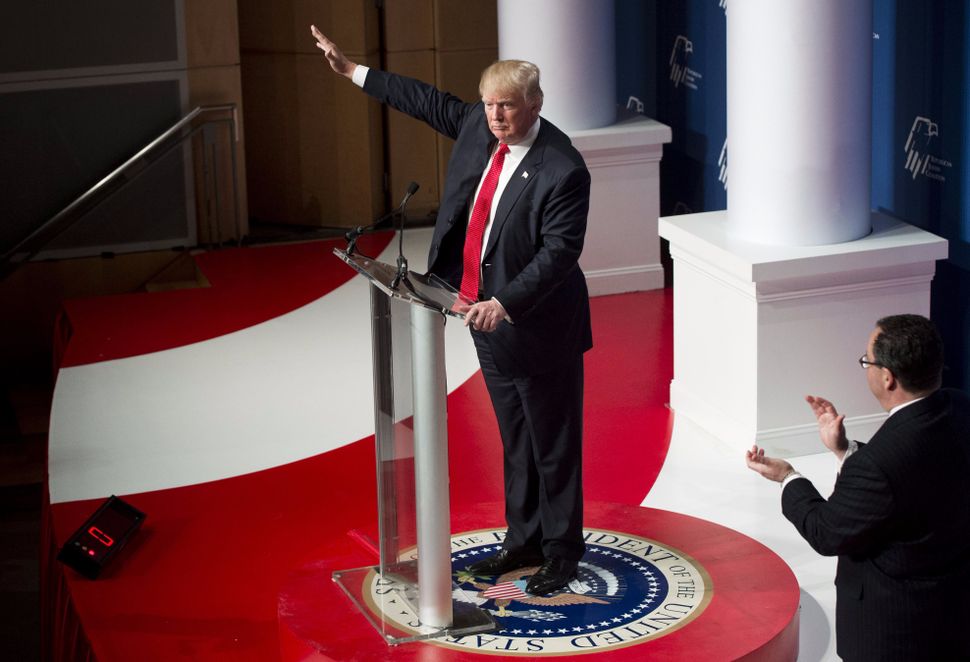 It was 1:30am on election night and it was clear that Donald Trump was on the threshold of a stunning electoral victory. This was not the night I had been expecting. I plugged in my laptop, took a deep breath, and wrote the first words that came to mind: the “Jewish Council for Public Affairs…congratulates Donald J. Trump on his victory.”

I did not, of course, stop there. The draft also urged the President-elect to “bring the country together” and “assure the nation, particularly constituencies feeling most vulnerable, that the country will live up to its highest ideals and respect the rights of all people.”

How could we issue a statement on the election without respectfully congratulating the President-elect? Little did we realize…

Shortly after we issued the statement, the irate comments came fast and furious. Peter Beinart tweeted “Just got email from @theJCPA ‘congratulating’ Trump on his victory. He doesn’t need your congratulations. We need your resistance.”

Several distraught followers of our Facebook page immediately accused us of selling out, on the anniversary of Kristallnacht no less!

One professional from a Jewish social justice group begged us to take down the statement, worried that it might offend our ethnic and religious partners.

Another accused us of Shtadlanut, a term used to describe, often in a derogatory manner, the practice of Jews in 19th-century Poland kissing up to the governing authorities.

I understand these sentiments. Many people were shocked and angry. They were in stage one and two of the five stages of grief — “denial” and “anger” — and, less than eight hours since Trump was declared the victor, we were already seemingly in stage five, “acceptance.”

In a column titled “No, Let’s not congratulate him,” Pulitzer-prize winning columnist Connie Schultz gave expression to this raw, early sentiment: “This is not a sporting event. This is not about good manners. Sometimes there is no deliverance in the fake smile, the phony congratulations.” She continued: “Don’t ask us to congratulate him. Not today. Not this week. Not ever, probably.”

In the hours after we released our statement, JTA came out with an article, “Congratulating Trump, Jewish groups call on president-elect to unite the country,” citing the numerous other statements from Jewish organizations that were similar in tone and wording. They, too, congratulated.

The NAACP led off with “Even as we extend our congratulations to President-Elect Donald J. Trump,” cleverly cushioning the blow, but congratulating him nonetheless.

The real reason our statement and others like it were so jolting to a segment of the Jewish community is because it hinted at an unpalatable but undeniable reality: Trump cannot be treif to us. Despite all the objectionable things that the President-elect said and did during the campaign, many Jewish and non-Jewish groups must eventually come to the table with the new Administration in the hopes of influencing its policies and politics.

These angry critics understood what we will eventually do but that they were not ready and may never be ready to do themselves. Anyone familiar with the mission of JCPA surely knows that rather than engaging in protests at Trump Tower, we will be identifying interlocutors in the White House, sending letters and holding meetings with key officials.

They understood that we will not be adopting an unbending adversarial stance, but will be joining forces with other likeminded groups with similar interests to petition the government.

We will urge the Administration to support our issues, such as immigration and immigrant rights, criminal justice reform, the environment, health care for those who can’t afford it, and a woman’s right to choose.

We will urge the Administration to protect our democratic tradition and the institutions of our great democracy.

We will urge the Administration to engage the world in a spirit of cooperation and respect, support our allies and fight for human rights.

We will support the Administration when it does something we agree with, and oppose it when our values and the issues we care about come under threat.

In the end, we will do what some cannot bear, but what we feel must be done. We will engage the Administration, not in violation of our values but in service of them.

Congratulations President-elect Trump. We have an agenda to discuss with you.

David Bernstein is the president of the Jewish Council for Public Affairs.