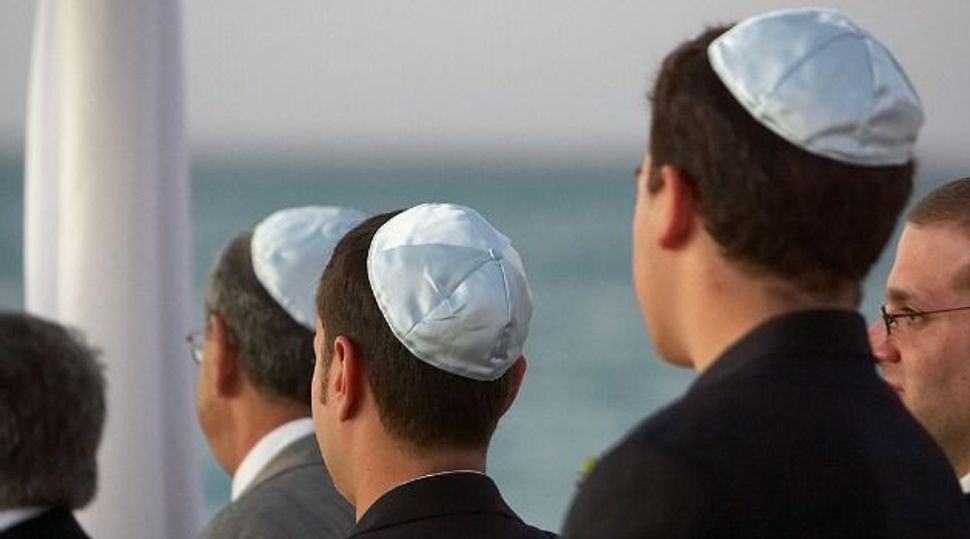 In the wake of Donald Trump’s victory, with the Southern Poverty Law Center reporting over 400 incidents of “hateful harassment and assault,” and Steve Bannon designated as chief strategist for the White House — how important is it to get our response to fear exactly right? Can we feel our way through various responses, even if some of them are fraught or others lead to charges of slacktivism?

Aaron Steinberg-Madow is a 25-year old progressive Jewish communal professional living in the Bay Area. Since the election, he says, he has “never been more afraid” in his “entire life.” For now, he is trying to spur others to action with a campaign called Hineni: Jews on the Streets in Trump’s America.

The campaign calls for Jews to wear a kippah (or some other religious symbol like a Star of David or hamsa) as an act of solidarity with those most vulnerable. As the Hineni website says, “Our message is that of Abraham to G-d: Hineni, I am here, to do what is necessary. As public Jews in this moment, we will leverage our Jewishness to be there for and with all those who are under attack.”

Aaron plans to order kippot and buttons that say “solidarity” in Hebrew, English, Arabic and Spanish. He was inspired to include Arabic by Israeli writer Almog Behar’s short story “Ana Min Al-Yahoud,” (Arabic for “I am one of the Jews.”) Aaron sees the inclusion of Arabic on a kippah as “radically subversive.” He wants to send a message of support for “the rights of Arabic speakers in the U.S. to live in freedom and dignity.” But the campaign is intended to show solidarity to all groups affected by Trump’s racism and xenophobia — including people of color and LGBTQ individuals. 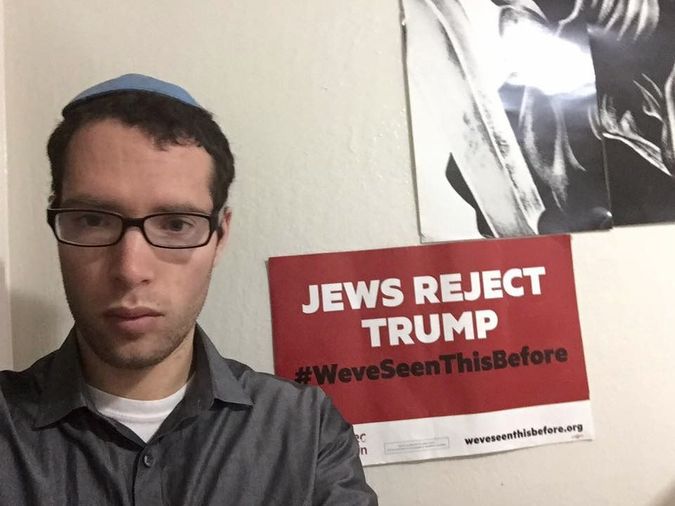 Still, Aaron’s campaign raises some difficult questions. Might a kippah — sometimes associated with more conservative values and with certain brands of right-wing Israeli nationalism — signal the opposite message than the one the campaign intends? And might conspicuous religious garb increase our apparent differences at a time when unity is needed? Unlike other cultural signifiers — food, music, dance and language — which can be enjoyed across ethnic boundaries, religions, as discrete theological systems, are arguably more specifically bounded.

I admit that I hesitate to even write these words, not wanting to contribute to prejudiced sentiment against any group, religious or otherwise. Still, I find, these questions are nagging at me.

Aaron has thought this through. As for not wanting to signal right-wing Israeli nationalism, he has chosen to wear a kippah that does not resemble the knitted kind favored by Israeli settlers. Plus, he insists, this is the time “to assert a bold particularism in the service of universalism.”

The idea of wearing something to signal solidarity isn’t new. In the week since Trump’s victory, some have taken to wearing a safety pin to indicate to those most vulnerable that the pin-wearer is able and wiling to serve as an ally.

Some would mock such campaigns as slacktivism. To that, I would echo Aaron’s remark that “wearing a kippah is not the end of the road; it’s just the beginning.” Americans can march in the streets and call their senators to call on Trump to rescind the appointment of Bannon. North American Jews can place pressure on Jewish Federations of North America to respond to Trump’s victory in a way that signals pressure and concern, rather than the disturbingly warm message the organization did send. You don’t have to be American to donate money to groups like the American Civil Liberties Union, Planned Parenthood or Southern Poverty Law Center. And everyone can use this as an opportunity to encourage coalitions to address oppression in various corners of the globe.

Even if some symbolic acts threaten to devolve into slacktivism, one could argue that everyone deserves to participate in campaigns that comfort and embolden. Aaron admits that “the only times I’ve really felt not so afraid is when I’ve been organizing.” I relate to Aaron’s emotional experience. When I write, when I engage with others in a public way, when I declare allyship, I feel a little better — not necessarily just about myself (which is, admittedly, about ego), but about the present and the future.

Many of Trump’s most disturbing policies will have ripple effects across the border and across the globe. Many of his hateful actions and rhetoric have already made us think of our own history and are spurring us to do what we can to resist. The alternative to action — however symbolic — is to risk drowning in our own fear and rage.