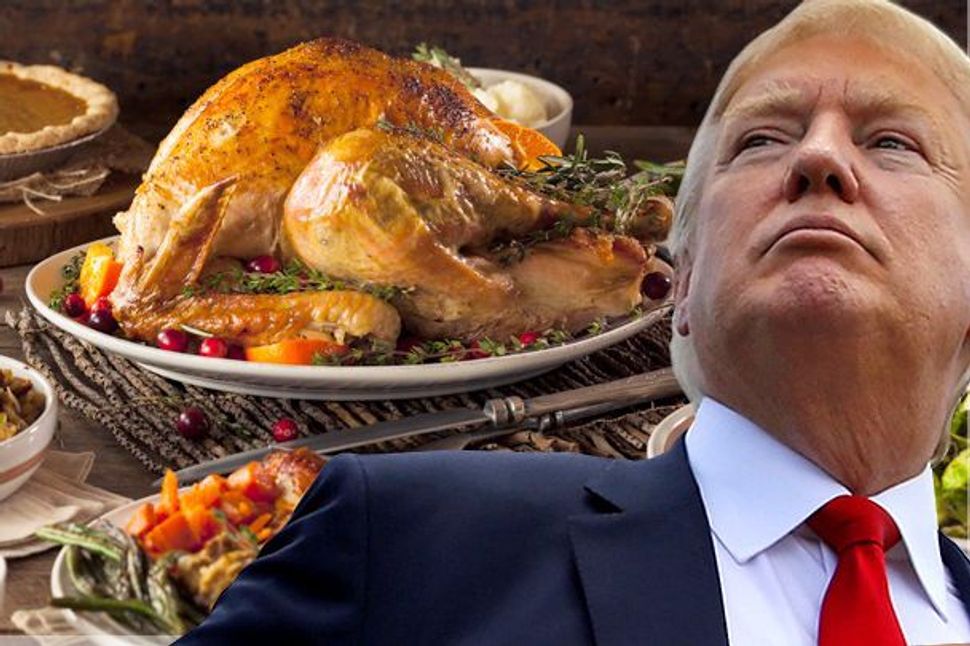 My father has the Trump lawn sign. And the bumper sticker. And the hat. And the T-shirt. “Make America Great Again,” they say.

Ever since he was shot at during a robbery in his drugstore, my once liberal father has become increasingly conservative. He is a regular Hannity listener and O’Reilly watcher. As I’ve gotten older, I’ve made appeals to his sense of justice in an effort to convince him to reconsider his right-wing positions. I have completely and utterly failed.

The day after Election Day, I boarded a plane to my father’s neck of the woods, and he picked me up at the airport. We had arranged that I would stay with him and his wife, who had also voted for Trump. In a state of fear and elemental sadness, I couldn’t imagine staying in a house of gloating Trump voters — even if they were family. Panic set in. Some friends suggested I change my plans and stay with someone else.

Ultimately, I decided to stay with my father, as we had planned. Not because I have any faith that anything related to the impending Trump presidency can resemble a feel-good story. No, as a Jew, as a gay man, as the spouse of a black man, I don’t anticipate any happy endings here. Instead, I decided to stay in my father’s house because I saw it as a protest against the new administration. Trump has risen to power partly on a promise to divide loved ones from each other — to destroy millions of families. I refuse to let him destroy mine.

So how do you survive sitting in the same room as a person you love, who voted for a person you fear? With Thanksgiving coming up, many of you might be asking that same question. I’m here to tell you how I managed to endure it — and to offer suggestions:

In the immediate aftermath of the election, I asked my father and his wife if we could avoid discussing the topic. I also asked if they might take a break from watching Fox News, at least for one night. They agreed. So, decide in advance whether and how you’re willing to talk politics. It may be that you’re only willing to discuss other topics.

When we did have the conversation, I expressed what I feared from a Trump presidency, both for my family and for the country. My father did not see the issues the same way I did, but I knew that I was heard.

The mitzvah of tochecha (rebuke) requires Jews to give a gentle correction to those who are committing a sin or transgression. But our sages amended that mitzvah, forbidding one from offering a rebuke if the speaker knows it won’t be heard. Putting yourself out there to reproach resistant family members may not only be ineffective; it may leave you feeling worse rather than better.

4) Don’t litigate the past.

Because of the shared history, arguments with family can quickly metastasize. If you decide to argue politics, make sure that’s the actual topic. An argument about Trump’s immigration policy is not the same as an argument about why your mother never came to see you in the school play. Make sure you know the difference.

If you are feeling overwhelmed, excuse yourself. Ask a friend to be on stand-by, ready to receive your distress call. Step outside, and take a walk around the block.

A circular argument over turkey dinner will not help the people who are most threatened by a Trump presidency. If you’re getting nowhere, stop yelling and make a commitment to make a difference — whether it’s financial, political or personal.

In times of uncertainty and insecurity, Jews have had to pay tragically high prices. We simply do not know the destructive forces a Trump presidency may unleash. This is no time to cut off communication with or lose track of family members. While staying at my father’s house, I made the decision to recite the morning prayers out of his old siddur, the prayer book he was given upon becoming a bar mitzvah. Even if we couldn’t connect philosophically or politically, the small white siddur connected the two of us to our shared spiritual tradition. As I prayed, the words ahavah rabbah ahavtanu leapt off the page. “God loves us with a great love.”

In a time of fevered hate, this love may be our best hope. I am deeply troubled by my father’s politics, which I feel threaten both my family and our country. He knows I feel this way. He disagrees.

But that can’t take away my love for him. I pray that the greatness of love only grows in intensity and scope, flowing into every corner of our country, a love for all people of all nationalities, religions, sexualities and abilities.

And when it does, America truly will be great again.

Rabbi Michael Rothbaum is Bay Area Regional Co-chair for Bend the Arc: A Jewish Partnership for Justice. Follow him on Twitter, @Rav_Mike