Keith Ellison Vows To Give Democrats Their Groove Back — Will Louis Farrakhan Haunt Him? 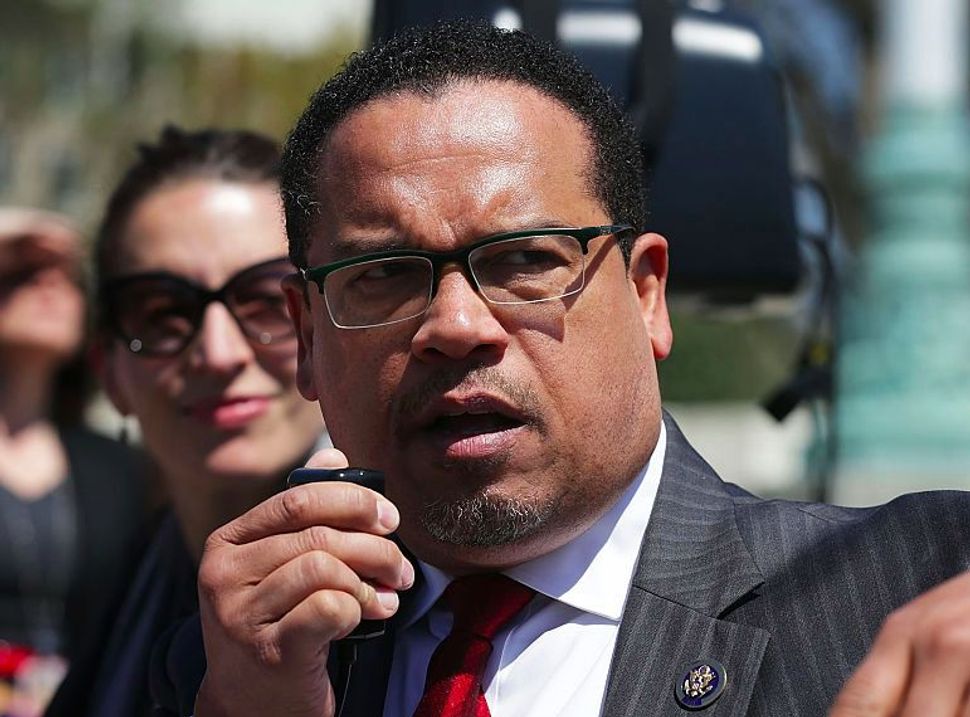 Representative Keith Ellison of Minnesota is a politician in a hurry. A decade ago he became the first Muslim ever elected to Congress. Now he’s running for the chairmanship of the Democratic National Committee. That would make him the first Muslim to win a position in America’s national political leadership.

Ellison, 53, says he’d prefer to be thought of as a politician who is Muslim, rather than a Muslim politician. In an exclusive interview with the Forward, he expressed a variety of strong views not usually associated with Islamic orthodoxy, much less militancy — for example, on gay rights and marriage equality, women’s equality and empowerment, public education and support for U.S. military veterans. In today’s America, though, there are certain things you can’t escape or wish away. Carrying the baggage of Muslim identity in post-9/11 America is one of them.

Ellison’s baggage is particularly awkward. Raised Catholic, converted to Islam at age 19, he spent a number of years in the orbit — how deep and for how long are sharply disputed — of the notoriously anti-Semitic Louis Farrakhan, leader of the Nation of Islam. Ellison’s detractors, most but not all Republican partisans or pro-Likud activists, cite a series of actions and statements over nearly a decade. Ellison himself portrays the allegations as exaggerated, sometimes simply fabricated.

The association, he said, was a fairly brief involvement in a community-wide effort to mobilize participation in Farrakhan’s 1995 Million Man March and Day of Atonement: “I was a member of a diverse organizing committee, working with people who were involved in the Nation of Islam, in the African American community and other communities.” He emphasized, though, that he does not regret being involved with the march. “The march was a good thing. It was a demonstration of solidarity. If it had a downside, it was the leadership of it.”

Most important, Ellison says he distanced himself once he understood the reality of Farrakhan’s anti-Semitism. As a young black activist, he’d initially regarded the anti-Semitism charges against Farrakhan as one more white attack on a black leader. And he occasionally said so, as his opponents gleefully remind us.

It was while listening to a pre-march speech in Minneapolis by the incendiary Farrakhan lieutenant Khalid Abdul Muhammad that he realized the viciousness of the movement’s bigotry, Ellison said. “He gave a horrible speech,” he said. “It was embarrassing. That was one of the things that started making me see that Farrakhan and him were not really about helping African Americans, but about doing racial pandering and helping themselves.” And, as he admitted in a 2006 letter to the Jewish Community Relations Council of Minnesota, “I should have come to that conclusion earlier than I did.”

Israel is another flashpoint. Critics depict him as an anti-Israel leftist who voted in 2014 against funding for Israel’s Iron Dome anti-missile system and who supports the BDS movement to boycott Israel by sharing platforms with its advocates. Backers describe him as a supporter of Israel who’s voted for every Israel aid package but one, who opposes BDS and takes flak for it from the left, who stands on platforms with fellow leftists and Muslims and publicly defends Israel’s rights. Critics say he was a key player in a bid to inject anti-Israel language into the 2016 Democratic platform. Party leaders publicly credit him as a leader in turning back that effort.

“He’s the first Muslim elected to Congress, and if he supports us 70% of the time, that’s great,” said Minnesota state representative Frank Hornstein, a longtime Jewish community activist who’s been friends with Ellison since they entered the legislature together in 2003 and ended up in adjoining offices.

“If we’re expecting another Chuck Schumer, we’re not going to get it,” Hornstein said. “But there’s a lot of benefit to having someone who has credibility on the left and is defending Israel.”

Choosing the next DNC head is turning into an unaccustomed scramble. At least a half-dozen candidates are vying for what’s traditionally been a thankless, low-profile job. What’s raised the stakes this year is the party’s November 8 debacle, which has left it with a leadership vacuum and a serious identity crisis.

Several factions are jockeying to set a new course for the party. Most observers describe a struggle between the party’s Hillary Clinton and Bernie Sanders wings. They in turn represent a struggle either between the Washington establishment and the left-wing opposition or between the identity-politics/coalition-of-minorities strategy and the win-back-the-white-working-class insurgency. The choice of a leader when the full committee convenes in February should signal which faction is on top.

Ellison, a co-chair of the House Progressive Caucus and a top Sanders supporter, is emerging as something of a front-runner. He’s backed by the party’s outgoing Senate leader Harry Reid, incoming Senate leader Chuck Schumer, plus superstars Sanders and Elizabeth Warren. But Clinton and President Obama are said to favor the more centrist former Michigan governor Jennifer Granholm.

The case against Ellison isn’t merely his erstwhile Farrakhan association or his Israel views. Figures in the Democrats’ Washington establishment reportedly worry that he’s too left wing to build a party that appeals to the mainstream. He’s seen as too tied to the Sanders camp, too populist on economics. He’s too associated, ironically, with the school that sees the party’s future with the white working class, not just in appeals to minorities. At the same time, paradoxically, cynics say it’s precisely his identity as a Muslim and an African American that makes him the perfect reply to the anti-Muslim rhetoric of President-elect Donald Trump.

By bridging the divide between the identity-politics and economic-justice wings, and by bringing youth and charisma to a mostly aging, worn-out Democratic leadership in Washington, Ellison may appeal to many — including in the Jewish community. “I’ve seen him bring down the house several times in mostly white union halls,” said Hornstein, the state legislator.

Ellison says seeing a conflict between identity politics and lunchbucket liberalism is a mistake. “If you try to choose between the civil rights communities and the white working class, you’re going to lose both,” he said. “If you’re working class, you still have civil rights concerns, whether they’re age discrimination, disability rights or veterans’ rights. On the other hand, if you’re a person of color, you still need better economic conditions.”

He also touts his ability to reach the grass roots, white and black alike, and to mobilize turnout on Election Day. His own 5th congressional district in Minnesota used to have one of the lowest turnout rates in the state, he said. Now it’s one of the highest.

“We have got to have a Democratic Party that will be in people’s living rooms and dining rooms, in the coffee shops where people meet,” he said. “If I become DNC chair I am going to prioritize turnout. Not just in presidential years but in midterms, state and local elections.”

In the end, though, Ellison’s Farrakhan association may prove to be a potent argument against his DNC bid. The reason is that, regardless of the accusation’s merits or lack of them, the charge of anti-Semitism has an indelible resonance, especially among Jewish listeners. The facts — that it was a brief, indirect association, it happened 20 years ago and he publicly repudiated it and expressed regret — don’t make much of a difference. It’s hard to recover from an accusation of anti-Semitism. Jewish listeners don’t forget, and too often, they don’t forgive.

Keith Ellison Vows To Give Democrats Their Groove Back — Will Louis Farrakhan Haunt Him?