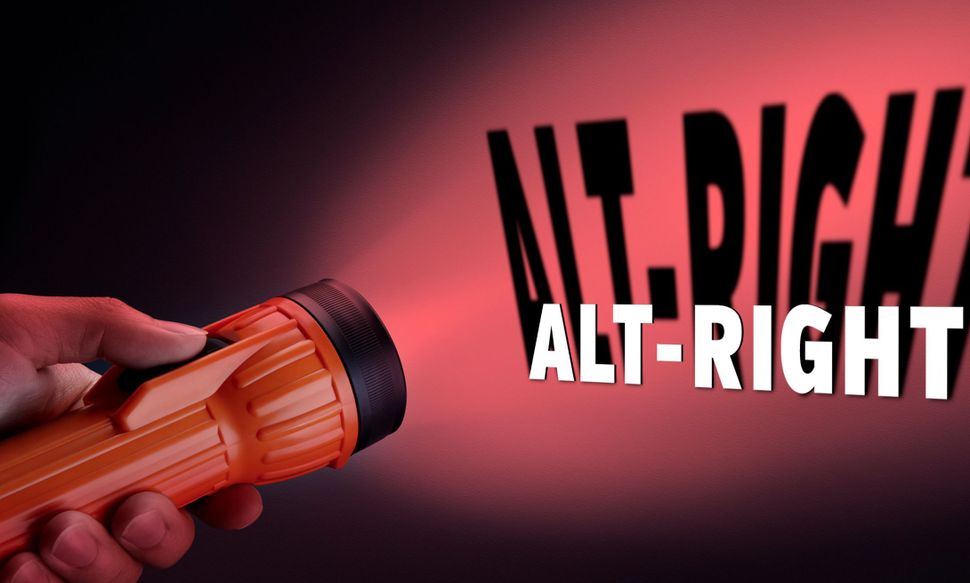 The “alt-right” has become thinking America’s bogeyman. I’m not the only one who is scared.

Scared of the swift way that this grab bag collection of white nationalists has morphed from a fringe movement largely confined to the internet to a group whose latest annual conference drew significant news coverage.

Scared of its encroachment into the halls of power, particularly with the White House appointment of Steve Bannon, who cleverly provided a welcome platform on Breitbart News for the “alt-right” even if he denies his own support.

Scared of the way these ideas — that America is only great when native born white men are dominant politically, economically, culturally and religiously — are tiptoeing into the mainstream, gaining legitimacy, lurking within striking distance of the Oval Office.

I’ll admit that some of my fears are contradictory. I’m scared that we’re paying too much attention to a radical sliver of the right that may only consist of a minuscule number of Americans and a bunch of mercenaries banging out nasty stuff on their computers someplace in Russia or Macedonia or wherever.

And yet I’m also scared that if we don’t pay attention, we will feel like the German Jews in the 1930s, who were sure that their beloved country would never empower its worst instincts — until it did.

Personally, I detest the Nazi analogy, even if some on the “alt-right” aspire to the comparison. It depreciates the true horror of Nazism and isn’t worthy of America. But when Richard Spencer ended his keynote address at a recent white nationalist conference with words that sounded eerily Hitlerian — “Hail Trump. Hail our people. Hail victory.” — and many in the crowd gave a Nazi salute, well, I am certain I was not the only one who shuddered. You don’t have to be paranoid to be legitimately worried.

It’s normalization we fear. We’re afraid that the racist, sexist, anti-immigrant, anti-Muslim, anti-Semitic pronouncements and policies of the “alt-right” will become part of acceptable speech and democratic deliberation. That is, after all, their aim. “What are we fighting for is a ‘new normal,’ a moral consensus we insist upon,” Spencer said, moments before the Nazi salute.

But while fear is understandable, it’s not the correct response. It is not the most useful way to isolate ugliness. It is neither healthy nor strategically wise.

So let’s not go there! Let’s not allow fear to exaggerate the threat and distract from the real task, which is to effectively counter normalization, to put these nasty folks in their ever-narrowing place and shut them out of the national conversation.

All the talk in mainstream media organizations about more precisely defining “alt-right” and striving to put the term into context is a fine thing, especially because an easy label can belie a group’s underlying, more dangerous intentions. The A.P.’s new guidelines, for instance, direct journalists not to use the term without defining it because “it is not well known and the term may exist primarily as a public relations device to make its supporters’ actual beliefs less clear and more acceptable to a broader audience.”

I am all in favor of nuance and context, but unfortunately, such values get lost in our 140-character publishing landscape. “White nationalism” — the belief that American national identity should be built around white ethnicity — is a feasible shorthand, but experts say even that term doesn’t correctly reflect all the attributes of the “alt-right.” Its overt misogyny, for one.

Nonetheless, it would be a mistake to get hung up on semantics. Words matter, of course. The ideas behind those words matter even more. Calling the “alt-right” by another name is not going to make it go away. As Julian Sanchez, a senior fellow at the Cato Institute, wrote recently in the Washington Post, “If you’re worried about the gradual mainstreaming of the ‘alt-right,’ in short, stop fussing about what to call it. Think about how to stop it.”

A good place to start is to understand what it wants. Beyond the rag tag hangers-on to this amorphous movement is a genuine ideology detailing what its adherents believe ails America and a prescription to address it. Electing Donald Trump was first on the list. Now the question is whether the president-elect will actually carry through on the promises he made that lit up the “alt-right” in his contentious campaign.

They are waiting for mass deportations of undocumented immigrants and a ban on Muslim immigration. As Zack Beauchamp wrote Monday in Vox, the “alt-right” wants Trump to usher in “a new, racially polarized discourse in which openly racist arguments once again become acceptable to make.” Stop or curtail implementation of these policies and this discourse, and you curtail the “alt-right.”

That this is a difficult task with a Republican Congress and an angry electorate goes without saying. But for precisely that reason, fear must give way to a confident, concerted effort to reclaim the mainstream and push back on the attempted invasion of the “alt-right.” Really, who is stronger here?

Remember that a bogeyman is a person or thing widely regarded as an object of fear, typically designed to frighten children. When it comes to the “alt-right” in America, I certainly don’t want to act like the child.