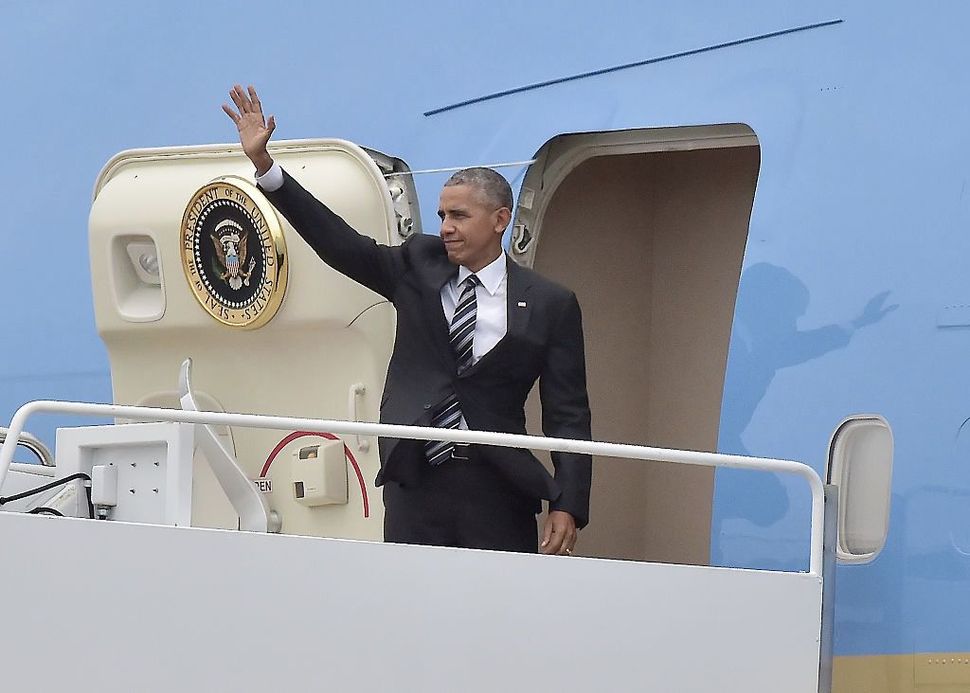 As his administration draws to a close, many have wondered whether the president will seek to lay down a permanent marker on the Israeli-Palestinian conflict before President-Elect Donald Trump assumes control in January. In fact, two days ago in the The New York Times, former President Jimmy Carter urged Obama to recognize the state of Palestine and support its full entry into the United Nations.

As Carter notes, early in Obama’s tenure, the president announced that resolving the Israeli-Palestinian conflict would be a primary objective and a centerpiece of his diplomacy. However, President Obama’s early missteps should be a lesson to him as he leaves office. A last-ditch effort in Middle East peacemaking would be the wrong play to call in the final minutes of his term in office.

Recall President Obama’s early insistence in 2009 for a complete freeze of Israeli settlement construction before negotiations. That produced a series of unintended consequences that undermined peacemaking and led to a new Palestinian condition for even sitting at the table with their Israeli counterparts: a complete settlement freeze. This tactic has resulted in a lasting stalemate in Middle East negotiations.

A last-minute diplomatic action that, for instance, focuses on settlements alone inevitably will lead to a similar result. Ramallah will continue to resist any flexibility in its positions so long as American pressure can be counted on to “deliver” Israeli concessions without demanding the Palestinian Authority make its own set of difficult choices. Any diplomacy that places the entire onus on Israel for changing the status quo both fails to account for the full complexity of the conflict and will further strengthen Palestinian intransigence.

This has prompted the Palestinian Authority to downplay negotiations and prioritize internationalism, an effort to use multilateral institutions like the United Nations to delegitimize Israel and engage the country in the courtroom rather the negotiating table.

In the latest example of this destructive campaign of delegitimization, the Palestinian Authority recently has pursued an effort to undo the 100-year-old Balfour Declaration rather than to end the 100-year-old conflict and encouraged the passage of a recent UNESCO resolution denying the historic reality of the connection of the Jewish people to holy sites in Jerusalem.

Moreover, unilateral moves undermine the confidence the Israeli public has in the peace process, yet their trust is crucial to achieve long-term success. Any initiative that would further convince the Israeli public that the American government – its greatest ally – primarily blames the Jewish state for the absence of peace is bound to fail.

Such a notion stands in complete opposition to what Israelis see when the Palestinians embrace delegitimization over negotiations or what they read between the lines in the comments of numerous Palestinian leaders: that Palestinian rejection of their very right to exist lies at the heart of the dispute.

In his remaining days, the key question for the Obama White House should be whether any action—whether a speech, unilateral recognition, or a U.N. resolution—will make it more or less difficult for the next president to continue peacemaking, since a meaningful renewal of the process is impossible before Inauguration Day.

Would such an action elevate the U.S. as an honest broker or tip the scales in favor of either party? Would it convince the Palestinian leadership that only direct negotiations with Israel can achieve their national aspirations? Would it convince Israeli leadership that the U.S. can be counted on to address its legitimate security concerns even as it is forced to consider territorial compromise? Would it somehow change the persistent obstacle of Palestinian resistance to recognizing any Jewish connection to the land of Israel and the legitimacy of the Jewish state?

These are difficult questions, but the evidence suggests that any last-minute U.S. initiative likely will create more harm than good in advancing the peace process.

Among all the nations in the world, the U.S. still has the singular potential to get the parties back to the negotiating table. This could be particularly true if we can harness our history and maximize our mantle as an honest broker. The new dynamics of coordination and collaboration between Israel and its Sunni Arab neighbors might enable unforeseen possibilities.

However, this will not happen in a U.N. Security Council meeting or be achieved by a single speech. It requires time and the dedicated, painstaking, unglamorous work of rebuilding trust. Regardless of how President Obama and his staff may feel about their successors, this is a task for a new administration, not the last great act of an outgoing president.

In the months before President-Elect Trump is sworn in, President Obama can set the stage for this longer view. If he will permit the next Commander-in-Chief to start with a clean slate, there is an opportunity for President Obama to achieve the reset in the region that he so desired. Such deference could reboot the stalled peace process and best serve the interests of all parties, including even his own legacy.