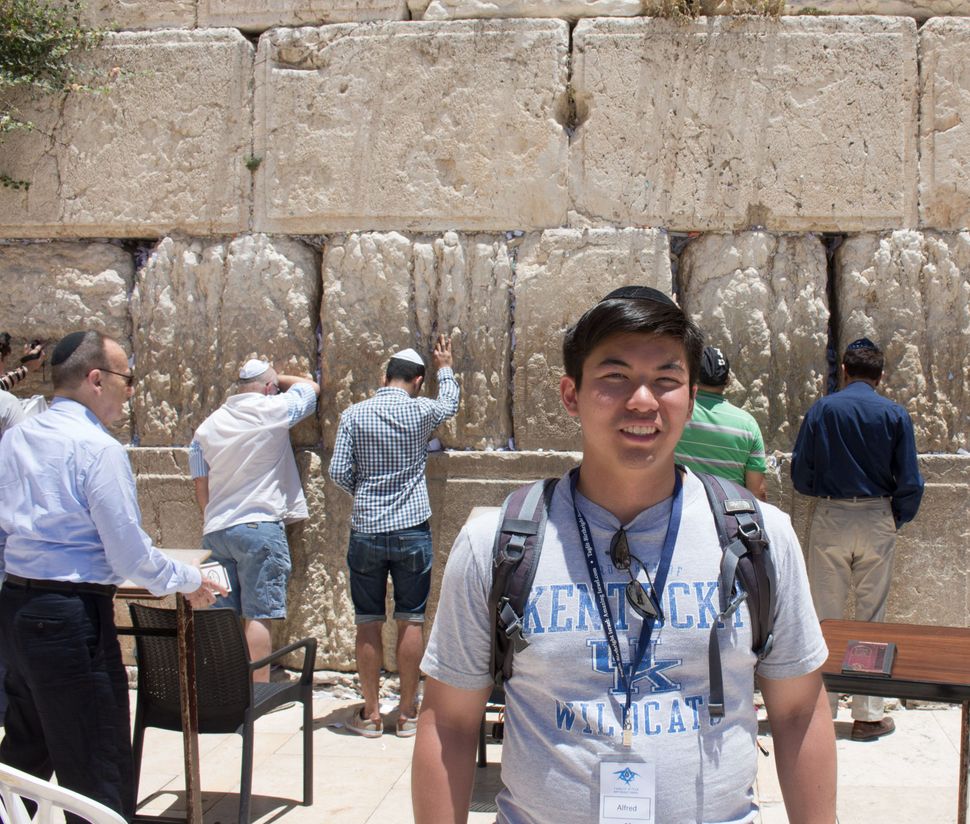 Image by Courtesy of Alfred Miller

If you saw me on the street, you probably wouldn’t peg me as Jewish. With my small eyes, thick black hair and high cheekbones, I’m a Jew with some very Chinese characteristics.

Growing up, I learned from my father that being Jewish — or at least, New York Jewish — mostly involved cultural quirks, like picking the number 18 for luck in Little League and ordering Cel-Ray soda at Katz’s Delicatessen. Despite doing these things, life sometimes got awkward for me among my Jewish brethren because of my appearance.

“These days, you can convert to Judaism,” an older, female member of my local Jewish community center once informed my very Cantonese mother and me, apropos of nothing. “There’s no pressure, though. We don’t proselytize. That’s the good thing about this religion.” And that was indeed good, since we really just wanted to use the gym.

The same happens in reverse. My father has never learned Cantonese, even after nearly 30 years of being married to my very Cantonese Tiger Mom. This is almost certainly to his benefit. I doubt he’d appreciate knowing just how frequently people in Chinatown nickname him gwai lo or “foreign devil.”

When you grow up half-Jewish and half-Chinese, you inevitably develop a nagging sense that you don’t quite belong among your own people. Where, then, did I belong? As I neared adulthood, I resolved to go directly to the sources of these cultures that made up my dual identity and find out.

The Taiwanese government has been subsidizing Birthright-like trips to Taiwan since the 1960s. The trips help Taiwan’s government promote goodwill abroad and help overseas Chinese parents ensure that their children marry in-race, says filmmaker Valerie Soe, who is producing a documentary on the subject titled “Love Boat,” the nickname given to some of these trips.

I thought that perhaps if I immersed myself in Chinese and Taiwanese culture, I’d find my lost tribe there. So, in July 2013, I embarked on one of these trips, purportedly to work on my Mandarin.

The trip I attended brought together more than 100 students who were of either Chinese or Taiwanese descent, and who came from around the world. All between the ages of 18 and 24, we were divided into eight classes depending on our Mandarin proficiency. Americans dominated my class, but there was also a large contingent from France. 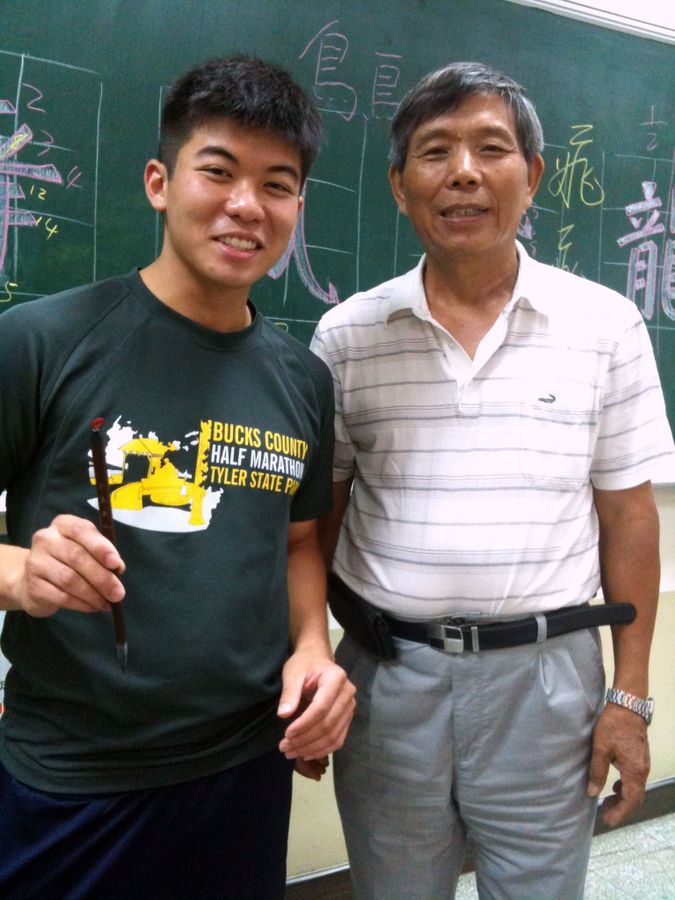 Image by Courtesy of Alfred Miller

In between Mandarin classes, we toured Taiwan and learned the customs that supposedly defined our shared culture. We practiced Chinese calligraphy and painting, learned to do a sequence of kung fu moves in unison, and wrote down our hopes and dreams on the sides of lanterns destined for the sky above Pingxi, a town known for its sky lanterns.

I couldn’t help feeling a little out of place in the program, given my unfamiliarity with many of the activities and the program’s strict demerit system. I quickly racked up demerits for such offenses as doing my laundry after lights-out, which occurred at 10:30 p.m.

Feeling extra rebellious one evening, I found myself strolling through Taipei’s Da’an Park with some members of my class. As the Americans worried whether Taiwan had open-container laws, one of the French students uncorked a bottle of red wine he had purchased at a local 7-Eleven and passed it around. This was the life, he assured me, as he proceeded to light up a cigarette. Simon (the “n” is silent, of course) was the Frenchest Taiwanese guy I’d ever met. And, I suppose, that was his point. The calligraphy and kung fu we were learning were just fine, but nothing compared to “un peu de rouge,” as he referred to the 7-Eleven wine. Simon was both proudly Taiwanese and proudly French, and he dared others to tell him otherwise.

During that month, I didn’t discover any hidden talents for calligraphy or kung fu to prove my Chineseness. I didn’t find love — though I’m shocked by how many of the romances that others developed on that trip have endured (across continents, in some instances!). Rather, in Simon and in others I saw a new way of embracing my dual identity. One task remained: to see just how Jewish my dual identity could be.

In June 2015, I joined a mostly secular Taglit-Birthright Israel trip. Here, too, my trip-mates and I learned the customs and rituals that were said to define our common culture. This time, my hopes and dreams were destined not for the side of a sky lantern, but for a note of prayer to be placed in the Western Wall. We traced the paths of our ancestors on the Jordan River, at the Dead Sea and atop the ancient fortress of Masada.

It was on Masada that those who had never had a bar mitzvah ceremony (like me) were offered the chance to receive one. I declined. While I felt an affinity for Israel and for a religion that seemed to encourage debate, I wasn’t about to profess my faith in front of 39 other Birthright participants I hardly knew, all while holding a giant Israeli flag. I would have felt too exposed.

I was surprised, therefore, to see by far the quietest Birthright participant volunteer for the ceremony. Over the past week, Elliot had maintained an air of mystery, saying little and rarely venturing outside his friend circle. That he was from Queens and that he made a habit of rubbing his face with his hands at odd moments was about all I knew of him.

When he briefly addressed the group before the bar mitzvah ceremony, it was the most I’d ever heard him speak at one time. Elliot explained that he had lost his father when he was young and that his father had been Jewish. Elliot had come to Israel to understand his father’s faith.

We carried on as if Elliot hadn’t just bared his soul to us, but afterward I thanked him for sharing his story. It had brought meaning to a trip that had mostly been an excuse for the other participants to take selfies with camels, hook up with Israeli soldiers and stay up late drinking. I hoped the others appreciated his message. That day, Elliot and I became friends and have remained so since.

While I never did convert to Judaism or get very far with my Chinese calligraphy, I did find in my two journeys the sense of belonging I was seeking. I found it in Simon and Elliot and the other friends I made in Taiwan and Israel. I didn’t need to assimilate into one culture or the other to fill the void I felt. I simply had to embrace my dual identity and not be afraid to risk a little vulnerability in front of others. The friendships that blossomed as a result have become the lost tribe I was looking for all along.

Alfred Miller is a journalist based in New York City. A recovering engineer, he writes about technology, startups and sometimes baseball.