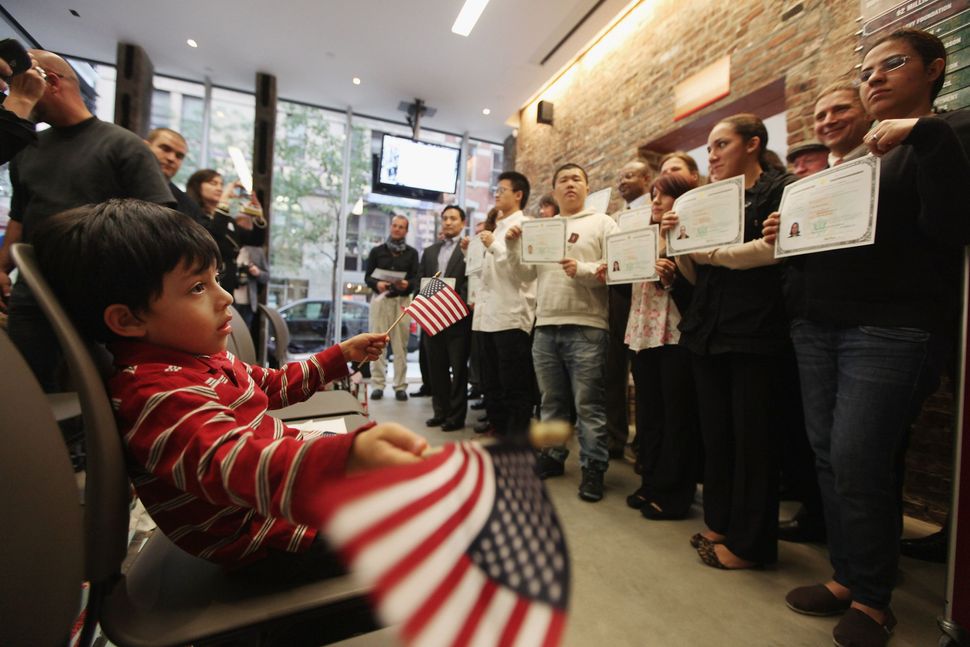 The Tenement Museum hosts a naturalization ceremony on September 20, 2011. Image by Mario Tama

As a trustee of the Lower East Side Tenement Museum, I am proud of our 28-year history of celebrating the lives and cultures of immigrants — what brings us together as Americans, not what divides us. This is an apolitical mission; from the museum’s founding, we have neither endorsed a single candidate for public office nor taken a position on legislation.

And yet, recent events have thrust us into the political spotlight. Though we’ve always had the occasional comment on our tours that “It was different back then” or “My family came here legally so it’s okay to trash current immigrants,” there is often a sharper tone to these comments today.

And so my heart sank when I woke up one morning and read the Reuters article titled “At New York Immigration Museum, Guides Cope With Hostile Remarks.”

To those who visit our museum spoiling for a fight, or who pass it over anticipating a political message, I invite you to consider our values.

My Ashkenazi Jewish family began arriving in the U.S. during the twilight of the 19th century. They came from places like Poland, Russia and Latvia. They spoke only Yiddish, no English. They didn’t have jobs lined up or much family to speak of in this country; at least not at first. They must have been excited yet terrified at the prospect of moving to this “land of opportunity.” Did they know that to survive and prosper in this new land they would have to be accepting of other peoples’ cultures? It’s hard to say.

But whether they expected it or not, they certainly embraced America’s possibilities and thrived because of them, not despite them. I believe that part of the reason my family was able to pull itself up, become educated, obtain gainful employment, and become responsible community members, was because of their strong grip on these immigrant values — openness to new experiences, the willingness to learn from everyone around them, and the ability to accommodate differences, whether of language and culture or of political opinion.

Now is the moment to remind ourselves that these values, and the Tenement Museum’s core message, have not changed. No matter the political climate, we must recognize the threads that bind countless American immigration stories, some centuries old and some just beginning. Nearly every American has an immigrant past. What makes these new immigrants so different from your ancestors? As we prepare to open a new exhibit in 2017 exploring more recent stories of immigration, including families from China and migrants from Puerto Rico, these questions come into even sharper focus. I have to wonder where others might draw the line. At what point in the genealogy does “foreignness” creep in?

As an organization, we stand united, dedicated to celebrating the lives of immigrants and the stories of the immigrant experience. Our board, executive team and staff are descendants of immigrants. We are Jewish, Italian, Irish, Latino and Chinese, among others. Regardless of your political beliefs, we believe that, as Americans all, your values match ours. We invite you to join us at the museum for historical context and honest conversation. We’re not afraid of opposing views — we welcome the chance to change your mind.