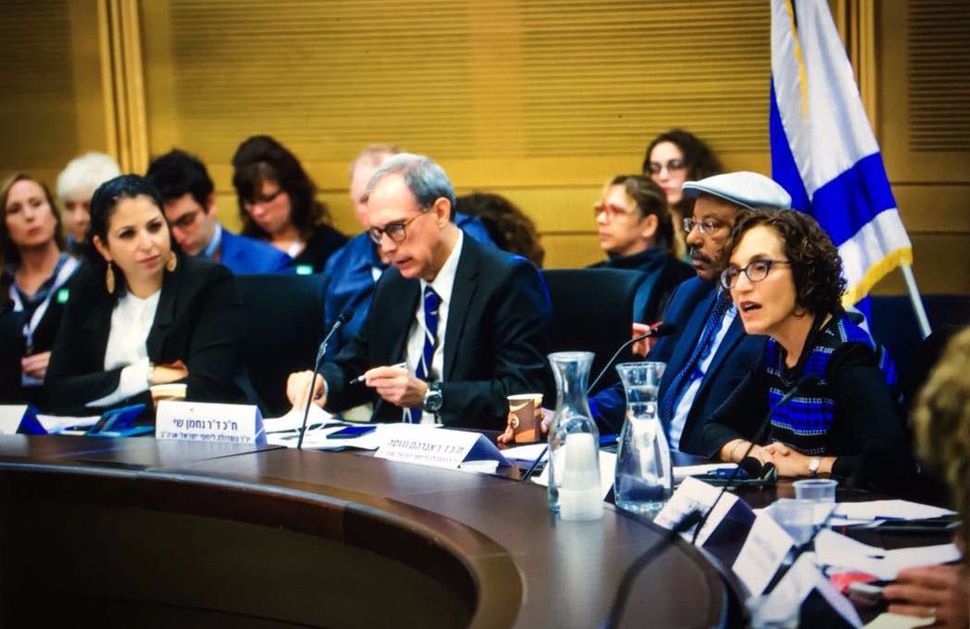 Image by Courtesy of the Ruderman Family Foundation

Jerusalem — Usually I’m the one sitting in the audience or the press section, covering legislative hearings or committee meetings or the endless speeches of lawmakers, hoping someone, somewhere, is listening. In all my years as a journalist, I’ve never been the one asked to speak.

But there I was yesterday, in a paneled committee room at the Knesset, around one of those sweeping circular tables that telegraphs seriousness, wondering whether anyone would listen to me.

And to my surprise, people did.

Why am I telling you this? Because amid all the worry about the yawning disconnect between American Jews and Israel, there are bright spots of dialogue, and the fact that members of the Knesset came to listen to me and others yesterday is proof of that.

Now, it’s true that most of those lawmakers were members of the Zionist Union, the left-wing opposition that sometimes seems lost in the political wilderness, and the one lawmaker there who was a member of the ruling Likud party is considered a renegade on certain issues. Still, I prefer the optimistic view of the proceedings. They came, therefore they cared.

The setting was the Knesset Caucus on Israel-U.S Relations, founded in 2011 with support from the Ruderman Family Foundation. Its chair, Nachman Shai, acknowledged from the start that many American Jews are reeling from the unexpected election of Donald Trump as our next president, and the surge in anti-Semitic rhetoric that accompanied this unusually nasty campaign.

That stands in contrast with how Israeli Jews are reacting to the election — at least according to a poll released yesterday by Ruderman, which showed that 83% believed Trump would be a “pro-Israel” president (whatever that means). And more than half of those polled were either slightly or not at all concerned about the increase in anti-Semitic incidents after the election.

Perhaps those same Israeli Jews needed to hear from Jonathan Greenblatt, CEO and national director of the Anti-Defamation League, who told the caucus of the documented harassment — from the radical left and now, increasingly, the extreme right — unleashed during the campaign. And how the traditional liberal values that have shaped American Jewish politics for a century are now under threat in a Trump administration, on issues including immigration, health care, reproductive rights, public education, economic equality, the separation of religion and state and the very role of government. (That was my contribution.)

It was heartening to hear lawmakers acknowledge that some of the policies and actions of the Israeli government make it harder for American Jews who may be squishy in their support for Israel. “The government is responsible for some of the alienation,” Yossi Yona admitted.

Referencing the continuing moves by Haredi officials to insult and marginalize non-Orthodox Jews, Ksenia Svetlova said she knew what it was like to be oppressed as a Jew in her native Russia. “We must not allow anyone to give any other Jew that feeling that you don’t belong here,” she insisted.

And these officials also recognized the challenging fact that views on Israel are diverging between Democrats and Republicans. “It’s a problem that Israel has become a partisan issue,” Ayelet Nahmias-Verbin said. “I apologize that we are not always of good service when it comes to the relationship of Israel and American Jewry.”

I don’t want to imply here that this kind of dialogue was unique or unprecedented. To their credit, many American Jewish organizations have worked for years to bridge the gap in understanding and experience, and Israelis have reciprocated.

But what is unprecedented is American Jewish anxiety over a Trump presidency, and the uncertainty it brings to domestic and foreign policy. Israelis don’t have to share that anxiety — they have their own list of worries — but they should at least acknowledge it. And some are.