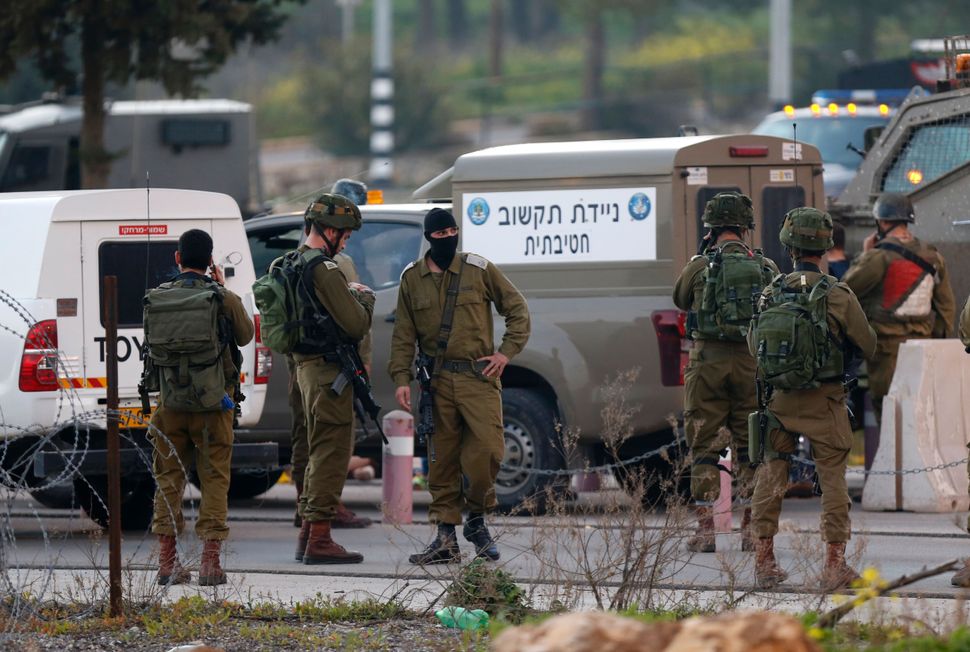 Israeli security forces monitor the area where a Palestinian man tried to stab Israeli soldiers before being shot dead at a checkpoint near Ramallah, in the occupied West Bank, on February 26, 2016. The Israeli army ‘thwarted the attack, firing towards the assailant, resulting in his death,’ it said in a statement. The Palestinian authorities did not immediately announce the identity of the attacker. Israeli media said the attack took place near the Beit El settlement outside Ramallah. / AFP / ABBAS MOMANI (Photo credit should read ABBAS MOMANI/AFP/Getty Images) Image by GETTY IMAGES

Congratulations on your nomination to be U.S. Ambassador to Israel.

I must say that I was alarmed to hear this news, as your rejection of decades of U.S. policy regarding a two-state solution and your smear of some liberal Jews as kapos should disqualify you from this position. T’ruah, the organization I lead, will marshal the power of our 1,800 rabbis and their communities to block your appointment. In the meantime, we also invite you on an up-close tour of the reality you have helped create through your funding of settlement projects.

As you may know, T’ruah partners with Breaking the Silence, an organization of Israeli veterans, to bring synagogue groups, rabbis, and rabbinical students to see the West Bank through the eyes both of Palestinians and of Israeli soldiers who have risked their lives serving there. For you, though, we would be happy to arrange a private tour.

On our tour, we will see the ways in which the growth of settlements blocks Palestinians from reaching their schools, workplaces, and families. We’ll learn about the different systems of law under which Israelis and Palestinians in the West Bank live.

In practical terms, that means that the teenager from Beit El — the settlement you support—who was arrested in October for attacking Palestinians from a nearby village has been released to his parents until trial, and will be tried in a civil system in which only 7.4% of investigations lead to indictments. Meanwhile, a Palestinian teen accused of throwing stones would go through the military court system, which has a 99% conviction rate, and would be separated from his parents for the length of the trial. That Beit El teen, by the way, is the same one who, a few years ago, was sentenced to three months of community service for burning down a Palestinian family’s home.

To drive to Beit El, of course, we’ll take the Israeli roads. As you have said, “it’s an easy drive from Jerusalem” — and one can do so without crossing through any Palestinian towns. So we’ll have to go off-road a bit if we want to meet some of the families from Dura al-Qara whose private land was stolen to make room for Beit El, sometimes by fraud, including the plot where the building named after you stands.

Don’t be surprised if these families seem angry, or if they doubt the possibility of peace. We’re committed to peace —and hope you will be too—but understand that the theft of land for the purpose of expanding settlements causes Palestinians to doubt Israelis’ intentions.

We won’t only speak to Palestinians, though. We’ll also hear from Israeli army veterans who have risked their lives — and lost friends and family members — to protect an occupation that threatens the very future of the Israel you claim to love.

It probably feels good to sit in the comfort of your Long Island living room and send money to expand Beit El. But your children weren’t among the Israeli soldiers and police officers who faced Beit El settlers throwing rocks and burning tires during last year’s demolition of two illegal buildings there. Nor were they among the soldiers who withstood a 2011 “price tag” attack on their army base near Beit El that threatened lives and damaged military equipment.

Your children are also not among those who risk their lives to defend the Israeli settlers who choose to live inside the West Bank, or among Israelis dependent on social service systems that allocate disproportionate shekels to these settlers. Perhaps hearing from some of these soldiers will make you question whether it’s worth risking human lives — including Jewish lives — for the sake of a few buildings.

The success of the U.S. as an ally and arbiter in the Middle East depends on our impartiality. The prospects for a peaceful resolution of the ongoing conflict rest on your shoulders. Since you’ll be the first person in your position in many years without academic expertise in the region, I recommend that you start by getting to know the area in its fullness. Only when all parties view you as having listened openly to their grievances might you be trusted to advance our shared hopes for peace, justice, and security for both Israelis and Palestinians.

Rabbi Jill Jacobs is the Executive Director of T’ruah: The Rabbinic Call for Human Rights.