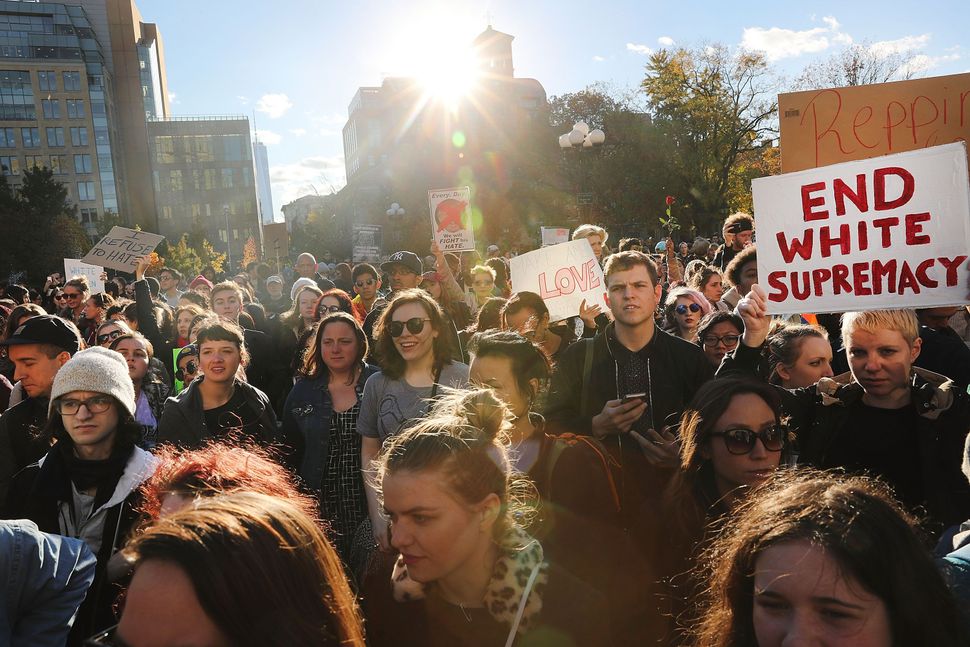 In the communities I sing and pray with, Hanukkah is all about light, freedom and hope. Not so much about war. That was the choice of the ancient rabbis too. Instead of writing about the Maccabees’ war against the Hellenists, the Talmud chose to tell us only one thing: there was a miracle when oil enough for one day burned for eight. “Not by might and not by power but by My spirit” (Zechariah 4) was the text the rabbis chose for us to read in shul on Hanukkah. They were just as tendentious as we are.

In contrast, it has been Zionism’s choice to reemphasize the Maccabees’ militant struggle. But the American Jewish community has stayed firmly wed to the theme of religious freedom. It sells well here, it fits right in with liberal American values, and it doesn’t divide the right from the left.

Soon we will have a president who has promised to undermine religious freedom along with freedom of the press. And we have a neo-fascist “alt right” movement that has been given social permission and prominence by backing his election. I’ve heard about more anti-Jewish attacks in the U.S. since Trump’s election under two months ago than I heard about my entire life prior to the election. It’s not just the magnifying effect of Facebook. Just this week, a synagogue in Santa Monica was vandalized with excrement, and white supremacists are devising a march with rifles in hand on a Jewish community in Montana.

A lot of Jews don’t seem too troubled that it’s Trump who is dragging these people into the open, as long as this next president is best buds with Netanyahu. The Zionist Organization of America is in love with the new regime: a president willing to support any actions Israel takes, no matter how undemocratic, while stoking fascism in the U.S. An Israeli ambassador-elect who called Jews kapos for supporting the goal of two states for Israel and Palestine. An American Jewry becoming more and more scared.

The worry, for me, is that the last shift is the one that’s most helpful for the Zionist right, because a scared Jewish community here in the U.S. means people will care less about Israel’s actions, as long as it remains a safe haven for them. It’s a right-wing Zionist’s dream.

If that’s how we roll, extremists will win, meaning they will end democracy in Israel and weaken democracy here. Many right-wing Jews, whether extremist or not, are already working hard to normalize Trump. Dennis Prager, who makes his living being a moral scold, dismisses Trump’s manifest ethical failings. Malcolm Honlein, head of the Conference of Presidents of Major Jewish Organizations, co-sponsors a Hanukkah party in the Trump D.C. hotel because “it’s closest to the White House.” (Correct translation: it’s the easiest way to throw a bone to the White House’s incoming resident.) No surprise there: the right has worked hard for years to normalize fascist-leaning elements in Israel, too. If we want to know who the kapos are, we can readily see who is ready to dance with the enemy.

If I have to listen to right-wingers, I’d rather listen to someone honest, like Zeev Jabotinsky, the founder of Revisionist Zionism. Jabotinsky never drooled on about “a land without a people for a people without a land.” Rather, he spoke about building an “iron wall” of military defense to protect Palestinian Jewish communities. According to Jabotinsky, only an immensely superior force could compel Arabs or anyone else to accept the occupation of their country.

I know Jabotinsky’s politics were dangerous, and it’s going to make my friends’ heads spin to see me quote him. But so much of Jabotinsky’s shock value comes from his candor about how Israel would affect the Arabs of Palestine. He recognized that achieving Jewish aspirations meant carrying out an occupation — something contemporary apologists for the settlements think they can hide by not using the O-word.

Jabotinsky also adamantly opposed expelling Arabs from Israel. Yes, he loved a wall, but it was a metaphorical wall, not a physical one like the wall of Trump’s speeches. Jabotinsky thought Jews should have the will and means to defend Jewish communities against attack. As he said, “Better to have a gun and not need it, than to not have a gun and need it.”

We ought to listen carefully to Jabotinsky’s words. It’s no joke to say we need to build an iron wall today, to stop even the first steps to fascism in the U.S.

I don’t mean that progressives should all go out and buy guns. But we can’t let the right monopolize the idea of self-defense, when they are the ones flirting with danger. The neo-fascists who dream of race war are typically cowards with weak identities. We want them to be scared of us. Jews can’t project who we need to be in the face of fascism, if we only have the refuge of Israel and the skill set of the ADL to fall back on. Love and solidarity can accomplish a lot, and we need both. But Trump has released a malevolent genie, and we need to be ready to force it back into hiding, by any means necessary.

I have to admit, this isn’t the first time I’ve thought about this. After the 1994 massacre in Hebron, I was organizing vigils against extremist Jewish violence in New York. At one of those vigils, I met a counter-protester, Mordechai Levy of the Jewish Defense Organization.

Levy and I had many spirited conversations over a series of political events. What struck me was that he combined talk about attacking fascists with vehement rejection of racism. Sort of the inverse of the Jewish Defense League, which combined violence with passionate racism and fascism. After much cajoling from Mordechai, I attended a gun training. I didn’t learn how to shoot in one session, but I stopped being afraid to learn.

Now may be the time to do so. It’s better to know how to shoot a gun and not need to, than to need to shoot a gun and not know how, to amend Jabotinsky. That aligns with another of his slogans: “Jewish youth, learn to shoot!” Whatever tools we use, we need to be able to defend synagogues, communities and Jews against attack, and we need to be ready to defend others too, including Muslims and mosques.

In the American version of Hanukkah, we celebrate the earliest recorded revolution for religious freedom, even as we wishfully forget the Maccabees’ own war crimes and corruption. My own Hanukkah has always been about cherishing the darkness of winter. But maybe we need to keep in mind the Israeli Hanukkah too, and remember that self-defense is a mitzvah. And defense of the land against fascism — the land of America and the land of Israel — is a greater mitzvah, because it means defending our neighbors and civilization along with ourselves. Responding with love must be a first line of defense, but it can’t be the last line. Does that mean learning to shoot? Maybe for some. But here’s what it does mean: not compromising, not normalizing.

Forms of fascism in Israel are being strengthened by the rise of fascistic elements in the U.S., and vice versa, irrespective of the fact that anti-Arab sentiment can seem at odds with anti-Jewish sentiment. The actions of both David Friedman and Steve Bannon will clear the way for worse elements to seize the stage. Their aim is the same: to destroy the middle. We don’t need to be holding a gun to take aim back.

Rabbi David Seidenberg is the creator of neohasid.org and the author of “Kabbalah and Ecology: God’s Image in the More-Than-Human World” (Cambridge, 2015).

This article was updated on January 5 to show that a paraphrase of Jabotinsky was not a quotation.