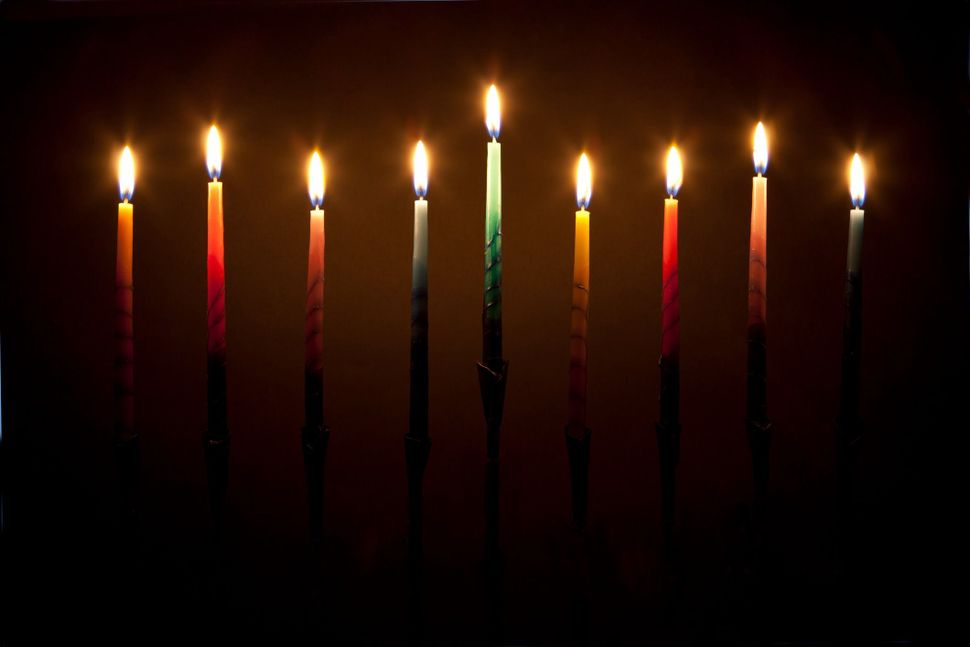 Let your Hanukkah misconceptions melt away Image by iStock

If you don’t know your Hasmoneans from your Seleucids, read on. After all, a great miracle happened here! I mean there.

The correct way to spell the name of the Festival of Lights is to write it in Hebrew. The fact is, it’s a word transliterated from another language, and anyone who claims to know the right way to spell it needs to find some hobbies. Unlike other Hebrew-derived words, like “gabbai” and “genizah,” that apparently have such standardized spellings that they have appeared in the Scripps Spelling Bee, this word is especially difficult to transliterate and causes some drama around whether that sexy back-of-the-throat hacking sound should show up in the spelling. The Forward favors “Hanukkah,” but we’re not going to force you to do anything. (Unlike Antiochus IV Epiphanes! Stay tuned.)

Is Hanukkah in the Torah?

I’m glad you asked! Hanukkah is not anywhere in the Torah or the Tanach, the Scriptures. There is a book called “Maccabees I” that, written in the second-century BCE, tells the story that we now more or less consider to be “The Story of Hanukkah” (Jews revolt against religious persecution). “Maccabees I” has a sequel (cleverly titled “Maccabees II”) that, written years later, tells a slightly different story (Jews reject the other Jews who have assimilated). Hanukkah is mentioned briefly in the Mishnah and the Talmud, and the rest is (hotly contested) history.

Who Were the Hanukkah Story’s Bad Guys?

Greeks. Romans. Syrians. Assyrian-Greeks. These are just a smattering of the names I have heard given to the Hanukkah-era assimilation villains. The confusion, my friends, is nothing to blame yourselves for (unless you ever make it again after reading this article.)

When Alexander the Great (a Macedonian) captured Judah in 332 BCE, he set about Hellenizing things, but when he died his empire broke up, and Judea (the name got Hellenized, too) was disputed territory until it was conquered by — the Seleucids! Yep, the Seleucid Empire emerged in the wake of Alexander the Great’s death. The rulers were Macedonian Hellenists who conquered Syria (so they are often called Syrians). The Seleucids allowed Jews a lot of freedom, but also spread Hellenism like gentrification in Brooklyn. By the time Antiochus IV Epiphanes decided to outlaw Judaism and sacrifice pigs in the temple (according to “Maccabees I”), many Jews were more than happy to trade circumcision for public wrestling matches. But not everyone…

So What Actually Happened?

In 167 BCE in Modi’in (still a city in modern Israel!), a man named Mattathias and his family led a revolt against the Seleucids. Mattathias’s son Judah led the rebels in a guerrilla war using their superior knowledge of the land and their fearless perseverance, earning the name “Maccabee,” “hammer.” One truth you won’t hear in Hebrew school is that Jews actually fought on both sides. The war stretched on several years, and ended with the battered Seleucids retreating and the Hasmoneans (Judah & Co.) gaining independence and rededicating the Temple. This began a 200-year period of Jews having autonomous control over Judea, which wouldn’t happen again until a little year we like to call 1948. (Ironically, the Hasmoneans later forced religion on unwilling subjects, but there are no Hanukkah songs about that.)

So, What About the Oil Miracle?

You may want to sit down for this, or you may want to lie down, if that’s how your existential crises usually go. The oil story is truly the tooth fairy/Santa Claus of Judaism, I am sorry to say.

The Maccabee revolt is a historically documented event. And nowhere in the early sources that describe Hanukkah does anyone say anything about miracle oil. Only in the Talmud, written hundreds of years later, does a single paragraph tell the oil story. So while the Hanukkah tale is a historical story, and the miracles of the Torah are religious stories, the oil miracle is not historical, and it does not carry the spiritual weight of a Torah miracle.

I’m not here to drop boiling oil on your Hanukkah party, just to say that there is a distinction to be made between miracles like the splitting of the Red Sea, which we celebrate on Passover (recorded in the Torah), and the miracle of the oil that we celebrate on Hanukkah (dashed off by talmudic rabbis hundreds of years later, possibly because they didn’t want Hanukkah to be a celebration of military miracles alone).

However, while the oil miracle may or may not have happened, the Maccabees definitely concluded their victory by murdering Jews who had become Hellenized! So that’s a fun fact.

Hanukkiah vs. Menorah: Let’s Settle This

Friends, Seleucids and countrymen, it is time that we get on the same page about this.

In the Torah, God instructs Moses to build a six-branch “lamp-stand of pure gold,” which becomes the first menorah. It was lit ritually in the mishkan, the portable prayer space, and then later in the Temple in Jerusalem.

That’s right, my friends, the menorah is not a Hanukkah object. We all have to deal with this hard truth together.

So when the Hasmoneans burst back into the desecrated Temple, they wanted to “dedicate” it (“Hanukkah” means “dedication”) by lighting the six-branched menorah, but, according to the Talmud legend, the oil was supposed to last for only one day. It lasted for eight, so now we light an eight-branch hanukkiah to commemorate it.

But — once again, this tradition reflects the Talmud’s oil fairy-tale story. “Maccabees II” says that Hanukkah is actually eight days long because Maccabees had to make up for missing Sukkot while they were fighting. Still. On Hanukkah, light a hanukkiah. It’s easy to remember.

What’s the Deal With the Letters on Dreidels?

Is Hanukkah Just the Jewish Christmas?

No. Jews have given gelt (Yiddish for “coins”) on Hanukkah for several hundred years. Historians think the practice originated in Europe, as a way to thank teachers, and eventually that turned into children getting a few coins as a gift. Then, as Jewish life in America developed alongside Christmas traditions, Jews began giving on Hanukkah the gifts they would have once given on Purim.

So Jewish Kids Basically Get Christmas for Eight Days?

The idea that Jewish kids get eight times the presents of their Christian peers has a whiff of anti-Semitism about it, does it not? I have never once heard of this happening to any child. Parents more likely parcel out family presents slowly over eight days, or give small nightly presents, like a book or candy.

Did the Maccabees Eat Latkes?

Based on the talmudic verse, the Hanukkah tradition is to eat any fried foods, not specifically latkes. Sufganiyot, jelly doughnuts, are just as good. Falafel and fried green olives and deep fried turkey are just as good, if you use olive oil (though Eastern European Jews usually used schmaltz, and vegetable oil works best, just saying.) The earliest latkes were made out of cheese, to remember Judith, a Hanukkah-era Jewish heroine who talked her way into an enemy general’s home and then casually sliced off his head. Judith (who has her own book, also not in the Tanach) apparently kept kosher so carefully that she ate only dairy foods, hence blissfully fried cheese pancakes. When potatoes took off in Europe, Jews modified the latke.

Is Hanukkah a Religiously Significant Holiday?

People get shockingly smug about this! No, Hanukkah is not a biblical holiday, but it still matters. Hanukkah is a rabbinic holiday, so it’s just not on the same footing as Passover, Sukkot, Shavuot and the High Holidays, all of which are mandated by God in the Torah. But the major cultural significance that we have given Hanukkah, the historic feat of defeating tyranny and gaining autonomy, and the (however controversial) miracles, makes the holiday significant. Don’t let anyone tell you you’re celebrating a Christmas rip-off.

Why Are There No Good Hanukkah Songs?