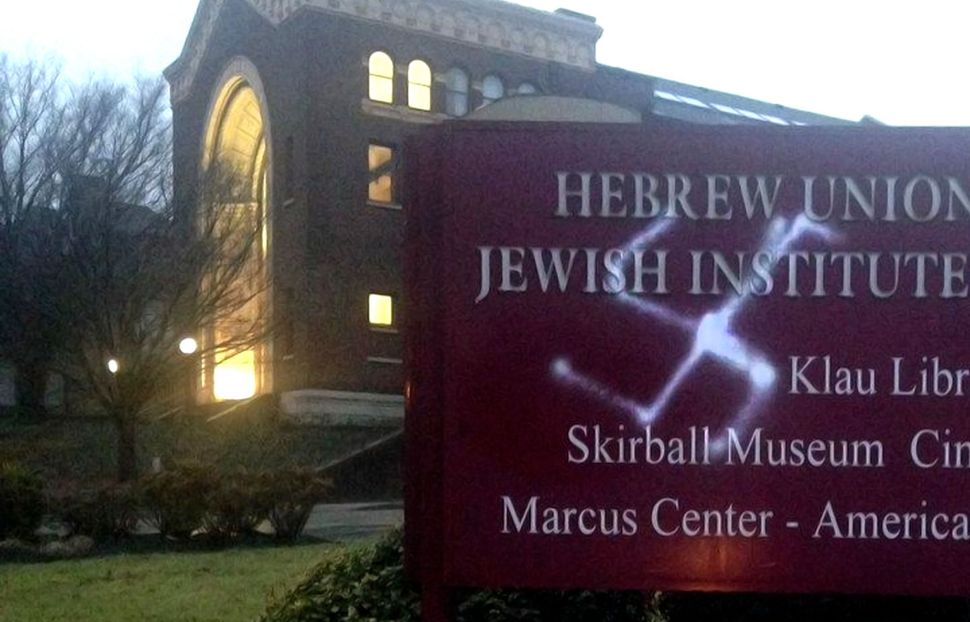 One morning in early January, the students and faculty of Hebrew Union College – Jewish Institute of Religion’s Cincinnati campus, the longtime seat of Reform Judaism in America, woke up to find themselves victims of anti-Semitism. A large, white swastika had been scrawled on the seminary’s red entrance sign. You couldn’t miss it.

Though traumatic for the Reform community, and especially for the generations of Reform rabbis who trained on the Cincinnati campus (there are three other HUC-JIR campuses, in Los Angeles, New York City and Jerusalem, respectively) the swastika was not, given the current political climate, that surprising.

Nationally, Jewish communities from Whitefish, Montana, to Charleston, South Carolina, are under attack, at the mercy of anti-Semites emboldened by Donald Trump’s unwillingness to fully denounce the extremists who traffic such tropes in his name. But this particular act had a special message for Reform Jews.

Reform Judaism, the largest denomination in America, emerged from the crucible of post-emancipation Germany; it has always been shaped, guided and defined by a deep desire to acculturate, to be of the culture and nation in which it finds itself.

For the earliest Reformers, this meant living as both German and Jewish, eating shellfish and pork, and praying in the vernacular (German) as well as in Hebrew. For later generations it has meant identifying as both American and Jewish, and abandoning the signifiers of otherness (yarmulkes, prayer shawls, speaking Yiddish, and even shuckling during prayer). Today it means welcoming interfaith families, and being open and inclusive to Jews of all backgrounds and levels of observance.

Reform Jews of my generation, especially, who grew up in the movement’s youth groups, nearly all remember small group discussions at conclaves and Shabbatons where we were asked to define ourselves as Jewish Americans or American Jews and explain our choice. Our counselors, rabbis and communities never doubted that the two could comfortably coexist, that we saw ourselves as hyphenated, and no one was judged for putting America first.

For years, more than any other Jewish community in America, we have thought of ourselves as fully and easily acculturated, willing to suffer the sarcasm and slights of Conservative and Orthodox colleagues who, jokingly or not, refer to us as non-Jews, Christians or Judaism-lite.

Anti-Semites, of course, have never made such distinctions. In the minds of bigots, a Reform Jew – even an intermarried and bacon-eating Reform Jew — is no different than a Conservative Jew, and one’s level of observance makes no difference whatsoever.

We are all suspect. We are all Jews. We may, in our comfortable acculturation, temporarily forget such truths, but it’s important to remember that this was not always the case.

It was, after all, the administration of Hebrew Union College (Cincinnati) that saved Abraham Joshua Heschel from Nazi Europe at the beginning of World War II, and rescued countless other Jewish scholars of all religious backgrounds from Hitler’s camps.

On some level, they knew, just as we have always known, that we are all Jews, and in times like these, we need each other more than ever, no matter how much we may disagree.