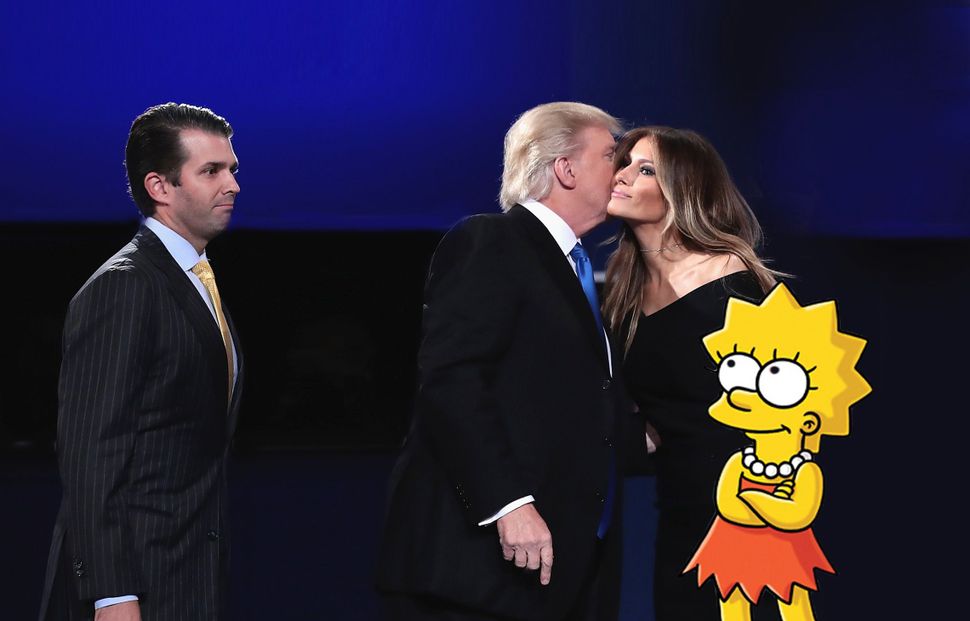 What if famous cartoon doofus Homer Simpson, by some stroke of fate, became mayor of his fictional town of Springfield? The character, known for his harebrained schemes and for his reliance on dumb luck to get by, isn’t based on any real-life personalities, though lately a certain politician has brought him to mind. What would it look like to have such an oaf wield such power? We are, unfortunately, about to find out, on a much bigger scale, as Donald Trump takes office as president of the United States.

Given that catastrophic political situation, which close adviser from Homer Simpson’s inner circle would best serve Springfield’s residents? Most viewers would choose his brainy, kind and empathetic daughter, Lisa, whose real-life equivalent is Trump’s eldest daughter, Ivanka Trump. Poised, well spoken and thoughtful, Ivanka can exert a steadying influence on her father. Few are able to calm down Homer or the Donald but, like Lisa can calm her dad, Ivanka Trump can pacify hers.

In a profile for Politico Magazine of the relationship between the father-daughter pair, Michael Krause writes:

And so throughout this campaign, as she urged him to be more “presidential,” as she got him to ease comments about defunding Planned Parenthood, as she convinced him to stop attacking the American-born judge on the Trump University lawsuit due to his Mexican heritage, as she contributed to the ouster of the more bellicose former campaign manager Corey Lewandowski in an effort to professionalize the overall effort, as her influence only has increased, she also has become her father’s most ardent defender.

Her influence is both direct and through her husband. In an early scandal, when Lewandowski grabbed Breitbart reporter Michelle Fields, it was reportedly Ivanka who had Lewandowski axed from the campaign. While possibly for the wrong reasons (Chris Christie had a hand in Jared Kushner’s father’s imprisonment), it appears that Kushner had enough sway in his father-in-law’s transition to sideline the New Jersey governor, one of Trump’s earliest and most prominent supporters. During the election, Kushner was both a conciliatory and a savvy adviser to his father-in-law’s campaign, impressing even “seasoned campaign veterans,” according to a report by ABC News.

For many observers from the right, the most worrying part of a Trump administration remains how fast a mistake from a commander in chief with little or no foreign policy experience could spiral out of control into an actual conflict. In a September piece for USA Today, conservative foreign policy and military expert Max Boot wrote:

Trump… has made no effort to educate himself about the requirements of being commander in chief. He sounds as ignorant and deluded today as he did when he started running for the presidency. Only now, he is a lot closer to having life-and-death power over hundreds of millions of people.

But while Ivanka Trump’s presence at her father’s first meeting with a foreign dignitary raised eyebrows, especially given the business considerations in discussion, it is comforting that at least one level head was present in the room. In the Politico Magazine profile of the pair, Krause quoted a business associate on the dichotomy between the Trumps’ personalities: “Where he trusts his gut, she trusts a thoughtful, deliberate process.”

Days after the election, in the family’s first post-election interview, Ivanka Trump was asked on “60 Minutes” if she planned to work in any capacity in her father’s incoming administration. She answered: “I’m going to be a daughter. But I’ve said throughout the campaign that I am very passionate about certain issues. And that I want to fight for them. So you know there’re a lot of things that I feel deeply, strongly about. But not in a formal administrative capacity.”

Elsewhere in the interview, it was made clear that all three adult Trump children would stay in New York City in order to take care of the family business. For Donald Trump’s two adult sons, Eric and Donald Jr., that is still the case, but it appears plans have changed in the past few months when it comes to Ivanka and her husband.

Earlier this month it was announced that Kushner would be appointed in a formal capacity to his father-in-law’s administration, serving as a senior adviser to the president. With the purchase of a new home near the Chabad synagogue in Washington, the entire family will be moving to D.C. Although it is unclear what role Ivanka will play, it’s a fair guess she will, however, serve in some capacity, given her decision to step down from her own business empire recently as well. Earlier this month she wrote of the move on her Facebook page,

“When my father takes office as the 45th president of the United States of America, I will take a formal leave of absence from the Trump Organization and my eponymous apparel and accessories brand. I will no longer be involved with the management or operations of either company…. My brothers will oversee the Trump Organization, and I know that in their capable hands the business will thrive…. My husband, Jared, and I will be moving with our family to Washington, D.C., where Jared will serve as senior adviser to the president…. I plan to take time to settle our three young children into their new home and schools.”

While nepotism concerns are legitimate, both legally speaking as well as in principle, how bad of an idea is it for the couple to work with Donald Trump in a formal administrative capacity, really?

While Ivanka Trump and Jared Kushner are both young and inexperienced in government service, they are, in many ways, the polar opposite of the incoming president. During interviews and in her public face to the world on social media, Ivanka Trump’s image and persona are polished, thoughtful and deliberate. She is a Modern Orthodox Jewish woman with a strong commitment to her family. When you consider her father, a thrice-married philanderer with no discernible religious beliefs, not to mention a penchant for tweeting before even bothering to spell check his thoughts, the two could not be more dissimilar.

Kushner, after the arrest of his father, Charles Kushner, steered the family business to success in the real estate world. While many developers in New York deride the accomplishments of the Trump Organization, which relies on licensing the family name, building failing casinos in New Jersey and creating reality shows, few would do the same with Jared Kushner’s business accomplishments. He and his wife bring to the administration some sorely needed professionalism and, perhaps more important — just like her four-fingered friend Lisa — an ability to rein in dear old Dad.