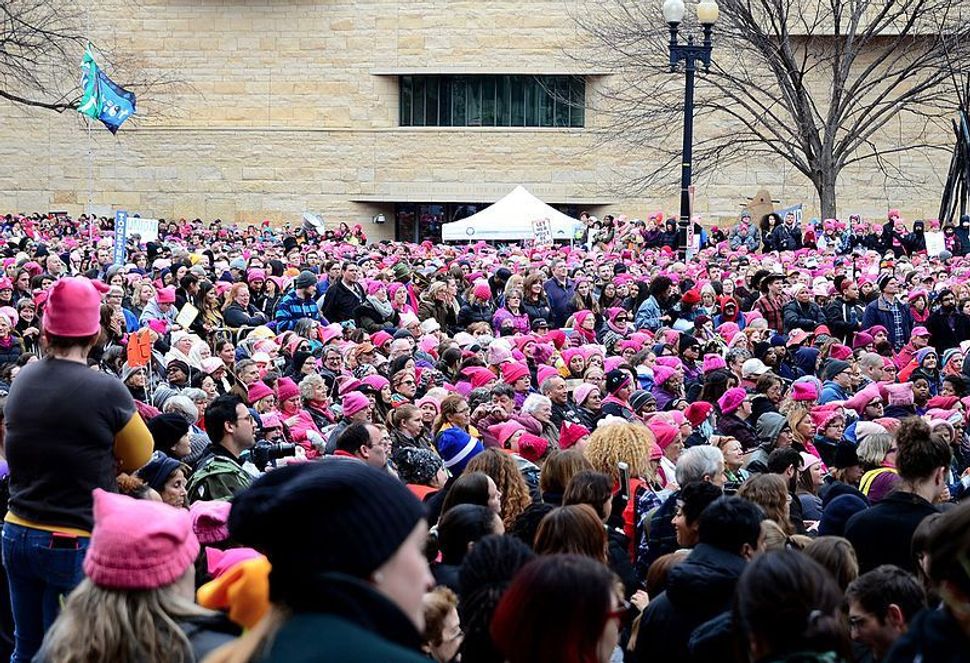 At 1:30 p.m. on the day of the Women’s March in Washington, D.C., I huddled with my group of students from the University of Pennsylvania alongside thousands upon thousands of other protesters. Our group tried to find a route around the gridlock, to no avail, when a Muslim freshman realized that the time for afternoon prayer had arrived. Lacking any means to exit the throngs, the student knew that she would need to pray right at the corner of Independence and Third, in the middle of the jam-packed protest.

In a crowd, reported to be larger than 500,000 people standing up for women’s rights, social justice and equality, a small group of students from the University of Pennsylvania held hands and created an opening for their fellow student to lay down her protest sign as a surrogate prayer rug and kneel to honor God. Amid the chaos, chanting and singing, our group maintained silence to enable worship.

Just eight hours earlier, these students had not known each other. They had merely signed up for an interfaith bus to the Women’s March, a collaboration of Penn Hillel and the Muslim Students Association. And yet, somehow, as if by osmosis and a call to a higher cause, these students became one community. This kind of rapid partnership is happening more and more at the University of Pennsylvania. Since the election, students have increased awareness of intersectionality — the interconnectedness of varying discriminated identities. Previously apathetic students now seem emboldened to serve as change-makers and activists. Those who in the past were content to spend time within their siloed cultural groups now hunger to be close to others, and commit to standing in solidarity with them.

Jewish and Muslim students, religious minorities who have historically struggled to connect because of disagreements on Israel, now are reminded of their shared vulnerability in Trump’s America. The president’s campaign promise to register Muslims and deport those who are suspicious evokes sharp memories for Jews, as have the comments on traditional Muslim dress like head-coverings.

Moreover, the rise of white supremacist sentiment and the prevalence of swastika graffiti across the country have revived fears of a new wave of anti-Semitism in America. However, it is not only mutual fear that brings together Muslims and Jews. More than fear, their recognition of intersectionality sparks new collaborations and cross-cultural exchange.

Mother Teresa is often quoted as having said, “If we have no peace, it is because we have forgotten that we belong to each other.” Indeed, as a Hillel rabbi I have felt tensions between groups of different faith and race, and the quickness of students to focus on the things that separate groups rather than the issues that unite them. Especially between Muslim and Jewish students, political tensions related to Israel or campus proposals for BDS create deep rifts, making it difficult to remember that we belong to one another. And yet, the post-election climate has produced a remarkable and rapid kinship among minority groups, the Women’s March being just the latest example.

At UPenn, when a hate crime was committed on campus in Trump’s name three days after the election, students from nearly every organization joined together for a vigil and solidarity walk. Similarly, when I started talking with students about taking a bus to the march in Washington, the conversation was not limited to the Jewish community. Rather, it focused on who our partners would be, with whom would we want to stand in solidarity and in protest. From a place of shared concern and shared belief the interfaith bus was born, to show that we belong to each other and we are stronger when we resist division.

We belonged to each other at 5 a.m., when the MSA’s Muslim chaplain described the power of beginning this journey at the last third of the night, a sacred time for Muslims when one is closest to Allah. We belonged to one another just before sunrise, when we laid out prayer rugs for Muslim morning worship. We belonged to one another at the Religious Action Center’s pre-march worship service, where we heard an insightful Torah portion, reflecting on the impact of a new and unknown Pharaoh. As we held up signs, as we huddled together, as we shared our stories, over and over again, we remembered that we belong to each other. Thank you, Mr. President, for the powerful reminder.

Rabbi Ilana Schachter serves as the senior Jewish educator/campus rabbi at Penn Hillel at the University of Pennsylvania. She was ordained as rabbi by the Hebrew Union College-Jewish Institute of Religion, where she also received an M.A.in Hebrew letters.