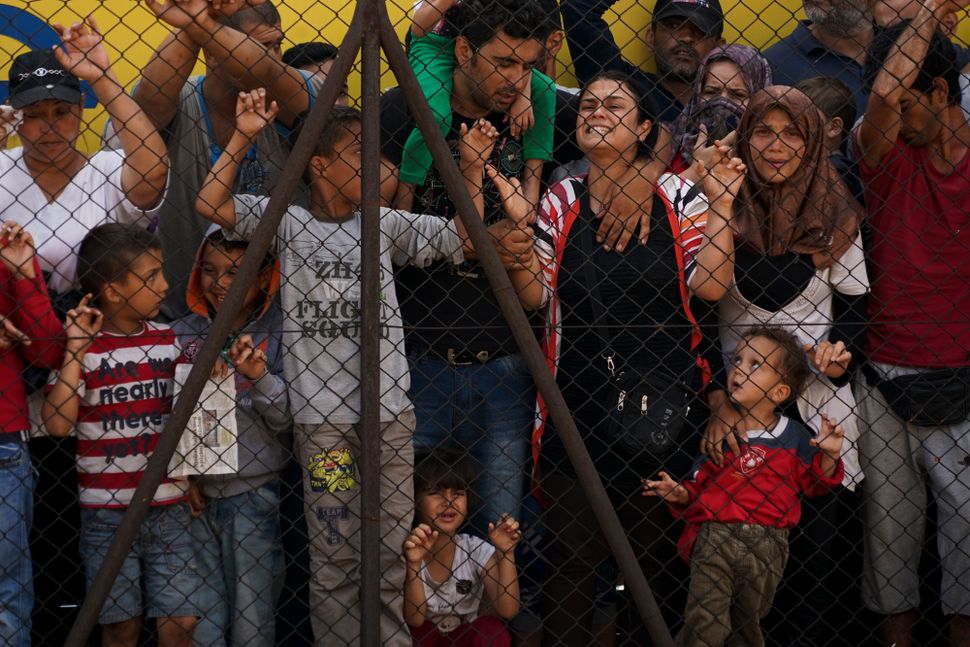 I’ll never forget the feeling of gratitude and the experience of fellowship that graced my home in 2015.

My family and I had been given the opportunity to host a recently settled Syrian refugee family for Thanksgiving. We said yes, but, admittedly, we did so with trepidation. Having internalized some fear of Syrian refugees after reading articles in the European news, I felt anxious about the risks of bringing strangers into the home I share with my wife and little children. Ultimately, though, we decided to shelter the Al-Wazer family, who had come to the United States only days after fleeing war-torn Syria. It was an unforgettable encounter.

Unlike my family, who live in relative comfort, the Al-Wazers had been through hell. While our kids had nary a care in the world, the Al-Wazer children had survived barrel bombs and constant close-encounters with death. I remember the young daughter of Mr. Al-Wazer lifting her shirt and showing us a scar across her belly, compliments of a bullet. They were grateful for any kindness.

Subsequently, we have invited more refugees to stay with us.

Over these past few days, I’ve meditated deeply on the meaning of these face-to-face experiences. These people were uprooted, having recently escaped the most traumatic experiences. As recently as mid-December, Syrian dictator Bashar al-Assad, in collusion with Russia, Iran, and Hezbollah, bombed the civilian population in Aleppo to such a brutal extent that Jens Laerke, a humanitarian spokesperson for the UN, called it “a complete meltdown of humanity.”

I recall this trauma as news breaks that President Trump plans to drastically limit the number of refugees from Syria and other countries granted entry into the United States. As many feared (or, sadly, hoped), he focused his energies on limiting these vulnerable individuals’ access to resources that could literally save them from death.

As Jews, we must be outraged at this blatant disregard for human dignity. The implications are stark: refugees, real people, will be forced to abandon hope, their inner humanity, and die, all because of xenophobia. The Jewish community writ large should be heartbroken that the normative leader of the free world intends to wield his immense power to break those who are weakest and most demoralized. The Jewish people have suffered enough to know what happens when refugees are denied sanctuary by the vagaries of myopic political expediency. Indeed, three out of four of my wife’s grandparents, my children’s great-grandparents, came to America as refugees fleeing their suffering within the concentration camps of Nazi Germany.

Trump’s executive orders also offend Jewish laws and ethics. We are currently reading through the early parts of the book of Shemot— Exodus — that instruct how we should treat the ger—“the stranger,” “the foreigner.” Moses’ own status as a refugee is discussed: “Pharaoh heard about the matter and sought to kill Moses; so Moses fled from before Pharaoh and settled in the land of Midian” (Exodus 2:15). As the Israelites—newly emancipated and ready to form a nation of their own—wander through the desert, they are exposed to new people with whom they are unacquainted. The Divine commandment emerges continually to ensure that strangers, immigrants, and refugees must be protected. Exodus 22:20 states: “And a stranger shalt thou not wrong, neither shalt thou oppress him; for you were strangers in the land of Egypt.” Dismissing their rights is akin to heresy. Indeed, this command is mentioned far more times than the commands to observe Shabbat or keep kosher.

Of course, owing to the presence of certain hostile factions, we should be cautious. But the current system of granting refugees entry into this country is already rigorous and demanding. Dangerous people are constantly rejected, screened out of the system. The disproportionate response from the Administration betrays political cowardice and will set the nation back in the eyes of the world. It’s anathema to our national character.

But there is so much we can do together to ensure that refugees from Syria or other conflicts can find safe haven in the “land of the free.” It is incumbent upon us, through interpersonal outreach and community action, to resist these harsh decrees and forcefully advocate for more refugee admittance.

We need to contact Representatives and Senators and remind them of their sacred role in respecting the humanitarian ethos of America. We should expand grassroots efforts to urge mayors and governors to make our cities and states places of sanctuary and inclusion. Our synagogues and Jewish community centers should also be literal sanctuaries. These actions, while modest, speak volumes when done, on a community basis.

Ultimately, we need to end the mass killings by the Assad regime, Iran, and Russia, which are the main cause of the Syrian refugee crisis. It should never had escalated to the point where millions of innocent people were displaced so a despot could remain in power. If we do not stop the conflict, there will be millions of new refugees.

The Book of Job states: “The stranger did not lodge in the street; my doors I opened to the roadside.” When our heart becomes the door to our soul, the rewards are great and the path is just. When I opened my door that Thanksgiving, I didn’t know exactly what to expect. But, through dialogue, food, and conversation, I gained a vital clarity that I didn’t have before. It is our continuing obligation to seek out and assist the huddled masses that only seek the space to grow and live in peace. Who are we to reject them?

Rabbi Dr. Shmuly Yanklowitz is the President & Dean of the Valley Beit Midrash, the Founder & President of Uri L’Tzedek, the co-Founder of Jews for Human Rights in Syria, the Founder and CEO of The Shamayim V’Aretz Institute and the author of ten books on Jewish ethics.